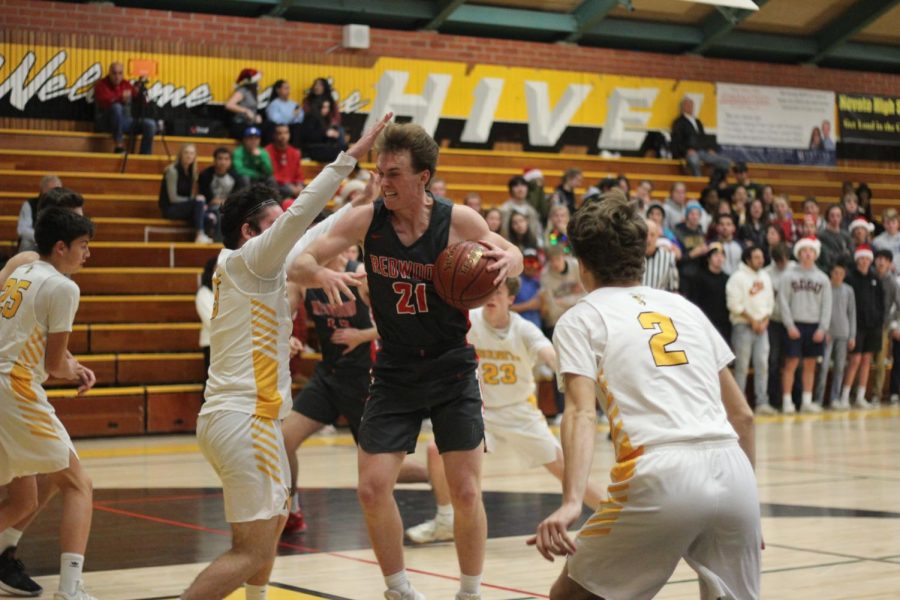 The Redwood varsity boys basketball team pulled out an outstanding victory against Novato High School on Wednesday, Dec. 12, 2018. The Giants started out strong, leading in the first quarter with a score of  22-11. However, with each quarter the game became increasingly more competitive as Novato quickly caught up by the second quarter.

By the second quarter, Novato surpassed Redwood, leading 24-23. This had the crowd and both teams on the edge of their seats as Novato quickly recovered from the first quarter.

Junior Pasquale Ancona felt that once Novato took the lead, it was a time for the team to come together and combine all their strengths in order to win.

“After the second quarter, we all got together and we knew we needed to work on our defense. Once we realized that we all worked together in order to make that happen, and once we got better it really helped us improve throughout the rest of the game,” Ancona said.

In the first half of the game, the Giants made 57.1 percent of their free throws which allowed them to outpace Novato.

After halftime, the second half of the game began with the Giants in the lead. In the third quarter, seniors Brandon Radu and Jake Matthews scored an outstanding amount of points, helping the Giants end the third quarter winning with a score of 24-18.

Junior Matt Shippey feels that once they had passed Novato on the scoreboard they regained their confidence.

“After coming back from the second quarter where we were losing, our team got our confidence back and I think that once we were feeling good about the game it really helped us pull through and keep doing well,” Shippey said.

This year the team plans to put in as much work as possible during practices in order to play the best they can. The coaches and the team hope that the Marin County Athletic League rankings will reflect their successes.

Last year the varsity team played Novato in their opening league game and lost, costing them the championship. Head coach Steve Compagno feels that the mindset of the team is really what will push them to hopefully be a leading competitor in the Marin County Athletic League.

“It’s all about our mindset, the kids really locked in, our defense needs some work, but offensively we really shot the ball well,” Compagno said.

In the fourth quarter, the Giants really pulled through and ended the game with a score of 92-75. Compagno is working on preparing the team for future challenging games to come.

The varsity boys basketball team will be playing their next game against Monterey High School on Saturday, Dec. 22, at 3 p.m.