The vote is in: America’s polling system is unjust 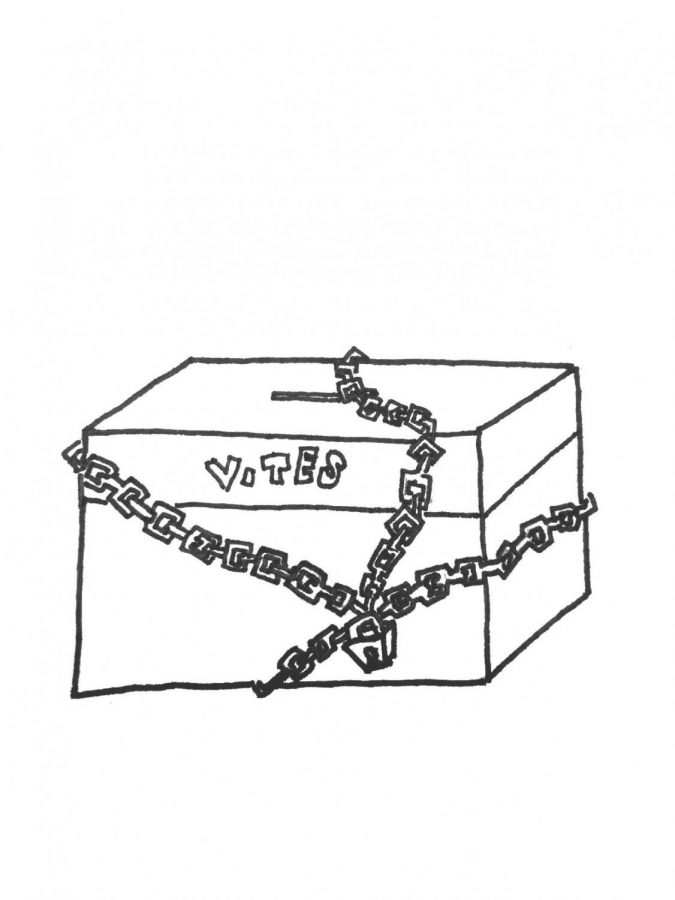 America is the land of a few distinct symbols: apple pie, hot dogs, baseball and most importantly, democracy. This country has grown with a foundation in the idea that all men are created equal, that everyone is entitled to life, liberty and the pursuit of happiness and that one man means one vote. But in reality, these ideas are not so simple. Often in our country, it is too difficult for members of minority groups to even vote in the first place, effectively eliminating these fundamental ideals of America that we so proudly boast.

A major problem for many American voters is voter identification laws that exclude large portions of people from being able to vote. In October, the Supreme Court allowed a new voter identification law to take effect in North Dakota, stating that identification must be presented with a residential address in order to place a vote. This greatly affected Native Americans, as many houses on reservations do not have residential addresses, but rather P.O. boxes. Given that Native Americans are the largest ethnic minority in North Dakota, standing at 5.4 percent according to the U.S. Census Bureau, this new law drastically reduced the representation of non-white citizens casting ballots. According to the New York Times, the lack of Native American voters swayed the election slightly, as most Native Americans in North Dakota vote Democratic.

Native Americans are not the only group impacted by this law. According to Project Vote, 17 states require a photo identification to be able to vote. This changes the face of the average voter as 13 percent of African American people and 10 percent of Hispanic people lack photo IDs, while only five percent of white people have no confirmed ID. Photo identification laws hit minority groups such as Hispanics and African Americans the hardest, even if they meet all other requirements, which contributes to the lack of representation among minority groups in national voting.

Besides a photo ID, a felony-free record is also needed to cast a vote in almost all states. The problem with this exists in the fact that minorities are more likely to be convicted of a felony than their white counterparts, according to the Washington Post. According to the Annual Review, incarceration rates are six times higher for African Americans than for white Americans. This has the power to affect the outcome of the elections—the Annual Review estimates that up to one million black votes were lost in major elections in the past years, most of which would have accounted for a democratic vote.

Still, simply getting to the polls is not the only problem with the voting system; there are ways to bypass the popular vote on a larger scale. Methods such as gerrymandering are used to allow one candidate to win where they wouldn’t have won the popular vote otherwise.

Essentially, gerrymandering is when one political party tries to condense the voters in one area to help ensure an election win. In this method, a political group changes the voting districts in order to help their own party or hinder an opposing platform. It typically occurs in one of two ways: packing, in which voters from an opposing party are “packed” into a few districts in order to concentrate their votes, and cracking, in which the largest party spreads the opposing party’s voters across multiple districts to dilute their influence. Using packing and cracking often gives more electoral votes to one political party to ensure that they win the election. A system such as this doesn’t represent the actual will of the people, and is only an incentive for political parties to put more effort toward gerrymandering than toward changing policies to gain them more actual votes.

In recent years, gerrymandering has been skewed to the Republican party’s advantage. According to the Associated Press Analysis, in 2011, up to 22 additional house seats were won by the Republican party than what would have been expected, a twist mostly due to the practice of gerrymandering. In fact, according to the Washington Post, a major operation called the Redistricting Majority Project allowed the GOP to gerrymander by using campaign money to gain control of state governments. This has allowed them to appoint the district lines since then and has helped them win elections because of it.

These problems are not without solutions. A very simple answer is for those with the power to vote to do so. Many states allow felons to vote after the completion of probation, and the power to vote is becoming more frequent. One example is shown in Florida, where the state recently restored voting rights to felons. This measure was on the ballot during the midterm elections, giving the common people an opportunity to make the voting system just a little bit fairer. New voter identification laws should be made and voted on. If a state does not have this option on the ballot, write to your representatives; make a difference.

The ability to vote no matter who you are is the basis of our modern society, and we pride ourselves on our democracy and freedom. But without change, we have no right to say that they exist in our country. Let’s make America the place it claims to be.