Finding the missing variable in disparities in math achievement 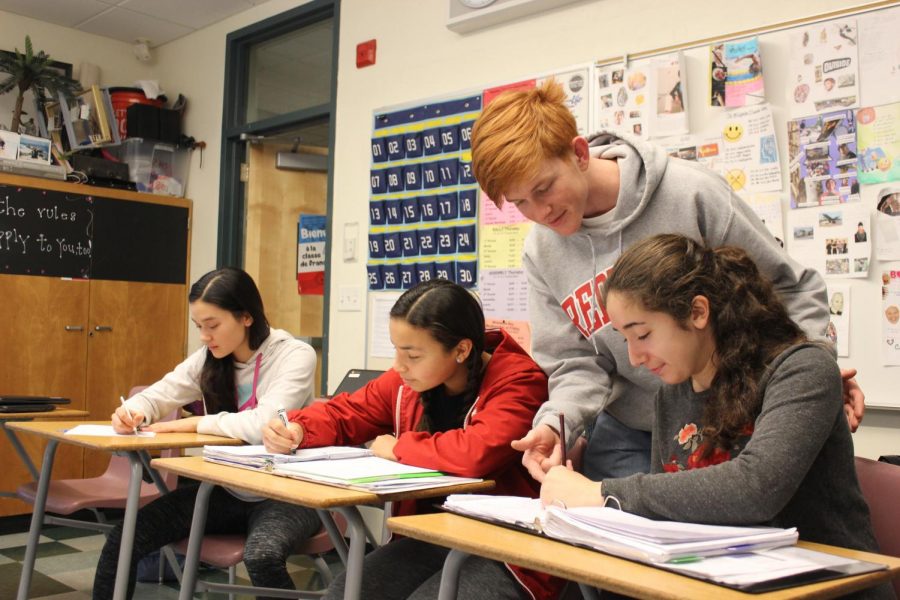 Working on providing better access to math classes for all students, the TUHSD has implemented various solutions

“[The United States] derives much of its strength from its core value as a land of opportunity … We know how to work toward the solution [of meeting this value]: access to a world-class education can help to ensure that all children in this country with dreams and determination can reach their potential and succeed,” the United States Department of Education’s website states. However, in America today, there is a glaring divide in the current educational system: different races are performing in schools at much different rates. Is this the “world-class education” that our country strives for?

Across the country, African Americans and Latinos are significantly behind their White and Asian counterparts in educational standards, especially math. Among eighth graders, the White-Black achievement gap, which is the disparity of academic performance between different groups, is 32 percent and the White-Latino achievement gap is 22 percent, according to the U.S. Department of Education.

One possible explanation for the achievement gap is that Caucasian students are “tracked” into more demanding courses, which in turn leads to Caucasian students learning more compared to their classmates of color, according to Stanford University professor Sean Reardon.

“The results of these descriptive analyses are unequivocal,” Reardon stated in an educational opportunity study published by the American Journal of Sociology. “Racial segregation is strongly associated with racial achievement gaps; and the racial difference in the proportion of students’ schoolmates who are poor is the key dimension of segregation driving this association.”

The disparity between race and math achievement does not exclude the Tamalpais Union High School District (TUHSD). In fact, according to District Superintendent Dr. Tara Taupier, while 95 percent of Asians and 87 percent of Caucasians meet the CSU/UC math requirement, only 68 percent of Latinos and 60 percent of African Americans in the district meet this requirement.

Senate Bill 359 was adopted by California in 2015 in order to help set guidelines to close the math achievement gap. According to the bill, students need to be placed in the appropriate math course in order to be given the best chance of success. The bill also mandates that schools give annual progress reports of math placement for all ninth graders.

“A pupil’s ninth grade math course placement is a crucial crossroads for his or her future educational success … Misplacement in the sequence of mathematics courses creates a number of barriers and results in pupils being less competitive for college admissions,” Senate Bill 359 states.

According to Taupier, the math class that a freshman takes is determined by their score on the Entry Level Math Assessment that they take in eighth grade in addition to their eighth grade math course. Students then verify that they are taking the appropriate course by a second assessment at the end of the third week of school.

“Tracking the students and using an assessment created by the current math department that places students in a math class and [notifies] teachers of where students have learning gaps has helped us target support to students in order for them to be more successful,” Taupier said. “It has helped us place kids slightly higher than they might have been placed and overall makes them more successful, which are other goals of the assessment as well.”

While this assessment does provide a platform for students to succeed in math, the achievement gap in math between races still persists.

“One of the ideas [to help more students succeed in math] is that if we can make sure that kids are ready to be successful in Algebra and target those populations, that will improve mathematical outcomes down the road and make sure they have access to higher level math courses,” Taupier said. “We also have a math task force that looks at data across the years.”

“To succeed in mathematics, especially higher-level mathematics such as Advanced Algebra and Calculus, all students must have access to and succeed in such gateway courses as Algebra,” Holloway said.

The TUHSD does provide that gateway opportunity for all of its students, but Holloway believes that there are other components of students’ education that are necessary to be successful in math.

“Research has shown that we can improve the chances of success for achievement in mathematics for all students. But this can only occur when schools provide students with a rich standards-based curriculum, aligned and articulated across grade levels, that supports high expectations for all students,” Holloway said. “This curriculum, combined with greater teacher sensitivity to the needs of minority students, can become a powerful force in closing the mathematics achievement gap.”

Freshman Valentino Starbird experienced the benefits of getting the necessary tools to succeed in Algebra when he attended Del Mar Middle School.

“Going into eighth grade, math was hard because I wasn’t taught everything I needed to know. In eighth grade I was caught up because the teacher helped me a lot; it was more one-on-one since it was a small class,” Starbird said.

Now taking math in high school, Starbird feels comfortable and prepared because of the help he received and classroom environment he was in during eighth grade.

“Algebra now is not super challenging. In eighth grade, I was really taught the basis for math so now this year I have a head-start in certain topics. My goal now in high school math is to just progress and go as far as I can,” Starbird said.

The TUHSD is working on closing the gap between math placement and race in multiple other regards. According to Taupier, the district will be making the curriculum more uniform across the district by identifying what students need to learn and to what extent they need to learn that content. The rigor level will also be similar across the district. The math team has completed this work and is currently implementing and evaluating the work they have conducted.

According to Taupier, Tamalpais (Tam) High School, the school with the widest gap in student preparedness for math, has been working with two of their feeder schools in Marin City and Sausalito.

“They work together in what they call the Math Success Network, a collaboration among Tam and the other schools to make sure that our curriculum is aligned and to track student progress from the end of sixth grade through entrance to high school to see if we can target interventions,” Taupier said. “We make sure all students coming into ninth grade are prepared to be successful in Algebra because we saw students from those two schools disproportionately placed into Algebra Foundations.”

While the district is mainly trying to ensure that students in all math courses are sufficiently prepared for the next level, their interventions still target bridging the math achievement gap between races.

“There has been ongoing efforts at many levels in the math department to ensure first that all kids have the same learning outcomes in each course and that we’re able to provide support to students who aren’t as successful. The idea ultimately is to improve all outcomes in math while narrowing the achievement gap among the various [two] groups,” Taupier said.