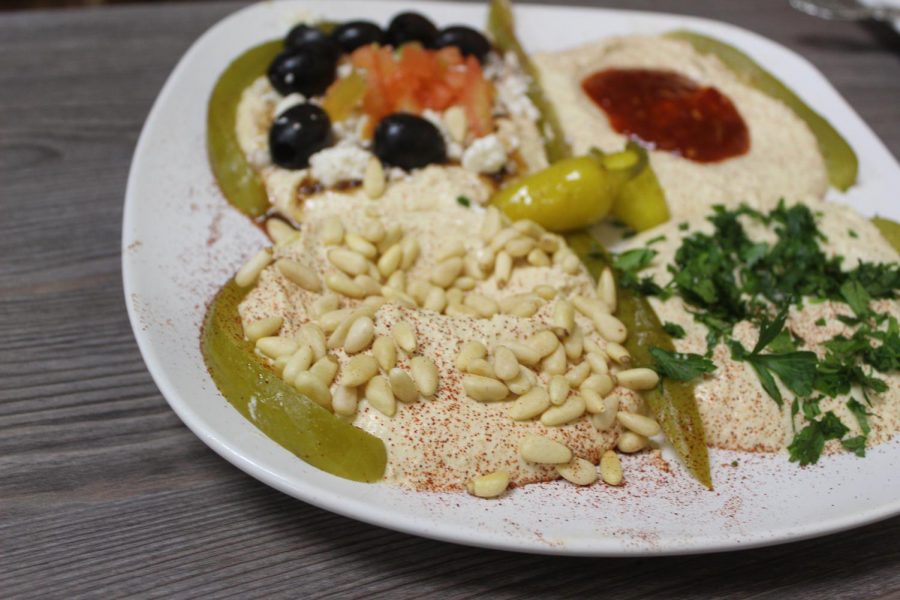 I’d like to think that there are two types of people in the world: the hummus enthusiasts and the hummus haters. I happen to be the former. Naturally, when Julie’s Hummus Bar opened in San Rafael, I couldn’t resist chasing the chickpea.

Upon arrival, I noticed the glowing yellow sign on the exterior and the brightly-colored murals on the interior. The vibrant decoration paralleled with the bold flavors and the welcoming staff. Julie’s Hummus Bar combines a casual dining experience with a refined culinary journey.

As soon as I stepped up to order, I was greeted with a genuine smile. I placed my order, sat down and received the plates in no more than 10 minutes. While waiting for the food, a cordial man introduced himself as Peter, the father of Julie (co-owner) and finance manager of the business. He welcomed me to the new restaurant, explaining the history of the place and thanking me for coming.

I learned about Elias and Julie Haddad, a couple who have a true love for each other and for Mediterranean cooking. They took their passion and created the very hummus bar that I was pleased to visit. This simple, sweet story further enticed me to try the food.

The first dish that arrived was tabouli salad, consisting of uniformly-chopped tomatoes and green onions, cracked wheat, parsley, lemon, mint and olive oil. The succulent ingredients were refreshing and light, with a tangy taste and acidic notes. Each bite included perfectly crisp and pungent components, satisfying my taste buds.

Next, straw baskets filled with fluffy pillows of pita bread were placed on the table. They were fresh off of a panini press, with a warm-to-touch, lightly-browned exterior. I carefully pulled one apart, and the soft pocket opened gradually, as if in slow motion. The pita was airy and delicate, a perfect complement to the array of hummus that followed suit.

Out of the 10 options, I sampled the pine nut, cilantro, greek and spicy hummus. Each one had its own combination of flavor and topping. The pine nut hummus was smooth, contrasted by the crunchy pine nuts sprinkled onto the surface. Meanwhile, the cilantro hummus was zesty with hints of citrus and garnished with fresh pieces of cilantro. The greek hummus took another route, with creamy elements from the cheese and briny bursts from the olives placed on top. The spicy hummus stayed true to its name, providing a surprising kick of heat from a salsa-like sauce spread on top of the hummus.

While the hummus was a perfect accompaniment to the pita bread, Peter also presented me with a thyme and sesame olive oil to pair with the bread. Earthy tones exuded from the peppery oil, and each crevice of pita was filled with a ripe piquancy.

After enjoying pita, hummus, olive oil and tabouli, I was ready to try my first falafel. My expectations were exceeded as I bit into the crispy shell lined with sesame seeds. The chickpeas in the falafel provided a nuttiness to the dish contrasted by an immediate warmth that emerged as the soft interior melted in my mouth. I dipped the falafel into tahini—a sesame-based sauce—which acted as a cooling constituent to the warmth of the fritter. Pickled radishes were an appropriate garnish for the falafels, complementing them with a sharp spice. From crunchy to smooth, acidic to creamy and spicy to refreshing, the dynamic between the senses is prominent at Julie’s Hummus Bar.

This dynamic was accentuated as I poked my fork into a tender piece of chicken from the Chicken Shawarma Plate. The grilled meat was cut into small pieces, with a golden color on the surface. The chicken was cooked skillfully: juicy and enshrined in spices. As if the chicken wasn’t enough on its own, there were slices of red onion and a drizzle of tahini on top of the meat, that presented new textures and tastes. The subtle sting of the onion balanced out with the mild, velvety sauce and the umami of the poultry. A bed of yellow rice provided a starch to the meal, while also delivering a soft and comforting element to the dish. In addition, fresh lettuce and ripe tomatoes contributed to the plate, acting as an aqueous aid. Each ingredient seemed purposeful, and each ingredient was effective.

At this point, my stomach was satisfied and my palate felt cleansed. Julie’s Hummus Bar receives a 10/10 from a wholehearted hummus enthusiast. Not only did the hummus impress, but so did each other menu item that I tried. If you are ever in the mood to munch on a magnificent Mediterranean meal, head on over to Julie’s Hummus Bar!