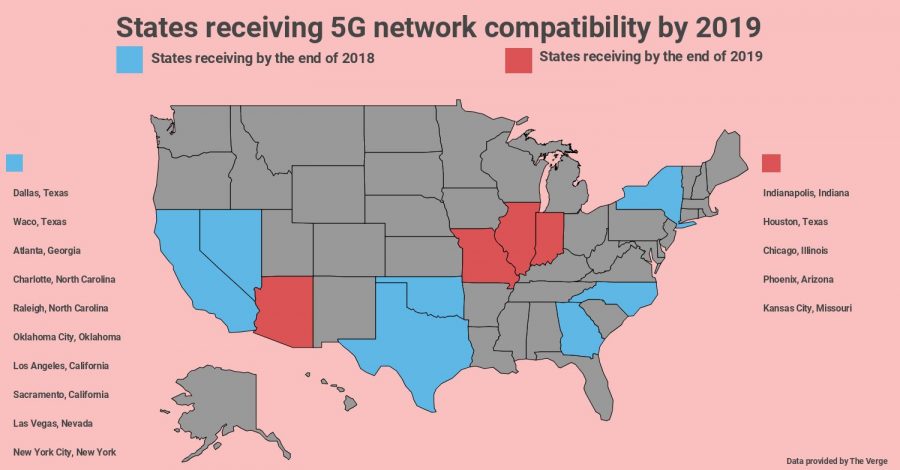 A map showing every location receiving the 5G network in the next 2 years.

Marin County has recently joined a coalition with more than 20 cities and counties in the US to oppose new regulations proposed by the Federal Communications Commission (FCC) regarding the next wireless network, 5G. A step up from 4G, it is a new wireless network that would improve internet speeds, replace cables and increase data response time, but is receiving backlash across the country due to safety concerns and government regulation. To fight the network implementation, cities and counties are joining coalitions as part of a formal process to challenge the rulemaking process of the FCC, giving areas an option to pursue litigation later on.

Ann Morrison, vice mayor of Larkspur, said that the Emergency Medical Services (EMS) safety network has expressed concerns based on new forms of radiation being emitted from the 5G poles.

“EMS sent us emails saying that supposedly the new towers can increase cancer risks and other health problems because of the electromagnetic field. They say that exposure to the radiation can cause headaches, anxiety, memory disorders and heart and sleep problems,” Morrison said.

She said that although Larkspur has not addressed the 5G issue yet, they are sure to do so soon.

“When I am mayor next year I will ask for the cellular companies and EMS to come and talk it out with me… I will try and learn as much information as possible to make an informed decision with my other council members that is best for our community,” Morrison said.

In the past, when improving the wireless network from 2G to 3G to 4G, all that was needed was to roll out the new network on existing frequencies and hardware. According to CNBC, 5G networks require a frequency with a much larger bandwidth than past networks, and as a result require  new hardware such as antennas and poles.

Because 5G is a major step up from the current 4G, the FCC has proposed completely new regulations, which restrict local control of the network and its hardware, and require certain new fees. The FCC’s harsher regulations and some potential health risks from the new hardware are what pushed Marin to join a coalition to oppose them according to Morrison.

The county’s decision to join a coalition applies to all unincorporated areas in Marin. Areas in Marin that are towns, like Fairfax and Larkspur, can make decisions regarding certain topics on their own. The town of Fairfax has recently joined the same coalition as Marin, on a similar basis of unfair regulations and health risks according to Mayor Peter Lacques.

“There is a lot of concern about the FCC’s ability to honestly look out for public safety issues because the regulatory process is compromised by close relationships to telecom companies. And the latest regulations proposed by the FCC further limit local jurisdictions’ ability to regulate services. That’s why Fairfax and dozens of other cities and jurisdictions have joined coalitions to challenge the FCC rulemaking process,” Lacques said.

The mayor also stated that besides joining the coalition, Fairfax has put other precautions in place to increase safety.

“In Fairfax we have added some real safeguards to address safety concerns. We have a rigorous application program to ensure the poles are safe from fires or earthquakes. The poles are also not allowed in residential areas and must be 1,500 feet apart,” Lacques said.

An implementation of the 5G network will improve devices’ response time to 400 times faster than the blink of an eye, according to CNBC. It will also allow users to download a movie in just over 3.5 seconds, compared to 6 minutes on 4G. To accomplish this, new hardware including antennas, poles and boxes need to be set up which are part of the problem.

Marin General Service Authority (MGSA) owns around 80 percent of the street lights in the entire county, some used to house electrical equipment for cellular networks. Michael Frank, the executive director of the MGSA, says since they own the poles that the network requires, but are a government agency, they have been thrust into a neutral zone regarding the controversy..

“We own about 16,000 street light poles in Marin, and the telecom companies want to use them to implement the 5G network. . . So legally we are not allowed to locally have anything to say about things such as potential health risks,” Frank said.

The executive director also said the FCC regulations erase current relationships that the MGSA has with telecom companies, and may mean they will receive less money..

Wireless carriers have announced plans to start rolling out the 5G services to a handful of cities by the end of this year, except you need a 5G eligible device which tech companies have not started selling in stores.