Flag on the play: Fantasy Football is holding back team spirit 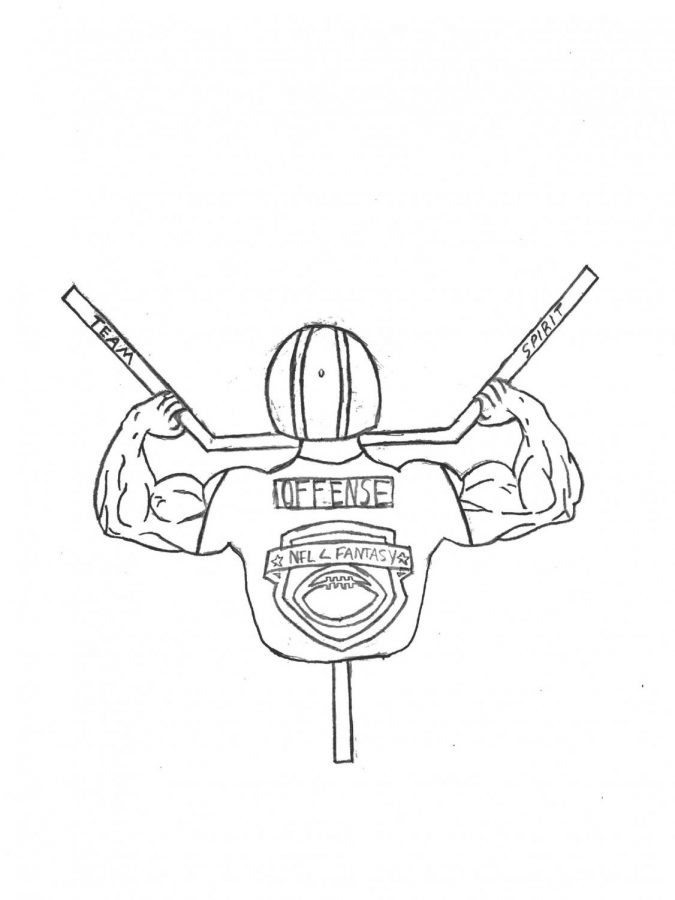 Fantasy football has grown to become one of the most prominent yearly traditions among all age groups and genders. According to a December Bark survey, 71 percent of Redwood students self-reported either that they play or know someone who plays fantasy football. High school students aren’t the only ones hiding games under their desks either—fantasy football is played by an estimated 33 million people in the United States and Canada yearly, according to Forbes. Fantasy owners gather weeks before the first regular season game of the National Football League (NFL), fully dressed in football attire, prepped with player reports and ready to bring home their league title once and for all.

Ever since the creation of the first publicly-available free fantasy football website in 1997, the fictitious game has not only consumed football lovers, but slowly degraded team spirit by shifting fans’ support away from a singular team and towards a handful of offensive players. With this shift in fandom comes severe consequences for certain players and the NFL as a whole.

This trend of a dwindling fan base can be seen in the decline of viewers for football games and an increase in viewership of fantasy football shows. According to Business Insider, the NFL’s television ratings have plummeted over the years, going from 17.9 percent in 2010 to 14.8 percent in 2017. On the other hand, shows such as NFL RedZone and NFL Sunday Ticket, which focus solely on touchdowns and offensive players, have boomed since their creation in the late 2000s, overtaking the popularity of broadcasted football games. For fantasy owners, NFL Redzone and NFL Sunday Ticket are the keys to being able to access all games and big plays at once. Because this simplified version of football broadcasting is targeted directly at fantasy owners, it has dragged more and more football aficionados into the dark world of fantasy.

With the extreme gratification that comes with watching one’s fantasy football running back plunge into the end zone comes unprecedented repercussions. One of these repercussions is the loss of team spirit, especially among younger generations who have been exposed to fantasy football for their whole lives. According to Brendan Dwyer, an associate professor of sports leadership at Virginia Commonwealth University, ever since the creation of fantasy football, the vast majority of football connoisseurs have become less invested in their favorite teams and progressively more preoccupied with the performance of the individual’s players on their fantasy team.

“I think the NFL, in the long run, is going to have a brand-consistency issue because people are not going to be interested in who wins games anymore. I saw how people behaved during the games at sports bars. I saw how torn they were, and I saw the cognitive dissonance they felt in watching both their favorite team and their fantasy team,” Dwyer said in an interview with Slate Magazine.

Such division of loyalties has not only diminished team spirit but also the pockets of the NFL. In 2007, as fantasy football began to take off, real-life game attendance began to decrease. According to Sports Business Daily, game attendance has been steadily decreasing by around three percent annually since 2007. With insufficient attendance at games comes less income for NFL teams, jeopardizing everything from the waterboy’s job to the salary of a franchise quarterback. Despite the decrease in game attendance, ticket sales are little more than a rounding error on a typical NFL team’s balance sheet. It’s TV that makes the money. According to Forbes, the NFL racks in an estimated $7 billion every year from TV channels purchasing the right to broadcast games. However, due to the rising popularity of fantasy shows, the NFL has been losing millions of viewers, thus losing more money.

Don’t get me wrong, I love the concept and competitiveness of fantasy football, but despite my passion for the fictionalized game, I know that it is deteriorating the traditional values of a deep-rooted team spirit, jeopardizing the NFL’s revenue and taking away recognition and money from well-deserving defensive players. If football lovers, like myself, truly want to preserve the love and loyalty to our cherished football teams, we need to shy away from digitized games that are slowly ruining America’s most beloved sport.