Measure J’s impact will be felt in TUSHD schools

During the Nov. 6 election, Measure J passed with a majority vote of 72 percent. The purpose of the measure, a widely debated additional tax initiative, is to protect high-quality education by levying a $149-per-parcel tax (exempting senior citizens), which provides $5.1 million annually for four years to the Tamalpais Union High School District (TUHSD). Without the tax, many teachers, counselors and other staff in the TUHSD would have to be laid off as the district faced a daunting budget shortage. Art and music programs are now protected, and relatively small class sizes will be maintained. The passing of the tax ensures that students will continue to receive a aristocratic education for years to come according to the measure’s stipulations. 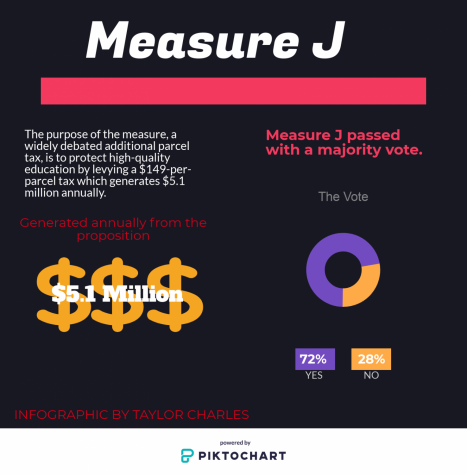 AP US History teacher Ann Jaime is supportive of the benefits the tax has on the district.
“[Measure J] helps our school district because we are currently running under a little bit. Measure J gives us the necessary funding that doesn’t completely solve our problem, but goes a long way to help what could have been catastrophic layoffs to faculty,” Jaime said.
Student enrollment at Redwood has grown dramatically over the past few years from 1,604 students in 2014 to 1,836 students in 2018. It is expected to continue to follow an increasing trend, especially considering the 30 percent increase in student enrollment in the last seven years. At the same time, revenue supporting the district has not kept pace with the true cost of educating students. These factors have led to the current expected budget deficit in 2018-19 of $1.9 million according to the TUHSD audit report.
Steve Abbott, father of junior Sam Abbott, would usually be opposed to tax additives, but he supported Measure J because of its positive implications.
“Normally I would vote no on increasing tax initiatives, but I feel differently about education because the dollars are directed specifically for the local community and my son,” Abbott said.
Another implication of the new tax is that it also supports programs for students such as career and college preparation and counseling programs. The tax will also retain school libraries.
All of the money raised by the tax will be controlled sectionally and will go to local schools. Additionally, it cannot be used by the state of California. By law, none of the money raised by the measure could ever be used for salaries or benefits for administrators. The measure requires independent citizen oversight and annual audits to ensure all funds are spent as promised, according to the County of Marin.
History teacher and union representative Ted Brown sees measure J as necessary to help students and teachers, as well as to support the many programs Redwood offers.
“It’s a necessary shot in the arm that we needed to take,” Brown said. “It doesn’t fully fulfill the need of the school, but it’s a step in the right direction.”