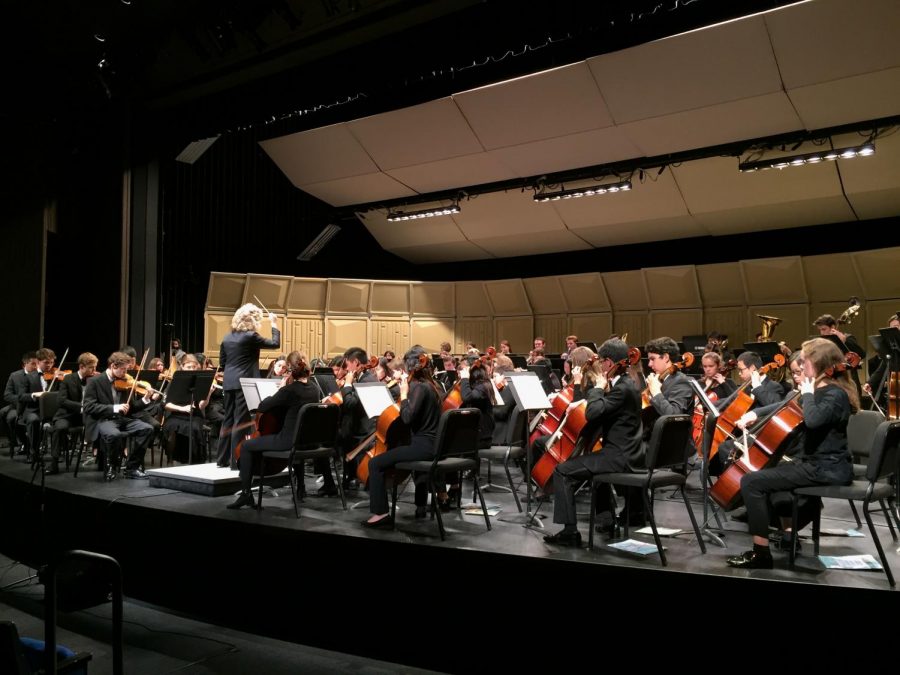 On Sunday, Dec. 2, the Marin Symphony Youth Orchestra (MSYO) performed their first concert of the year at College of Marin’s James Dunn Performing Arts Theater. Many Redwood students participated, playing instruments ranging from the clarinet and flute to trumpet and percussion. MSYO only has three concerts this school year and has been preparing for their December concert since September. Often times, the music the orchestra plays is composed by well known musicians such as Beethoven. Different from the music they usually play, this performance included music by less famous European composers.

The first song of the performance was an overture to The Barber of Seville by Rossini. This set the scene for the rest of the show which included songs describing scenes of places in Europe such as Seville. Next, a song called Vltava No.2 by Smetana was played. This song describes the flow of Europe’s famous Vltava river with dramatic sounds of brass instruments and the light tones of wind instruments. A song by Brahms, a German composer, was played right before the intermission. After the intermission, they played their last song, The Peacock, which is a Hungarian folksong, to wrap up the performance.

The students of MSYO were pleased with the music their conductor choose, because it was unique compared to the music usually played. Redwood senior Achinthya Poduval, who joined MSYO as a sophomore, enjoyed being introduced to new European composers of music in this performance.

“The music chosen was really interesting this time. Since we are touring Europe this summer as an orchestra, our conductor picked famous European composers and music that is popular to the areas we are visiting. Some places we will be touring this summer are Budapest, Vienna, and Prague,” Achinthya said.

Achinthya has been playing percussion since 5th grade and loves the fact that new music is used in each MSYO performance. Although performances can be nerve-racking for Achinthya, he enjoys the overall experience of sharing his work with a public audience.

“I like the fact that at concerts everyone in the orchestra is focused, and we are in a more organized environment than we are at rehearsals. Concerts give us the ability to show our family and friends what we have been working so hard on since rehearsals began,” Achinthya said.

Due to the smoke from the Camp Fire, a few orchestra rehearsals were canceled prior to the performance. Although this was a slight setback, the musicians were able to come together and still put on a successful show. Senior clarinetist Jack Suchodolski stressed that the missed rehearsals did not get in the way of a strong performance.

“It’s always interesting to see where people are at when rehearsals are missed, like who has been practicing on their own and who hasn’t. We missed a few rehearsals, [but] we are a youth group, so performances are never going to be perfect. We are usually always able to put on a good show,” Suchodolski said.

MSYO participants span a wide age range, from seventh to 12th grade. This allows for a diverse community of musicians to perform together. Because MSYO is for more advanced musicians, the orchestra is able to bond over their common dedication to music. Freshman Agneya Poduval, who plays percussion like Achinthya, always looks forward to making music with the people he has met from the orchestra every Sunday in preparation for performances.

“It’s pretty cool to meet new people that have the same interest and motivation as you. We all have the same goal of furthering our musical abilities. Since I play percussion, I am usually in the back and talk to the brass players the most, but I try to communicate with all of the musicians,” Agneya said.

This performance was a stepping stone for future performances by the orchestra. It exposed the musicians to famous composers of Europe which they will be learning about more this summer on their tour. The Redwood students of MSYO will perform two more times this school year. The next concert will take place on March 24 at the Marin Center Veterans’ Memorial Auditorium. Their last concert will be in the spring on May 5 at College of Marin.