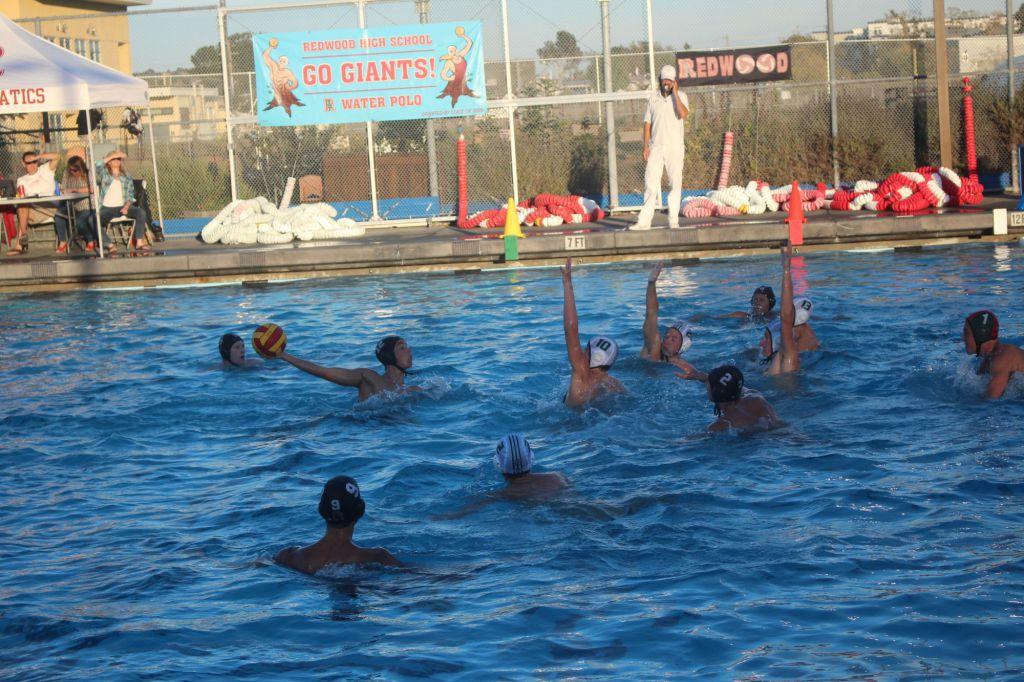 On Tuesday, Oct. 23, the boys’ varsity water polo team suffered a devastating loss to their rival, the Drake Pirates. This was only their second loss in MCAL’s, which dropped them to third place.

The Giants started trailing early in the game and were down 5-0 at the end of the first quarter. From then on, they tried to dig themselves out of the hole but were unsuccessful due to mental obstacles and lack of defensive communication.

The team was missing star sophomore setter Tommy McKnew, who has excelled this year and has become a key player to the Giants’ offense by leading the team with 48 goals. Even though Coach Rudy Kardos believes that they could have played a better game, he acknowledges that missing McKnew messed with the team mentally.

“The kids were a little down because our starting center was not allowed to play [because] he had to sit out a game. We just didn’t walk into the game with our head in it, which showed in the first quarter. We had several goal scoring chances that we did not take advantage of, shooting right at the goalie and that just set the tone of the game,” Kardos said.

The Giants gave their best effort in making up for the loss of McKnew in the second quarter, but their push was too late as they fell 11-5. Senior captain Ely Seldon scored three times and senior captain Tor Parawell scored once in the third quarter. With only a short amount of time left, senior Owen Henderson scored a backhanded goal that riled the crowd and boosted his fellow teammates’ morale.

Although the Giants lost, Kardos was impressed with Parawell and Seldon’s performances and said the captains always show dedication to the sport, giving it their all even when trailing by such a large margin.

Although the captains have lead the team in performance improvement throughout the season, Kardos believes the team’s greatest advancements were present in the last few regular season games, including the emergence of star players. For example, McKnew has surfaced as a crucial goal scorer, which has caught even him by surprise.

“I did not think I was going to play that much this season as a sophomore, but the tables turned and it was good. I feel happy about this season,” McKnew said.

McKnew’s stellar performance can easily be traced back to the effort he has put into the sport and even his work with the Olympic Development Program, which helped him with his skills and shots. The extra hours have lessened the intensity of the switch from JV to Varsity.

“I feel like a lot of the seniors have helped me to affiliate myself with the Varsity players who are a lot bigger than the JV players. At practice a lot of them are supportive and help me out by giving me tips and helping me workout,” McKnew said.

McKnew was unable to play in the matchup versus Drake due to a controversial foul in their last game against Palo Alto in which he was ejected. But with him back in the lineup, Kardos has confidence for their next game against Tam, a team they lost to 11-9 earlier this season.

Although McKnew’s absence affected the team’s focus, Parawell believes that the Giants will be able to enter their next match with a clear headspace. This is Parawell’s second year being captain and he tries to set an example for the younger players by helping out one another. This has lead to an increased drive to win in the team and a supportive team atmosphere which is reflected by their companionship at practice.

“This past season I have always been the last guy out of the pool and to clean up the lane lines which has rubbed off on the team and helped us gel and come together, which really helps when we are playing,” Parawell said.

The ideal teamwork that fell short against Drake is something the Giants hope to not repeat against Tam. Parawell thinks that they need to adjust defensively in order to compete with future teams in the MCAL playoffs.

“Against Drake we were too focused on our individual matchups and struggled helping out our teammates. So for Tam we are going to need to help out defensively and have more defensive awareness,” Parawell said.

The team plays their first game of MCAL playoffs at Tam on Thursday, Oct. 25.