Gender and funding of Redwood sports- a look into Title IX 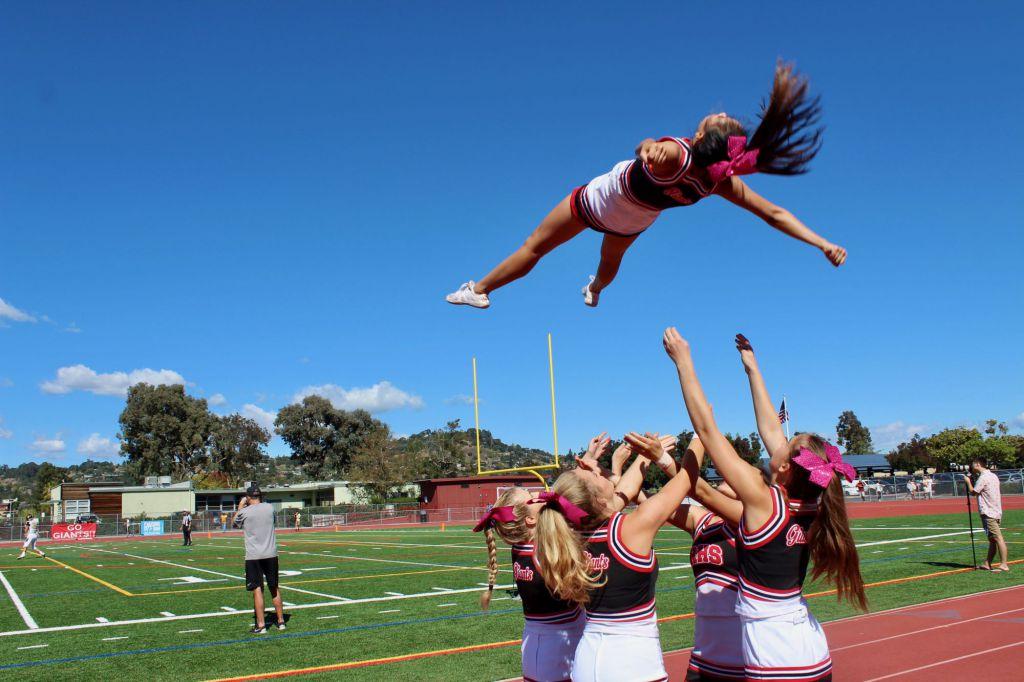 Cheerleaders practice stunts on the sideline.

On a concealed page of the Tamalpais Union High School District (TUHSD) website are the guidelines, rules and procedures to protect students, teachers and administrators against sex-based discrimination under Title IX of the Education Amendments Act, more commonly referred to as Title IX. According to the TUHSD website, Title IX “prohibits sex-based discrimination in all educational programs and activities, including athletic programs.” At Redwood, Title IX is most commonly related to harassment incidents and is less acknowledged as pertaining to athletics.

Before the implementation of Title IX in 1972, the climate for female athletes largely contrasted its present state. According to The Atlantic, in 1971, only 294,000 girls played high school sports compared to over 3.2 million in 2011. The jurisdiction of Title IX has also been expanded by the Civil Rights Restoration Act in 1988 and the Equity in Athletics Disclosure Act in 1994. At Redwood, an increase in female sports participation has been exemplified by the addition of female golf, freshman basketball and field hockey teams. In addition, Redwood also allows girls to play male-specific sports such as football, although according to the California Interscholastic Federation (CIF) records this has never occurred.

According to Wesley Cedros, the district’s Senior Director of Student Services and one of two Title IX coordinators, TUHSD has received few to no Title IX violations related to athletics.

Although TUHSD may have never violated Title IX, male sports receive more funding than female sports every year. Title IX does not require female and male sports to receive the same amount of money; however, it does require equal treatment and benefits. It is debatable whether the large gap between male and female sports funding is resulting in equal benefits. Cedros believes that a larger portion of the athletic department’s budget may go to male sports because sports such as football are more expensive to run.

According to Athletic Director Jessica Peisch, football protective equipment such as helmets and shoulder pads need to be reconditioned every year to comply with CIF rules. This process is expensive and requires the equipment to be analyzed at a lab, after which the majority are deemed unusable and new equipment is purchased. Because of this, football is the most expensive Redwood sport.

“If we’re looking at the overall amount spent on boys sports and the overall amount spent on female sports, it’s going to be really hard to have those numbers be completely equal as long as football is in the equation,” Cedros said. “If we’re looking at the same sports, [male and female], those amounts that are spent should be pretty equal, and to my knowledge they are.”

The athletic department has a tight budget and is only able to fund items necessary to play each game. According to Peisch, these necessities include officials, league dues, section dues, CIF dues and equipment required to play games. The department relies on Benchwarmers, a committee within the Redwood Foundation, to fund items not covered by the athletic budget that are deemed worthwhile. This includes anything from matching warm-up outfits to bus rides to out of county non-league games.

“Our [athletic budget] goes to necessities… I would say boosters go above and beyond,” Peisch said.

Both the athletic budget and Benchwarmers allocates funds on a need basis with the goal of providing teams with all items needed. Benchwarmers and other booster groups, some designated to specific sports, allocate funds to teams indirectly through the athletic department, and therefore also comply with Title IX. Any team, regardless of gender, can request funds and will be answered if the item is beneficial to the current team. However, it is possible that certain expenses have been overlooked.

“The school is willing to pay for them to get a bus when they could easily carpool like we do, and then when we ask for a bus they don’t want to give us one,” Trahms said.

According to Peisch, buses used to transport most athletes to out-of-county league games are funded through the athletic budget, while buses used to transport football players and cheerleaders to out of county, non-league games, including playoffs, are funded partially through Benchwarmers and partially through another booster organization called Pigskins.

“We have no problem with funding a bus for cheerleading to join the football team out of county. We could find funding through our boosters,” Pesich said.

Although the specifics of funding and allocation of those funds can get complicated, what the athletic department deems most important is that all teams receive funding to purchase necessary equipment.

“We’re so fortunate where that [a Title IX violation] should never happen here. If it’s something that is reasonable and the team needs, we’ll find funding for it… I don’t think a team should ever be in that situation where they don’t have funding for specific items they need,” Peisch said. “At our school, we’re very fortunate that a team doesn’t ever need to go without what they need.”

According to Peisch and Cedros, Title IX is not taken lightly at Redwood. This can be seen not only through a perfect record but also through the dedication of staff such as Cedros and Peisch.

“Title IX compliance in regard to sports is a collaboration because as the Title IX officer, I am not personally out there…making sure an equal amount is being spent between teams and things like that,” Cedros said.