Construction on Bon Air Bridge to span over four years 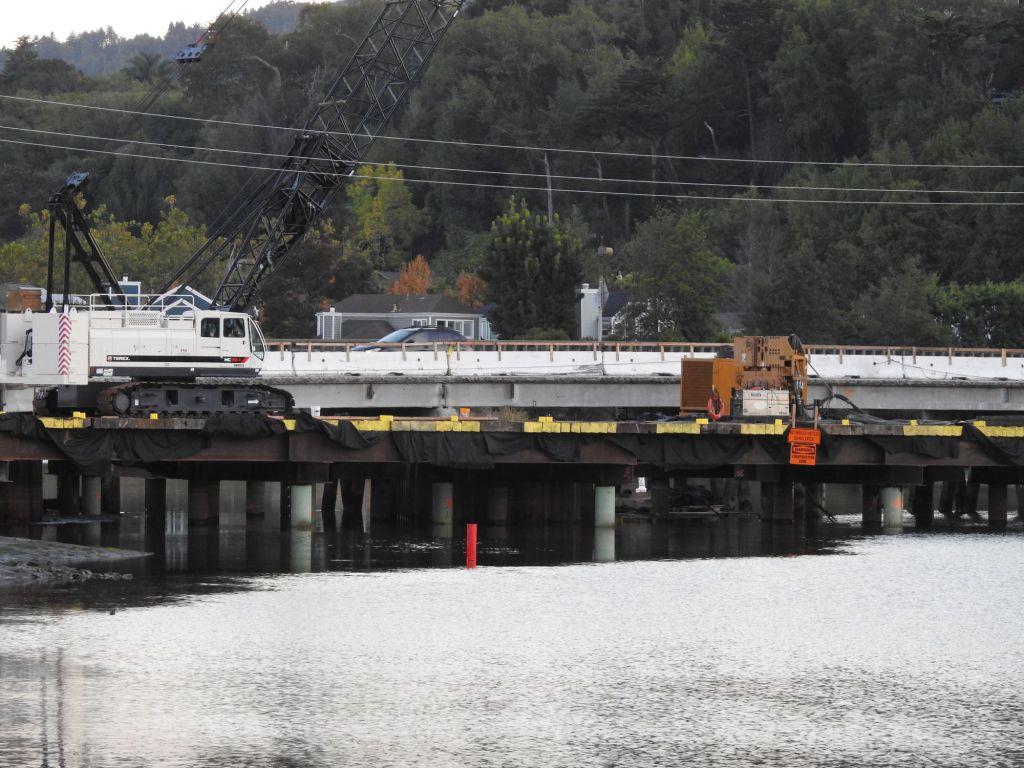 Construction on the Bon Air Bridge in Larkspur began in June and is now in full swing. Traffic has been rerouted to adjust for the work being done along the bridge and Bon Air Road, and crews have moved all of their equipment into the area. The contract for the project, awarded to Golden State Bridge Inc. after their $26.7 million bid in March, will run for four years and one month.

According to Director of Public Works Julian Skinner, the existing bridge will be completely replaced with a new cast-iron girder

bridge (one that uses girders, or beams, to support the bridge and cast-iron for the framework). This bridge will be much wider in order to accommodate 10-foot-wide multi-use paths and 7-foot-wide shoulders on each side. As for disposal, Skinner said the concrete from the current bridge will be crushed and then recycled piece by piece.

The plan is for the northern half—the end closest to the Marin General Hospital—to be built first, then focus on the southern half, closest to Magnolia Avenue. According to Skinner, the area is being updated for regulations before construction continues.

“All the work that they’re doing now is all of the foundation work, [including] putting piles and supports into the [Corte Madera] creek,” Skinner said. “The project footprint expands out to Magnolia [Avenue] and it will also extend out to South Eliseo [Drive] on the other side, so those signals get updated and the intersections get repaved or reconfigured slightly so that they meet all of the current ADA [Americans with Disabilities Act] standards.”

While traffic around the area has increased, Skinner said that the bridge will only be completely closed at three separate times over the duration of the project, hopefully during weekends. These closures are roughly scheduled to begin a year and a half from now, and will be spaced throughout the remaining duration of the project.

Although some complaints have arisen, Vice Mayor of Larkspur Ann Morrison said that this is a vital project that has generally been well-received by the public.

“If there’s an earthquake, that bridge is going down,” Morrison said. “We couldn’t waste any more time … I haven’t heard any complaints because I think the public has been well advised on what is happening. People have accepted the project because they know it needs to be done.”

Although the new bridge is a safety measure, Skinner recognizes that the project will increase traffic congestion and has experienced complaints because of it. According to an October Bark survey, 28 percent of students self-reported that their commute to Redwood has been affected by the construction.

One such student is junior Matt Shippey, who commutes from Kentfield and crosses the bridge on his way to and from school every day. Shippey said he has seen a marked increase in congestion around the area.

“I think [the construction] has created a lot of traffic, especially around the afternoon at 3:30,” Shippey said. “Everyone from the Kentfield and Ross areas has to go [across the bridge] and anyone who’s not using the freeway is using that bridge to get over to the Larkspur side [of the creek].”

Skinner said he understands why some citizens are complaining, citing the rise in congestion as a primary factor.

“We’ve seen a whole lot of complaints about replacing the bridge,” Skinner said. “I think most of the negative feedback from the public has to do with the inconvenience during construction and the fact that there are traffic impacts over the course of the construction.”

In regards to some of the complaints, Skinner noted that the city ran a study about 10 years ago to determine whether it was more cost-effective to repair or replace the bridge, and that the results pointed to a full replacement as the best option.

In addition, both Skinner and Morrison cited the environment as having a noticeable impact on the speed of construction, as the creek is home to protected bird and fish species that will force crews to halt work during certain times of the year. Due to these conservation efforts, the project is going to take twice as long as it would have without these environmental concerns. The main impediment is the Clapper Rail, a protected bird species. According to Morrison, there is a nest of Clapper Rails near the bridge that will require the crews to be quieter than usual and force them to take breaks during construction.

Shippey said the four-year timeline seemed exaggerated given the major effects the work has already had on traffic, such as the tighter lanes restricting the flow of cars across the bridge. He also claimed that construction would be moving faster if the bridge was seen as more important or was located in a more populous community.

“I think four years is kind of ridiculous with how they’re keeping [the lanes] super tight,” Shippey said. “I think [the construction] could be quicker because if [the bridge] was a bigger [more important] bridge in a bigger area with more people, they’d be getting it done in less than four years.”

Though it may be a few years before the new bridge is fully operational, Morrison has a bright outlook for its impact on the community. Construction has been taking place at the nearby Marin General Hospital for over two years, and Morrison believes replacing one of the most important access points to the hospital is critical, especially in the case of a natural disaster.