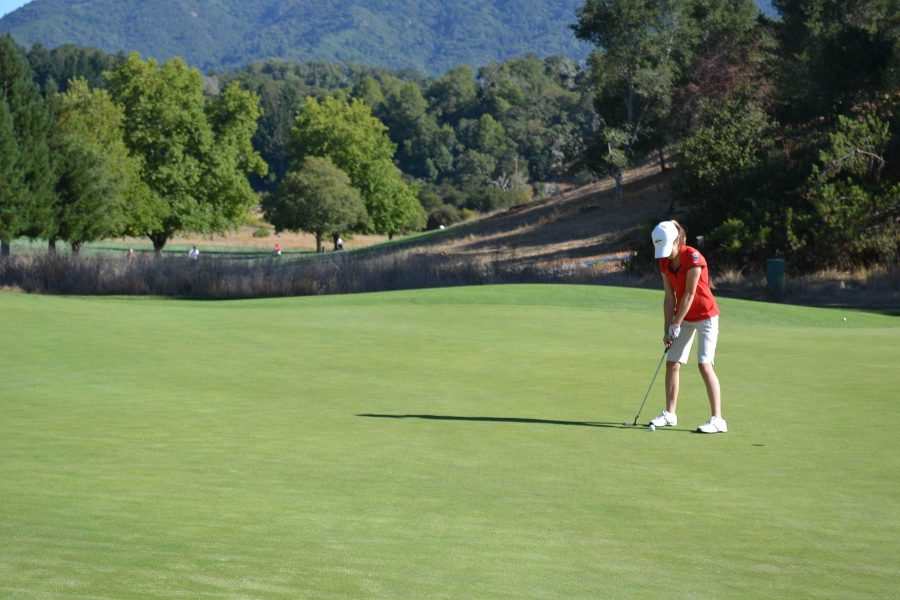 Olivia Poletti sinks a put on the first hole green during a match against drake on Tuesday, Sept. 4.

Although the varsity girls’ golf team is made up of nearly half newcomers to the sport, the team is quickly proving that it will be competitive in the MCAL season, due partly to the senior leadership of a player that one coach called the best in Redwood history.

Captain Lindsay Slocum, senior, is a three-time first team all-MCAL athlete, and according to Coach Mike Kelemen, the best female golfer Redwood has ever seen.

Slocum is more than just the team’s top scorer — she is a team leader, especially to those who are new to the program.

“She’s basically like another assistant coach,” Kelemen said. “She works well with all the other new people on our team.”

Redwood, with the leadership of Slocum and the four other returning players, increased its record to 2-1 with a 325-429 win over Drake on Sept. 4 at the Meadow Club.

Last week, Redwood lost their season opener to MCAL golf powerhouse Justin Siena. Two days later, they won a key match against San Marin, one of their league rivals, according to Kelemen.

Kelemen said that the team already has their goals for the year in place.

“Our goal, hopefully, is to finish in third place,” Kelemen said. “I think that’s a realistic goal. Probably the race for third is between us, San Marin, and MC, who are all probably pretty similar.”