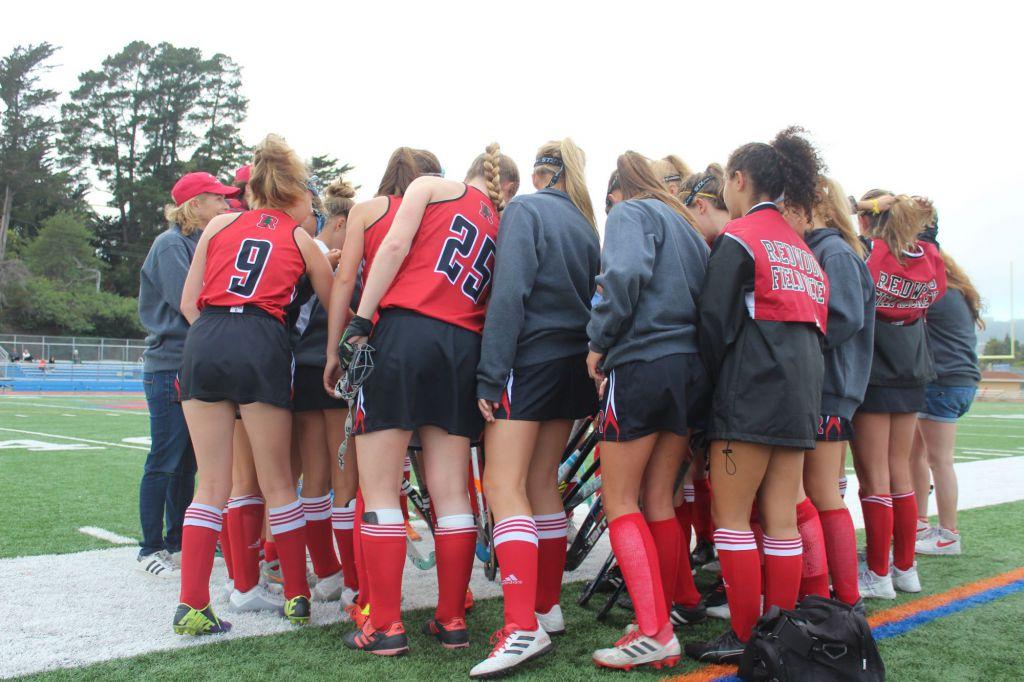 Huddling in before kickoff, Giants put their sticks in as they chant

On Tuesday, Oct. 9, the varsity field hockey team took their skills to the Tamalpais Hawks’ field. Despite the fog and cold weather, they brought home yet another victory, improving their overall league record to 6-2. Although Tam obtained possession of the puck at kickoff, it wasn’t long before the Giants interrupted Hawks offense, gained possession of the puck and scored.

Leading the team, senior Erin McCarthy kicked off the game by scoring two goals in the first five minutes. Throughout the first half, the Giants were able to keep possession of the puck on Tam’s side of the field while forward players sophomore Camille Ray, McCarthy and senior Nicole Notter fought to get the puck into the goal. Ray was able to get Redwood’s third goal in the first seven minutes of the game after battling it out against Tam’s goalie. Fortunately, Ray’s determination drove the puck into the back of the net.

“This is the first year  [Tamalpais] has gotten a field hockey team. Tam has come out tremendously strong for only having a team for one year, and has made the game competitive, which is great. They have a lot of very athletic girls on their team so we are hoping for a good challenge today,” Copp said.

Although Redwood easily beat Tam, key player junior Eva Oppenheim believes a part of the success is due to some of the coaches’ decisions.

“I think some of the success from the game was mostly because the coaches made the smart decision to give some of the younger girls and underclassman more experience and gameplay against Tam. Some of the upperclassmen got to try out some new positions like our defenders got to move up to the midfield and more forward so everybody got to try something new,” Oppenheim said.

Many players who have been a part of the field hockey team since the beginning, such as Notter, are extremely proud of how far the team has come in the past three years.

“We have improved so much since that first year, skillswise and athletically. Our team is very strong this year and I’m very proud of us. A lot of freshmen came in and had never touched a ball before, or had only done a few clinics, but they are all super athletic so they picked it up quickly,” Notter said.

According to Copp, a large contributing factor to the success of the varsity field hockey team this season is due to the hard work and self-motivation coming from members of the team.

“The skill of these girls has improved tremendously from the first year I coached to now. A part of that has to do with the initiative these girls have taken on their own to play field hockey in the offseason,” Copp said. “Whether it’s doing Futures (a national field hockey program in the spring) or summer camps, they come to tryouts ready with skills already developed as opposed to the very first year the team started and we were teaching them skills on day one of tryouts.”

In the game against Tam, many underclassmen were given the opportunity to present their skills on the field. Since seniors make up a large portion of the starting line up,  it was helpful for underclassmen who got the chance to adjust to the varsity level. Oppenheim believes that the seniors’ departure after this year will affect the team in a bittersweet way.

“I think as a whole junior class we are definitely excited, but we also know we need to step it up a lot, as a whole lot of our starting lineup are seniors. When they are gone, we are going to need to put in a lot of work in the off-season,” Oppenheim said.

As for the coaches, they will deeply miss the seniors and the positive impact they have had on the team in general.

“Our entire senior line will be missed tremendously. They are the backbone of the team,” Copp said.

Until then, the girls field hockey team has four games remaining this season, giving seniors a few more opportunities to make the most of their final season. Their next game is on Thursday, Oct. 11, at Drake.