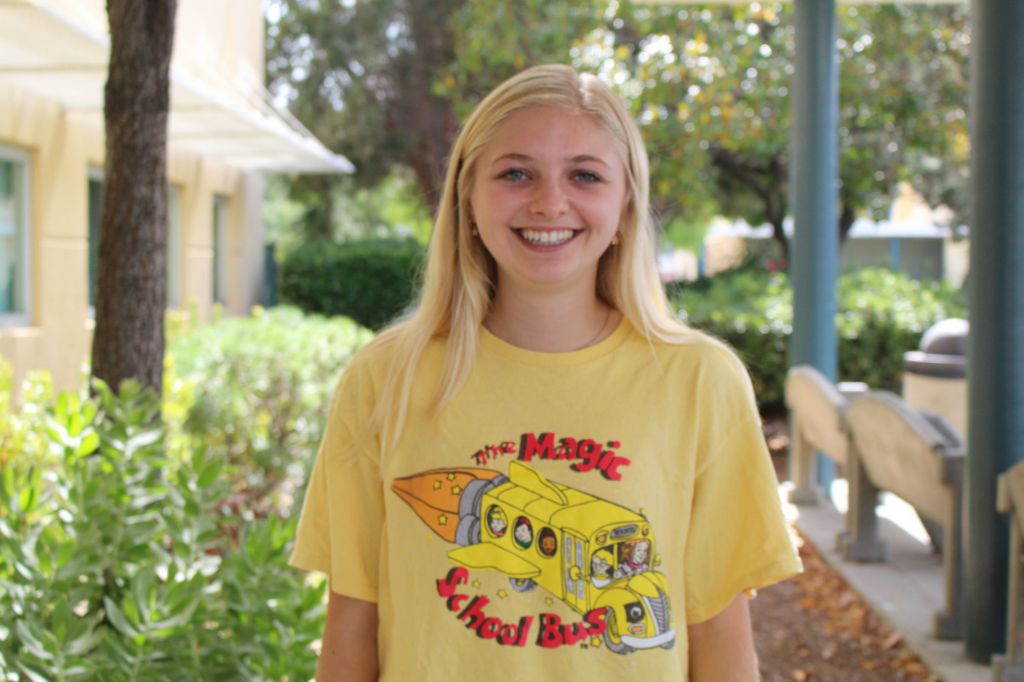 The 2018 Homecoming Court consists of 12 seniors with six boys and six girls. The court completed various activities throughout Homecoming Week, including assisting with decorating the senior stairwell, trivia and games on the mosaic stage and participating in the carnival at lunch. Voting for the court ends today at 4 p.m. and the results will be announced tomorrow at the Homecoming game which starts at 2 P.M.

Bennett is is a second-year Leadership student, third-year Link Crew leader and the Senior Class President. She ran track and field and played competitive soccer with Marin FC in middle school, but has decided to focus on soccer in high school. When she’s not busy with college applications or playing soccer, she enjoys spending time outdoors with her friends and family as well as going on walks with her dog. She is currently a member of the Friendship Club and the Special Olympics Club.

Quote: “I don’t like how people look down upon things like getting involved or having school spirit. Some people will get into it for Game Night and rallies but I wish that as a whole there was a little more participation. Maybe this year, as seniors, we’ll work on getting more spirit and participating,” Bennett said.

Felder has been on the Redwood baseball team for four years, starting on the freshman team and progressing to varsity junior year. Although he has played the sport since he was five, he says this will be his last year on a team as he has decided not to play in college. He is also the co-founder of the Jewish Food Club, which he started with his friends to embrace their shared religion and explore food within the culture. He became interested in hip-hop during his sophomore year and his favorite musical artist is Young Thug.

Quote: “We have a really strong homecoming court this year. With that being said, I think I’m the best option by far so make me your homecoming king,” Felder said.

Block is the ASB Vice President and has written for the Redwood Bark for two years. She has been on Leadership for four years, and enjoys planning and carrying out events that the class organizes. She has an older brother whom she looks up to, and in turn acts as a role model for her two younger sisters. Although she doesn’t play any sports, she enjoys supporting Redwood teams by going to sporting events. This year she is reinstating the Root, a sports magazine at Redwood, with senior Sam Warren. She says that cooking is not her strong suit but she loves food, which influenced her to co-start a food account on Instagram that now has over 18,000 followers.

Quote: “Last year I was on the Spirit Committee for Leadership, so I planned all of Homecoming. It’s pretty cool now to take the role as one of the court members and get in [the court’s] perspective,” Block said.

Hetrick is the ASB Treasurer and has been on Leadership for three years. He is a tutor in the English Language Development academic workshop class at Redwood. He has played varsity soccer and lacrosse since freshman year, and joined the Surfrider Club this year. His favorite artists are Khalid and Logic, and he especially enjoyed the recent Lil Wayne album. During eighth grade and freshman year, he was the lead singer in a band called Neighbor’s Nightmare and performed at the Boom Boom Room in San Francisco.

Quote: “I’ve made a core group of friends [at Redwood] that I will have forever. It’s a super cool community to be a part of,” Hetrick said.

Scharf has been on the varsity soccer team since her freshman year. She is the Spanish Editor for the Redwood Bark and one of the captains of the Redwood Debate Team. She co-founded the Mind, Body and Soul Club to help students find more effective ways to deal with stress. She participates in county government through the Marin Youth Commission and is planning on pursuing a politically-related career. Since she was little, she has listened to her parents’ favorite music, and has seen Bruce Springsteen in concert twice with her family. Her favorite activities are running and baking with her friends.

Quote: “It feels good to be nominated [for the court] because it means people think you’ve been a leader in the community and that you’ve done a lot during your time here, and it’s nice to know that people recognize the work that you do,” Scharf said.

Ganong is a part of the Redwood TV program as the weatherman. He doesn’t play a sport at Redwood, but outside of school he races in four to five triathlons per year. His favorite class last year was AP Environmental Science, and this year he is taking Sustainable Agriculture. He is interested in studying environmental science in college. He often volunteers at Slide Ranch once a week, works as a lifeguard and is an employee at Any Mountain. In his free time, he enjoys being outside, camping, backpacking and hiking. Ganong is also an avid traveler. He has been to Guatemala, Thailand, Cambodia and Peru, among other destinations. His favorite cuisine is Mexican food, which he says he would eat for all three meals every day if he could.

Quote: “[Being on the homecoming court] is a little embarrassing now but I think when I’m older it’ll be cool to tell my grandchildren,” Ganong said.

Mardell has been on Link Crew for three years and the cheer team for four years. She wants to major in psychology in college, which inspired her to become a part of the Peer Resource program so she could be a part of a support system for Redwood students. She is a part of the National Charity League and enjoys supporting the Special Olympics as a part of the league. Her favorite genre of music is rock, a preference that originates from her early exposure to bands like Queen, AC/DC and Guns N’ Roses.

Quote: “There’s such a fun group of kids [on the court] this year. I’m just really excited to goof around and have fun and hopefully represent the school in a good way,” Mardell said.

McClain moved to Marin from Maryland in fifth grade. He did rock climbing for a few years in middle school, then began playing lacrosse and continued participating through high school. He has been on the varsity lacrosse team since sophomore year and is a member of the Meat Society. In his free time, he skateboards and listens to hip-hop and rap music. One of his talents includes his ability to solve a Rubix cube in one minute and thirty seconds.

Quote: “I’ve been [at Redwood] for a couple years, and every year I meet new people and continue to make new friends. Hopefully this year we don’t have any more threats or fire alarms,” McClain said.

Milan is a four-year Leadership student and a photographer for the Log. She was on the field hockey team for three years and enjoys sailing when she has free time. She was in the Junior Olympics for track in middle school but discontinued the sport to pursue her interest in acting.. She enjoys listening to country music, an interest than comes from many visits to her family in North Carolina. She wants to live on a farm in North Carolina and raise chickens when she is retired. Her favorite food is chicken, specifically chicken pot pie and the “#1” menu option at Chick-fil-A. She has gotten three concussions, one of which occured when she was hit in the head with a water bottle.

Quote: “I think that being on the court is something that’s going to be exciting because I’ve seen past Leadership kids doing it in the years before me and it seems cool,” Milan said.

Squiers has played varsity basketball for three years and is one of the team captains this year. In addition, he has also played varsity lacrosse for two years, but says he makes basketball his priority. His favorite genre of music is R&B and jazz, and if he’s not listening to music, he’s playing music. He takes Advanced Performance Workshop, has released two albums and will release a third album this month. His maternal grandfather played the trumpet around the house when he was younger, which inspired his mother to play trumpet and sing in a jazz band. Both his mother’s and grandfather’s involvement in music led him to begin singing and playing music himself.

Quote: “If there wasn’t any music in this world I don’t think I would be able to live like I am today. It’s always been a very important part of my life and family,” Squiers said.

McCarthy is one of the hosts of Redwood TV. She started travel lacrosse on Tenacity in fifth grade, and has been on the varsity field hockey and lacrosse teams since her freshman year. She co-founded the Mind, Body and Soul Club sophomore year and founded the Girls Who Code Club junior year. She is interested in minoring in computer science and completed a seven-week internship with Girls Who Code at Sephora, where she learned how the tech industry interacts with the makeup industry. She is also a tech assistant for the Redwood Bark.

Quote: “I love how supportive the teachers are, I love how big our school is and how you’re always meeting someone new everyday,” McCarthy said.

Ash is one of the hosts of Redwood TV and is a copy editor for the Log. He says that he enjoys being a part of the Log because it has helped him meet new people and make connections. Outside of school he rows for the Marin Rowing Association, likes to listen to rap and goes on adventures with his friends. He has broken both of his arms and went to the hospital for breaking his left arm at the same time that his mother went to the hospital to give birth to his little brother. He thinks of himself as a friendly person.

Quote: “I’m an open book so if you want to be my friend, there’s a 95 percent chance you could be my friend if you just say ‘hi’ to me,” Ash said.