Behind the reviews of food critic Leanne Battelle 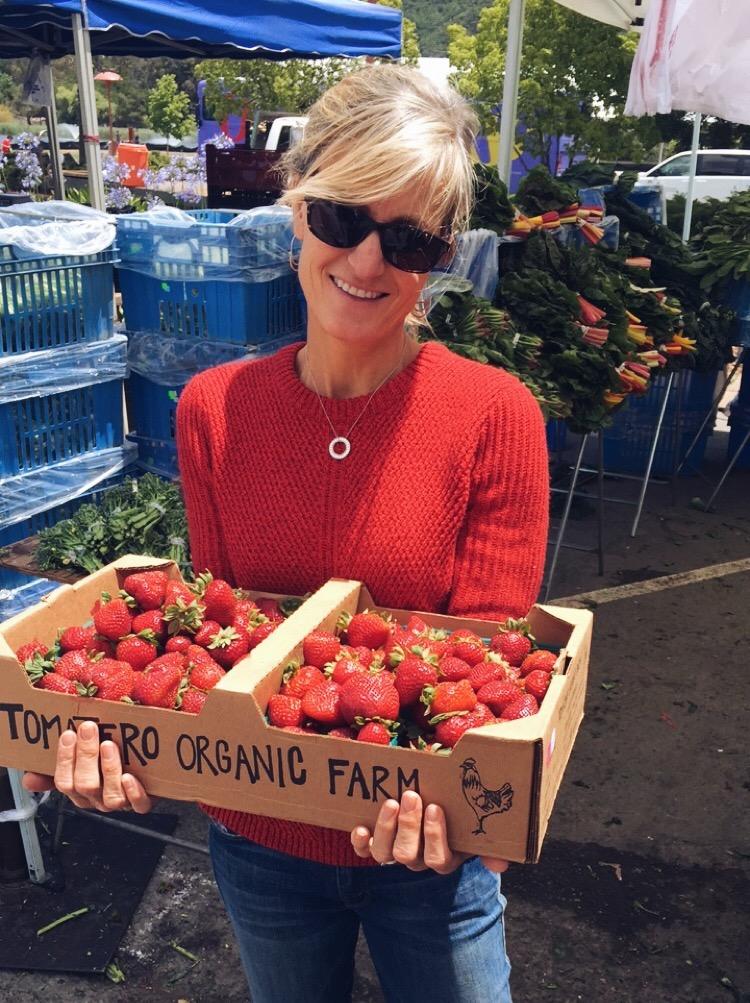 Leanne with some strawberries at the farmer's market

To many people, being a food critic sounds like a dream job. All you have to do is eat food and write about whether it was good or not: easy, right? On the contrary, Leanne Battelle, a Redwood parent and freelance writer who writes a restaurant review every week, which is then published in the Marin IJ, would say differently.

“To do a place justice, it takes a lot of time … To say, ‘Oh, I went there, the burger was juicy and the fries were crispy,’ it’s like, so what? My favorite part is finding what’s underneath it all,” Leanne said.

Leanne has been writing a weekly restaurant review for the IJ for two years as of this August. However, her career path did not start in food journalism. She worked as a director for healthcare conferences for eight years, but eventually realized that her real interest lies in the food industry.

To pursue her interest, Leanne enrolled in edible education courses at UC Berkeley, which educated her food knowledge. After taking those classes, she started a blog in 2012, “The Real Deal Marin,” and began her food writing career from there.

“I wanted to uncover the restaurants, eateries and people that were authentically providing food at a decent price that had real ingredients,” Leanne said.

Aside from writing about local places to eat out, she also aimed to show how simple it can be to make a good meal at home in her blog.

“People would say, ‘Oh wow, you cook every day, how do you do that?’ So I wrote easy recipes and things like that. Then, I started another small side business helping people organize their kitchens so it was easier to cook. One thing led to another and [the position for weekly IJ restaurant reviewer] opened up,” Battelle said.

After getting the job two years ago, she ended her blog. According to Leanne, this led to a much larger workload at home.

As described by senior Nick Battelle, Leanne’s son, she is always writing and editing which he attributes to her strong work ethic. Nick often accompanies Leanne when she goes to review a restaurant. He noted that to be less conspicuous at the places she’s reviewing, she tries to remain unknown.

“She tries to stay hidden because she’s done many of reviews now. We go as a secret family and order way more food than we need because she has to try a bunch of different things,” Nick said. “It’s a lot of work and she stresses out about it a lot of the time, but she loves her work; it’s what she wants to be doing.”

Kaitlyn Battelle, Leanne’s daughter and a Redwood alum, also commented on her passion for her job.

“She likes it because she gets to explore around Marin to places she wouldn’t normally go. I know she’s found restaurants that she would never have been to otherwise if she hadn’t had the job, and some of them are now her favorites. She also loves the aspect of connecting with business owners around Marin,” Kaitlyn said.

Although she will go with her family sometimes, Leanne said that her focus always has to be on the food itself.

“It’s hard to go with a friend I want to catch up with, and one time I went with my book club and I never did that again. I need a lot of material to write and if I’m distracted, it’s hard,” Leanne said.

Throughout her time as a reviewer, Leanne has found that a misconception about food in Marin is the number of quality restaurants that exist.

“‘There’s nowhere to eat in Marin,’ people will say, because the city is so close. Granted, that’s pretty big to compete with, but there are so many neat places that I might not have discovered otherwise,” Leanne said.

Leanne continues to uncover hidden gems in Marin every single week. To check out her articles, click here.