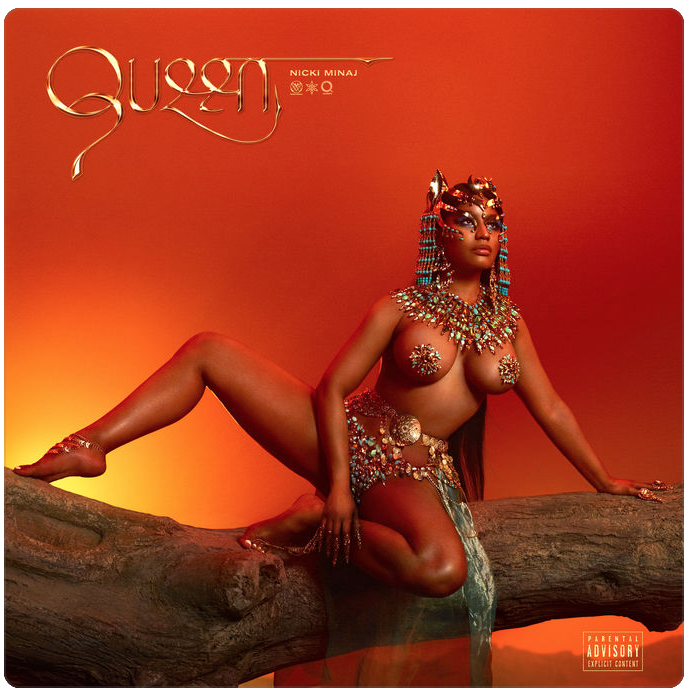 Click on the link below to see an infographic on my opinion of the top five songs in Nicki Minaj’s album “Queen.”  https://create.piktochart.com/output/32198766-nahas-sachi-nicki-minaj-album-review

With the release of Nicki Minaj’s newest album “Queen,” she attempted to reclaim her throne of top female rapper, which had been threatened as Minaj took a break from producing. “Queen” bombarded the top charts after its reveal on Aug. 17 with over 200,000 sales in one week. “Queen” is Minaj’s first album since she released “The Pinkprint” in 2014, and the long-awaited album features eight iconic artists including Eminem, Lil Wayne, Ariana Grande, and The Weeknd. Despite her effort to steal the crown, Minaj failed to produce a successful album that would define her as a five-star artist.

Announcing the album nearly half a year in advance, Minaj was quick to grab the attention of her fanbase, “The Barbz.” The pre-released songs “Chun-Li” and “Rich Sex” immediately hit top charts with the pre-order and not only left her fans begging for more, but created an impression that the rest of her album would surpass expectations. As a passionate fan of Minaj’s music, I was on edge waiting for her album to be released and held my expectations high due to the fact that she has not released an album in four years. Unfortunately, Minaj missed her long-awaited opportunity to produce another album as successful as her last.

Through the use of her aggressive, vulgar language and stimulating lyrics, Minaj makes it clear that this album is all about her, and despite all of the negative headlines about her on social media, she is always going to be number one. Minaj’s rapping is identifiable by its distinct fast flow, accents and rhyming slang, but she switches up her familiar sound as she begins her album with the song “Ganja Burns.” With this song, Minaj opens her album with a unique track that has more of a steady beat and emotional tone, captivating her listeners and highlighting Minaj’s softer side.

Ultimately, the first half of “Queen” was well worth downloading or purchasing for $11.99 as it was made up of a variation of mellow-toned and faster-paced songs, and contained the biggest hit songs from “Queen:” “Chun-li,” “Rich Sex,” “Barbie Dreams” and “Bed.” As the album progresses to its second half, it was harder to enjoy the entirety of every song because they all sounded similar, particularly in how bland they were. For instance, “Run and Hide” and “Come See About Me” are two songs that contained no excitement or content that were compelling enough to capture my attention or further show off Minaj’s typically exceptional rapping talents.

Despite the tantalizingly-fresh first track, “Ganja Burns,” “Queen” doesn’t take many risks, and as a result, all the songs sound similar and don’t have a personal impact on the audience. Additionally, money, sex, designer brands and being the Queen are the most repetitive (and unflattering) topics Minaj brings up, not only making it harder for her audience to relate to her content but become harder to listen to as they are spoken about in almost every song.

Furthermore, I was more impressed by the songs featuring other famous artists such as “Chun Swae” feat. Swae Lee and “Majesty” Feat. Eminem and Labrinth because they contained more depth and rhythm and did not sound similar to other songs produced by Minaj. However, the best song on the album is “Barbie Dreams,” a four-and-a-half-minute song with a steady drumbeat and catchy rhythm. “Barbie Dreams” is a clever and hilarious twist on The Notorious B.I.G’s “Just Playing (Dreams),” where Minaj references 31 rappers in an effort to call each and every one of them out as her potential conquests. This song contributes greatly to Minaj’s album as it reveals her talent in taking an old song and making it relevant today.

Unfortunately, this album only contains a small number of songs that are worth adding to a playlist. Aside from the pre-released favorites, “Rich Sex” and “Chun-Li,” the Barbz (I included) are not too impressed with Minaj’s big reveal. A majority of the album is quite dry and the lyrics focus too much on Minaj’s inappropriate desires, causing the album to blend in with the rest of the rap industry. Only a meager 50 percent of Queen was able to show off Minaj’s capability to produce a combination of heartfelt and aggressive songs. From now on, Minaj should keep working on her singles because “Queen” was not ready to take the throne.