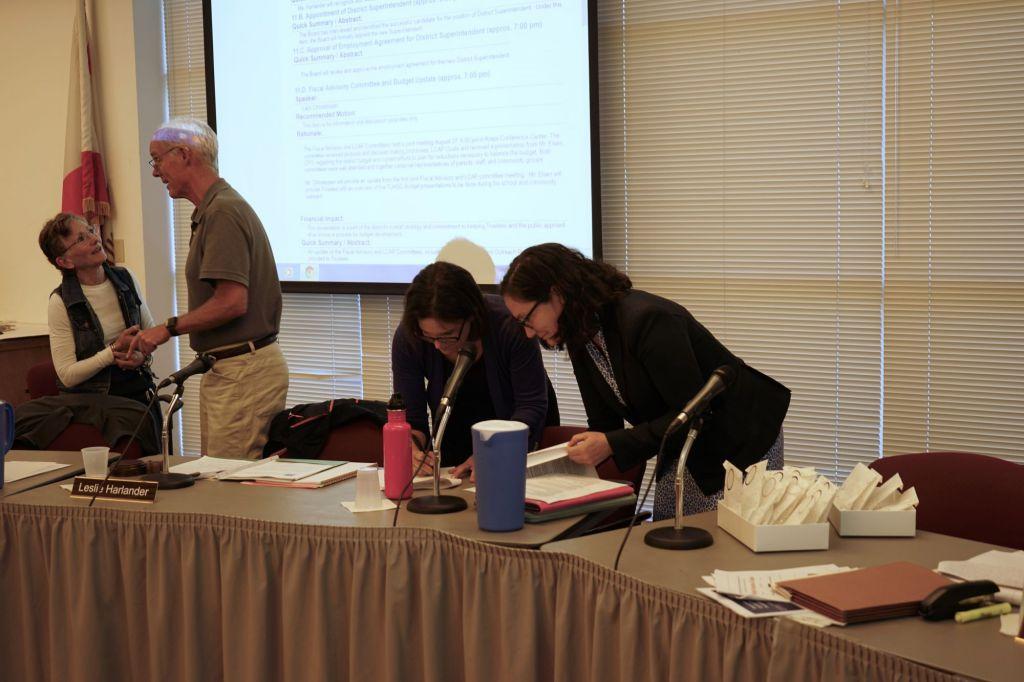 Effective on June 30, Dr. David Yoshihara resigned from his position as superintendent. The Tamalpais Union High School District (TUHSD) was informed as a whole by a two-paragraph email which stated the fact of his departure, without reason. For the remainder of the summer, Valerie Pitts and Walt Buster were appointed as co-interim-superintendents, serving as a temporary solution to Yoshihara’s resignation. On Aug. 28, however, the position of Superintendent was officially filled by Dr. Tara Taupier, the previous assistant superintendent in Educational Services of the TUHSD. The board attributes her nomination to her extensive experience within the district and her enthusiasm for maintaining a healthy academic community.

As Assistant Superintendent in Educational Services, Taupier was considered to be the Chief Academic Officer, where she handled tasks such as tracking test scores, observing grading, student performance and quality of teaching to ensure students had ample opportunities for achievement. The President of the Tam District board, Leslie Lundgren Harlander, can vouch for Taupier’s dedication to the field.

“[Academics] are what we value in the district: making sure the students have the best curriculum possible and that teachers are offered the support they need. [Taupier] really devoted herself to that area,” Lundgren Harlander said. “She worked a lot on equity; she opened up our eyes to the issues of students having an equal opportunity to access programs.”

Walt Buster, one of the former co-interim-superintendents, explained the different tasks that are asked of a superintendent.

“The superintendent reports directly to the board. [Their] job is maintaining the overall health of the district. Teachers that get hired, budgets that get balanced, curriculum that gets written, [they] delegate that to people. The district holds [superintendents] accountable for making sure things go well.”

Having served in administration for the majority of her 16 years working in the district, Taupier is more than familiar with the duties asked of the superintendent, according to Lundgren Harlander. Through her time working in the TUHSD, Taupier has also formed a broad range of relationships across the district, which she finds invaluable. She believes that involving students, parents and others from the community in the decisions of the district is crucial.

“I’m an advocate for going through a decision-making process with your entire community. I think you have to go out, be open and gather ideas because there are people who have ideas you would never think of,” Taupier said. “Sometimes it’s helpful to put every crazy solution on the table, [and] don’t say ‘No, that’s absolutely wild.’ Put it out there, because from that crazy solution, something might distill and you might find that the whole thing’s crazy, but if you adjust a little piece of it, maybe that works.”

According to Taupier, this outlook will be applied to the district-wide deficit. The district has been trying to keep cuts as far away from the students as possible, but financial adjustments must be made as the deficit has risen from $6 million to $8 million since March.

“We’re going to have to see what the community says [about cuts], and from there, we might make the recommendations based on the input we get.… Sometimes you think you know what the community values and then they come back and you’re like ‘Oh, I didn’t see this,’” Taupier said.

A Google Form is on track to be sent out to both parents and students within the district, where suggestions can be made about the TUHSD budget. Taupier and the rest of the administration encourage district members to consider suggesting not just potential cuts, but also recommend tactics to raise and/or adjust revenue, or to alter expenditures.

“We are in a place where [the deficit] has to go down, or else we become insolvent. That’s just not an option for us. Let’s get the community around this problem solving and have a conversation about who we want to be as a Tam District, and how collectively can we get there, acknowledging that we might have to do a little more with less than we’ve been used to in the past,” Taupier said. “It is a loss, but there’s also the way to look at it where we still have more than other districts. We’re still really fortunate. We’re lucky to have the community that we do and the fact that we are as well funded as we are. It’s an adjustment.”

Even with the financially uncertain future that lies ahead for the TUHSD, Lundgren Harlander believes Taupier will be able to handle it as she has consistently shown that she’s more than capable of dealing with difficult issues.

“If you think of the big picture of what the superintendent does, they’re the CEOs of the district. She’s basically the person in charge of everything. To do that, you need to be a very strong manager, leader, always open to learning, looking ahead, inspiring people and looking at the mission of the district and making sure we’re moving in that direction,” Lundgren Harlander said. “She’s demonstrated that she has all those qualities. She loves the district. She’s been here a long time—there’s no surprises for her. Her heart’s here.”