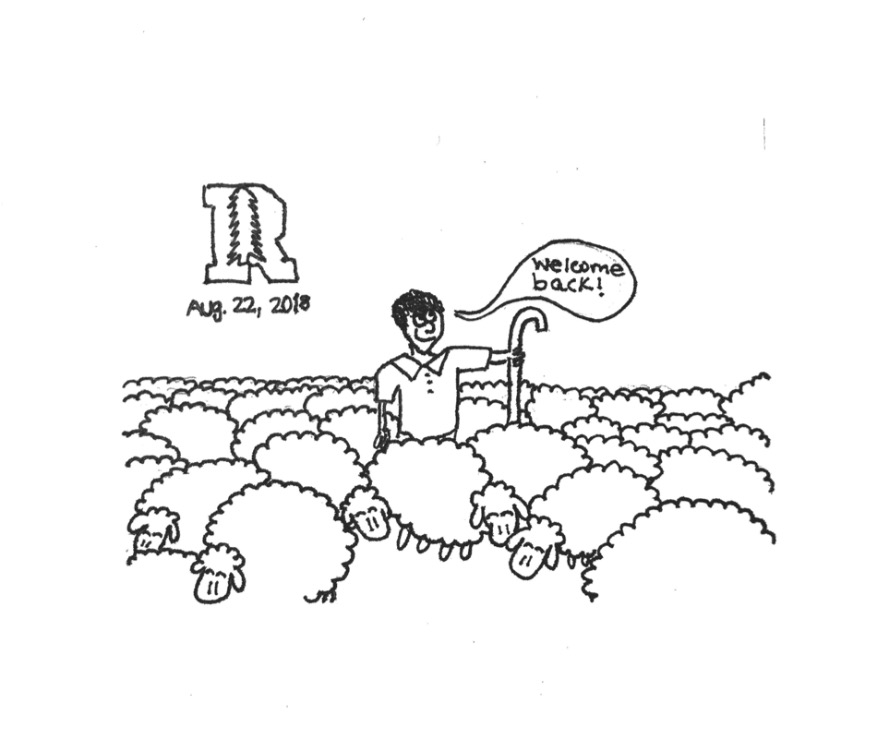 Nearly 2,000 students feel bittersweet as they come back to school, leaving their stress-free summer and all of its adventures behind. The excitement of starting the next grade, getting a new schedule and seeing classmates after months apart lifts spirits enough to carry students to the parking lots of Redwood for the first day of school. For the second year in a row, Redwood started off the year with the “Giant Kickoff.” This year’s first day was significantly different due to the loss of the advisory class. Although it was a relief to not have a heavy workload on the first day of school, the school-planned activities did not quite achieve the intended effect or show off the school’s strength through spirit or energy.

For freshmen and juniors, the morning started off in the gym with guest speaker Shaun Derik. Although his overall message to ‘Not Give Up’ was slightly unclear, students were engaged and participating through the entirety of the speech. In my opinion, the best part of the speech was the dance-off between four students at the end.

During this time, the sophomores and seniors were spread out around the campus participating in class bonding activities. After about an hour, the grade levels switched.

“I liked his overall message and how he was positive with his [message] because a lot of speakers can just be like ‘oh, let me state the facts’, but he was relatable,” Robison said.

Based on students I interacted with, the overall consensus was that he was one of the most relatable speakers Redwood has had in recent years. This was the highlight of the day by far.

During this time the juniors and freshmen participated in an individual class bonding activity that tried to get students to mingle with people that they would not normally talk to. The students started the activities as one large class and then divided into smaller groups. The questions initially posed safe topics like  favorite foods and holidays, but quickly transformed into sharing religious beliefs and ethnic background. Generally speaking, these are not typical conversation topics for the first day of school. This activity was already getting uncomfortable, but then the teachers transitioned students into even smaller numbered groups to share stories of times in which they felt like they didn’t belong.

Although in theory these activities sound like an interesting way to get students to connect with new people from their class, this was not the case. People still found ways to avoid the questions in order to just be with their friends. I even saw a few kids who realized they did not have any close friends in their assigned group run back to join the other group where their friends were. When the teachers asked the students to find someone with the same number of siblings as they did, I immediately thought of my two best friends and walked right over to them. This totally defeated the purpose of the activity.

The middle of the day ran relatively smoothly with ten-minute classes, seven-minute passing periods and an hour long lunch. It was nice to get a chance to see who was in your class and to get a feel for your new classes and teachers. In my opinion, this was the section of the day the students felt to be the most useful and of value.

The end of the day is where it all went south. Students were under the impression that there would be a rally. Rallies at Redwood are usually spirited and get lots of people involved, providing a fun activity for a group of 2,000 people. Unfortunately, this “rally” turned out to be a school gathering, not the typical lively Redwood rally.

After walking into the gym at the beginning of the “rally,” you still might have believed you were entering a rally because there was loud music and people hustling to sit in their grade’s section of the gym. I still remember this walk as a freshman, staring at the massive walls of bleachers crammed full of students. Shortly after the teachers took over the microphone, they had students come sit on the floor. What was lacking was the usual charismatic activities and energy our previous rallies are famous for. I felt bad for the freshmen because I knew this would be their first impression of Redwood and its “fun rallies.” There should have been some sort of upbeat competition or performance to get students fired up for the upcoming school year.

Some students opted out of the morning activities, some skipped the end of the day rally, and some avoided both, only showing up  for their classes in the middle of the day. The way the day’s activities were scheduled perfectly enabled anyone who wanted to sleep in or leave early on their first day back from summer vacation.

Junior Vanessa Comins explained why she skipped the school-planned activities. “Last year we had a rally on the first day of school and I didn’t really enjoy it. I didn’t feel the need to go and show up. I only really needed to show up for my first period class and the rest of my day,” Comins said, adding that she successfully predicted there would be nothing to miss out on.

When teachers asked the next day what students thought of the first day’s activities, the overwhelming consensus in my classes was that they would have rather just had a regular day of school. I found this disappointing because I think the “Giant Kickoff” is a great idea with a lot of potential. With better planned activities Redwood could start off strong and set the tone for the rest of the year..

For future years, teachers and students in charge of planning the first day of school activities should understand that after a summer apart, the student body’s spirit and togetherness is already strong. The long, deep conversations are unnecessary. We appreciated the effort and the relaxed aspects of the day, but missed the upbeat and competitive spirit that Redwood knows how to drum up in our gym.Next year, let’s adjust the first day of school to kick off our year on the right foot.