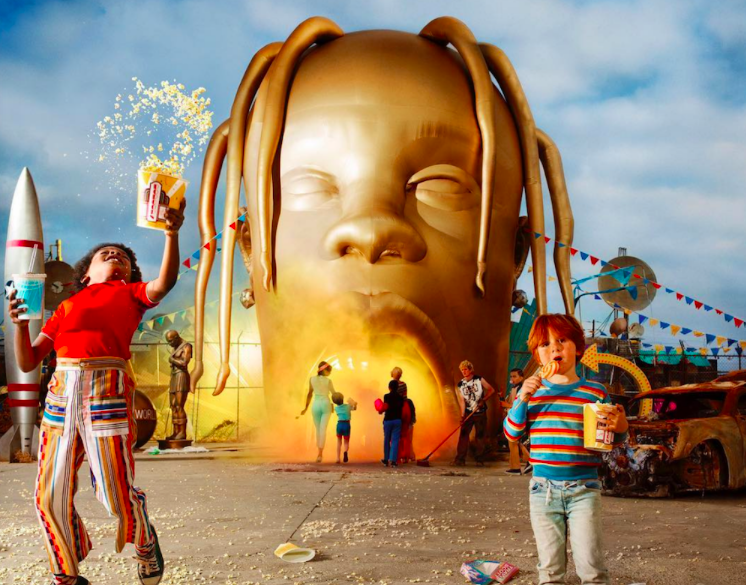 The Astroworld album cover was created by the famed photographer, David LaChapelle, who has struck up a new creative relationship with Travis Scott.

Travis Scott released his third studio album to date, “Astroworld”. It has since reached the top of the Billboard 200—maintaining a number one spot for a consecutive three weeks. The album has propelled Scott into the spotlight, making him one of the summer’s top artists to watch. “Astroworld” is Travis Scott’s best album thanks to its stellar production quality and unique basslines.

Named after a discontinued amusement park in his hometown, the album pays homage to Houston, Texas. Various samples and recording styles make the album distinct in its effort to recreate the Houston rap scene. For example, the track “RIP Screw” is a tribute to one of Houston’s musical innovators, DJ Screw, and cameos by Three Six Mafia, Big Truck and 2 Live Crews add to the track’s dark, yet melodic sound.

The album’s sound production is undoubtedly one of its finest qualities, tying together the vocals of several artists, widely different samples, and mainstream Atlanta beats. In “Stargazing,” a simple melody is blended against an astringent bassline making for a catchy sound and psychedelic feel. The track also includes one of the album’s signature traits: a rapid change in pace

to offset the listener. This beat change is what makes “Sicko Mode” such a hit on the charts; it surprises the listener, yet, the beat is too good to turn off.

While the album succeeds in sound quality and artistic elements, Scott’s lyrics are, for the most part, distasteful and mainstream. His references to drugs and money dilute the beauty of the album by bringing it back into cookie-cutter rap culture. The majority of the album’s tracks lack a sense of maturity on Scott’s part.

Despite lackluster lyrics, the collaborative aspects of the album are perhaps what make it so fully-realized. Stevie Wonder’s feature on “Stop Trying to Be God” is transcendent, revealing Scott’s willingness to try a new sound. The beats in the track switch

between dreamy and the classic Atlanta-trap style, giving way to a track that mimics those of Post Malone’s on “Beerbongs and Bentleys”. Appearances from Drake, Frank Ocean, Swae Lee and Gunna add to the album’s mainstream quality.

Throughout the album, Kanye West’s influence is evident with tracks such as “Coffee Bean” and “Skeletons.” Both are riddled with moments of lyrical impulse, a signature in Kanye’s album, “The Life of Pablo.” “Coffee Bean” mimics the slow melody of Kanye West’s “30 Hours” as it closes the album with eerie, almost ghost-like sound production. As a closing track, Scott reflects on his relationship with Kylie Jenner in a surprising moment of vulnerability, claiming: “Your family told you I’m a bad move/Plus, I’m already a black dude.”

“Astroworld” is a beautifully cut-and-paste masterpiece of sound that fulfills listeners looking for a refreshing yet familiar album. It is Travis Scott’s most creative album to date—a long ways away from the days of his first breakout hit “Antidote.”