The Crazy, the Rich, and the Asian: What “Crazy Rich Asians” means for Hollywood 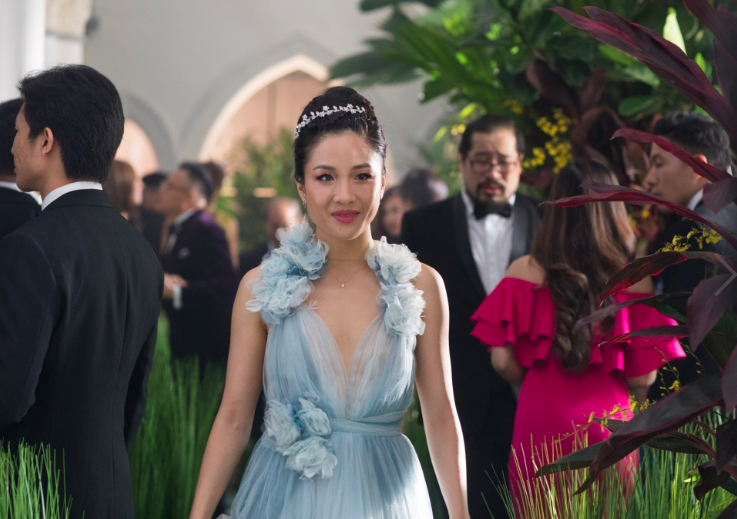 Rachel Chu, played by Constance Wu, makes a head-turning appearance at the wedding

As a seemingly endless stream of romantic-comedy movies with identical plots and similar characters have dominated the theaters for decades, “Crazy Rich Asians” delivers a much needed, unique rom-com hit with an entirely Asian cast, the first Hollywood movie to do so in 25 years. With continuous controversy surrounding representation of minority actors in Hollywood, many recent movies—including Black Panther—have been very popular, resulting in huge profits in the box office. “Crazy Rich Asians” is no different, breaking multiple box office records and reducing Asian stereotypes in the process.

Adapted from the book by Kevin Kwan, the film follows Rachel Chu (Constance Wu) and her boyfriend Nick Young (Henry Golding) as they travel to Singapore for Young’s best friend’s wedding. Although originally excited to visit Young’s family, Chu finds herself anxious to meet them when Young is revealed to be an heir to one of the largest fortunes in Asia. Chu grew up as a first-generation American with a single mother, drawing a stark contrast between Young’s family history and her own.

Since Chu is the low-class American girlfriend of Young, she is immediately isolated from his family and friends and becomes the victim of many immature taunts. The audience sympathizes with Chu, but feels the connection between her and Young is too strong to die at the hands of his family, specifically his mother. “Crazy Rich Asians” includes elaborate scenes including bachelor parties and cultural teachings like Nick’s grandmother’s demonstration of how to properly make a dumpling. Additionally, the subtle but effective hints of comedy—and comedian Ken Jeong’s appearance as Goh Wye Mun—make it difficult to snooze off or feel the need to check the time during the movie. Although the ending is somewhat predictable, like any romantic comedy, it is set up in a unique and interesting way that settles every dispute the movie covers and leaves viewers feeling warm-hearted and reminiscent. In the end, the story proves that family—no matter the literal definition—comes above everything else.

According to Forbes, “Crazy Rich Asians” has remained at the top spot in the box office and has already grossed nearly $117 million over its first three weekends. This data should not be surprising for a movie trying to combat Hollywood representation, but it is shocking for a romantic comedy movie as these movies rarely make it to the top spot for their opening weekend, let alone three in a row. For an original and creative movie, it rightfully deserves the success and acclaim it has received.

“Crazy Rich Asians” also serves as an example of the growing media representation of minorities with its entirely Asian cast. Typically in American culture, Asian-Americans play the victims, outcasts or nerds. Just look at quiet and wide-eyed Lily in “Pitch Perfect” or short Long Duk Dong in “Sixteen Candles,” who constantly speaks broken English and doesn’t know how to use a fork. In “Crazy Rich Asians,” however, there is a span of characters from playboys to fashion designers, giving the media a new outlook by diminishing hurtful stereotypes. The women are headstrong and independent and the men are confident and versatile.

“Crazy Rich Asians” also happens to be the first Hollywood film in over two decades to feature an all-Asian cast, as the last was “The Joy Luck Club” in 1993. Additionally, for a romantic comedy to be this popular in today’s box office, writers have to be creative with the screenplay. Peter Chiarelli and Adele Lim, the main writers, do an extremely successful job at this, broadening the typical on-screen love story to a cultural adventure.

The diversity and modern take on the traditional rom-com make “Crazy Rich Asians” refreshing and a must-see for anyone that enjoys movies that will pull at your heartstrings and give you a good laugh.