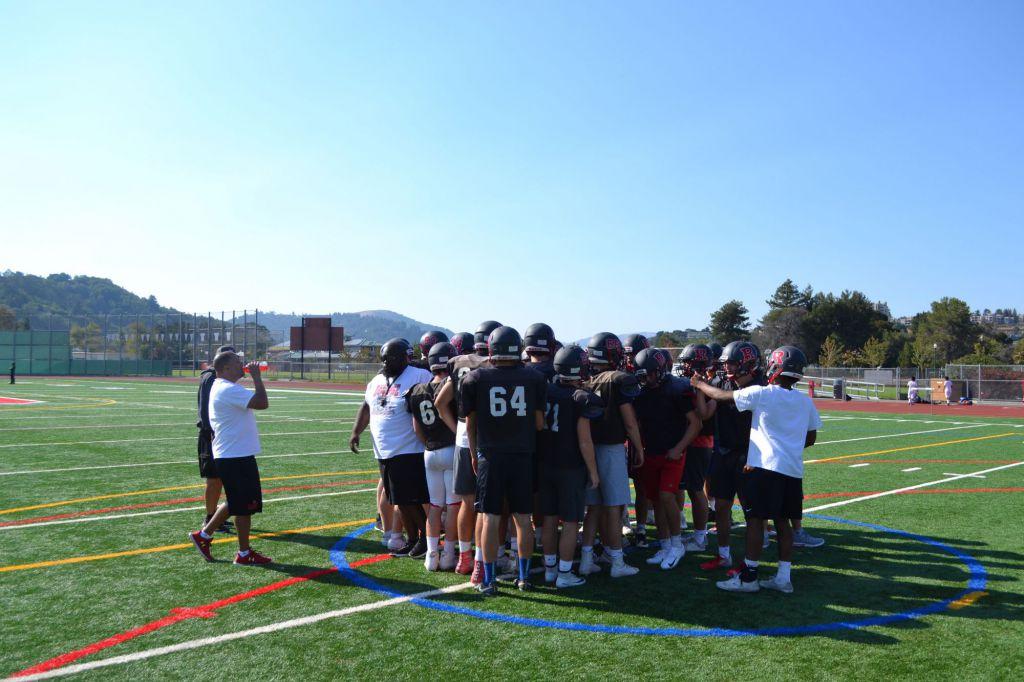 The Redwood varsity football team has embarked on yet another fall campaign as they set their sights on their first MCAL championship since 1998. Starting off the season strong, the Giants look impressive on both sides of the ball. With the combination of a number of seniors who have stepped up as leaders and a very capable junior class, Redwood seems poised to outperform past teams and make a solid playoff run.

Starting running back and cornerback senior Alex Aguero has been a large part of the team’s early success. Rushing for over 500 yards in the first two games, Aguero seems to be following in the footsteps of Redwood alum and football star Nick Calzaretta who had an unforgettable season in 2016, rushing for over 2,700 yards. Even though Aguero isn’t necessarily focused on breaking records, Head Coach Allen Talley is a firm believer that he could. Talley notes that Aguero was on the team with Calzaretta while he had his spectacular season and believes Aguero learned from it.

“I think he saw the work ethic that [Calzaretta] had. He’s gotten bigger, he’s gotten stronger and he’s really turned into a leader so it’s a lot of similarities for those two,”  Talley said.

With Marin Catholic opting out of MCAL this year and stacking their non-league schedule, Talley says that his team isn’t focused on the fact that the race for an MCAL banner is now wide open.

“We don’t think about that. We don’t care who it is. If we are playing the best team in the world or the worst, it’s still a game, it’s still a team and they still [have] to strap up and play,” Talley said.

According to Talley and Aguero, there is a lot of young talent and leadership on this year’s team. One of those talented players is junior slot receiver and cornerback Luke McKernan. Filling up over half of the team’s roster, the juniors have brought a winning spirit this year. Mckernan and many of his junior teammates came from a star-studded freshman and sophomore team that won a MCAL championship last season.

“Bringing that winning attitude, that we want to win and that we will win, not only helps me but the entire team,” McKernan said.

Talley and all of his players firmly believe that this team has a lot of potential to win not only MCAL, but to make a run deep into NCS playoffs.

“The ceiling is how high we take it. We always want to be the best we can and go the furthest we can and have high expectations, but we have to work hard behind that. If we do that, I think we can go pretty far this year,” Talley said.

Redwood squares off against Tam to kick off MCAL contention in Mill Valley on Sept. 15.