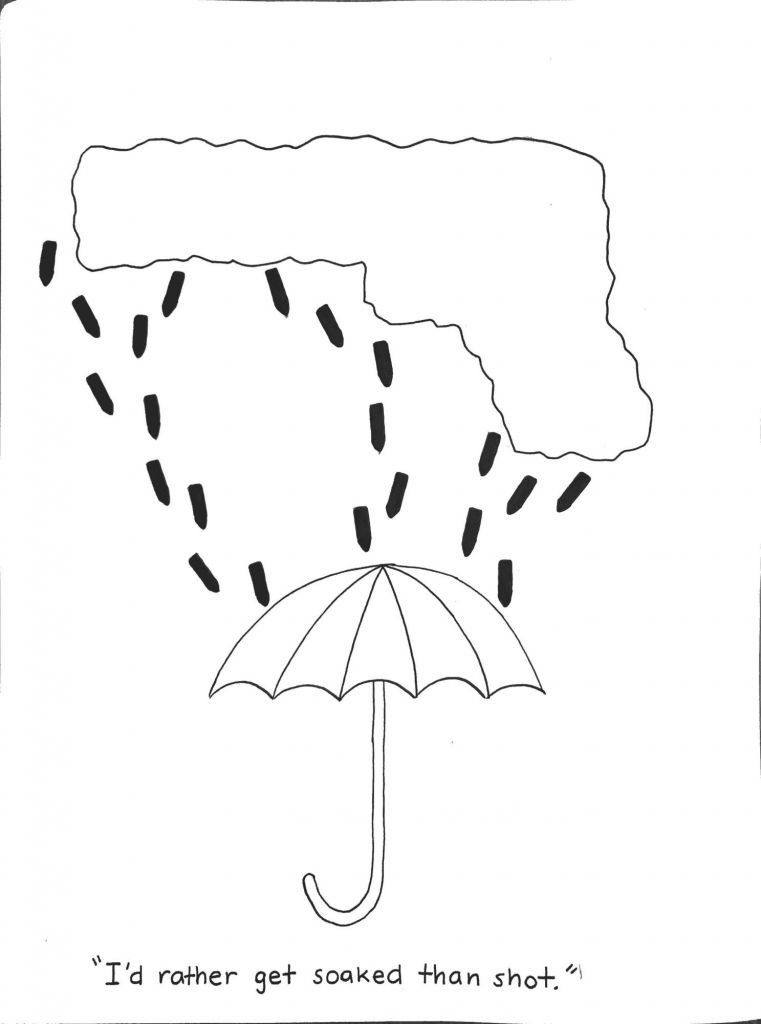 Two days ago, the nation united. At approximately 10 a.m. on Wednesday, students across the country chose to walk out of their classrooms in support of the Florida shooting victims and increased school safety measures. Amid morning showers, many Redwood students joined the walkout. Many who left class knew that an unexcused absence could go on their attendance records, however, to them, the movement outweighed the consequence.

The thousands of students who have walked out of their high schools are making history. According to the Women’s March website, where this walkout, named #Enough, originated, 2,853 walkouts were scheduled for Wednesday. However, despite the impassioned levels of activism around the country directly after the Parkland shooting and leading up to this walkout, the Redwood community has remained—for the most part—silent. The discussion surrounding school safety has been minimally addressed on a local level. There have been no assemblies, no discussions, no action, but instead an email has been sent to the entire Redwood community clearly stating the ramifications for those choosing to protest. The email stated that students would receive an unexcused absence if they decided to miss class for 17 minutes to honor the 17 lives lost during the Parkland shooting. While it is true that schools cannot mandate walkouts or protests under the California Education Code, students should not feel obligated to seek permission to stand up for their beliefs.

According to a recent Bark survey, 45 percent of Redwood students self-reported feeling less safe at school given recent events. It is the responsibility of our student body to change this and make a statement, no matter what consequences administration gives regarding our attendance records. The walkout is one step in the right direction toward a community where prominent student voices are acknowledged and encouraged.

The students from Marjory Stoneman Douglas High School, the grounds of the latest school shooting, sparked a national youth-led movement that has spread throughout schools. These students are broadcasting the message that as young adults in America, it is essential to voice our opinions on platforms both large and small to demand change in our legislation. As members of an affluent community similar to Parkland, Florida, we have the duty to use our platform to speak out against these issues. These students have effectively utilized their socioeconomic advantages and unfortunate place in the spotlight to break the decade-long impasse on the gun-control debate centered around school safety.

Despite this, as teenagers across the United States demand to be heard, most Redwood students continue to sulk in the shadows of the politically active few who are open to expressing their beliefs on a county-wide scale. This may be because we care more about an unexcused absence, creating an atmosphere of apathy among the student body.

Some students in our own district did not hesitate to take action the day following the Parkland shooting. Tamalpais High School students organized a candlelit vigil with speakers, local news station publicity and even a statement from Congressman Jared Huffman to accompany the event. The organizing of this event required teachers taking time out of class to plan, action that has not been present in our classrooms. The vigil demonstrated real community activism—activism that Redwood has clearly lacked.

We cannot seek permission from administration or parents and let the fear of academic consequences extinguish advocating for our beliefs, especially when the issue is so closely connected to our lives. This is not the first time Redwood’s administration has struggled to define the boundaries of student expression. For example, in 1971, a Redwood student was suspended after wearing a “F**k the Draft” pin to protest the Vietnam War. Nationwide, public schools faced similar dilemmas; in December of 1965, Mary Beth Tinker was suspended for wearing a black armband to her public school to protest the Vietnam War. After appealing this decision, her case eventually became the well-known Tinker v. Des Moines, in which the Supreme Court ruled that we as students do not have to leave our freedom of speech and expression outside of school. Nevertheless, over 50 years after this case, students are still taking cues from school officials on how and when they should behave when they feel strongly about an issue.

History has shown us time and again that student activism can yield results, so why do we still feel the need to obtain permission for our activism?

Let us leave our mark on the very history textbooks that have built the foundation of our education. Walking out of our classrooms for 17 minutes is only a start. Wednesday isn’t an isolated action, it is the beginning of a movement, one led by us. We must not fear an absence more than a bullet. The choice is ours.