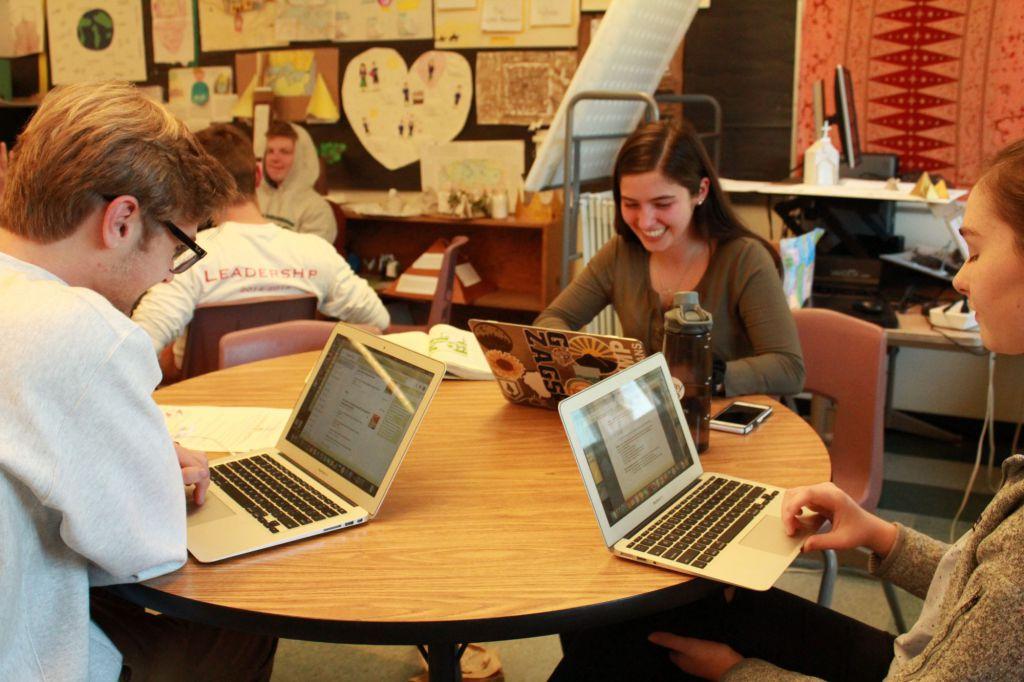 A panel of teachers and a few parents sit in classroom, eagerly awaiting student presentations on collegiate-level topics. A year’s worth of extensive, unique research has come to cumulation in this 20-minute presentation. Palms sweat and nerves surge as the video camera switches on to film the student speak. Yet, amidst the nerves, the anxiety quickly dissipates as the student begins to speak on a topic they are nearly an expert on thanks to Advanced Placement (AP) Research.

There are a number of AP classes offered here at Redwood. They appeal to different students for different reasons, whether it be the rigor of the course, the grade bump or some other benefit leading students to sign up. But unlike any other AP class, AP Research, the second class in the AP Capstone program following AP Seminar, is an unparalleled

opportunity that gives students the ability to pursue their interests while conducting college and graduate level research. Students spend the whole year working on a project of their choice, on any topic of their choice. Through detailed investigation, each individual works to uncover the answer to a research question that they came up with at the beginning of the year.

Unlike other AP classes, AP Research students control their subject matter at their own discretion without teacher influence. These research projects, composed of a 4,000-5,000 word research paper and a 20-minute oral presentation, are sent to the College Board for the final assessment, as opposed to taking an exam at the end of the year.

Senior Anna van Dorsten created a research project that connected to her own situation as a middle child. She looked into whether or not “middle child syndrome,” which refers to the idea that middle children are less successful academically because they have been given less attention by their parents, is in fact real.

“I decided to create a project to see if sibling position, like older or younger, affects academic achievement and grades,” van Dorsten said. “That was already done in two-parent families, so I looked at it in divorced-parent families.”

Once van Dorsten began conducting her experiment, the focus of her research shifted from middle-child syndrome to broader theories of family dynamics. She found that divorce changes the normal family dynamics of which children are highest achieving academically as a result of strain on parental resources.

Van Dorsten’s classmate, senior Max von Franqué, took his independent research in an entirely different direction, inspired by his love for the environment.

“This past summer I had a job at Marin Sanitary Service, which is the waste hauler here, and my job was a lot of route analytics and data analyzation to see if people were doing things like contaminating their recycling, and help route the trucks more efficiently,” von Franqué said.

The goal of von Franqué’s project would ultimately be to build a tool that would allow future researchers to measure how well people are recycling, composting and throwing trash in the landfill.

Due to time constraints, von Franqué was only able to conduct the analysis for the necessary variables needed to build the tool itself. The fact that he did not have time to create the tool demonstrates how much preliminary research the students conduct to become experts on their topics.

According to AP Research student senior Natalie Veto, students in the class must be more reliant on one another for help, as opposed to seeking out guidance from their teachers.

“The teachers aren’t really allowed to help you. You can talk to your peers about it and they can help you, and the teachers are there to support you, but they aren’t permitted to influence your project,” Veto said.

Ms. LaTourette, one of the two teachers for the AP Research program, echoed that sentiment when explaining the unique position the instructors have in the class. The College Board gives teachers a detailed list of types of support they can and cannot offer their students. The teachers can point their students in the direction of a solution through asking questions, but cannot explicitly provide the solution.

“We’re there as a resource and to teach certain skills that are part of the course, but in the process of them writing their academic paper, we aren’t allowed to sit down with them and provide direct feedback,” LaTourette said.  “Our role is to support and guide, but also to let them figure it out for themselves.”

According to LaTourette, AP Research teachers educate their students on three main areas of skill sets: the philosophical background of college level research, the various types of research methodology and the guidelines of how to conduct ethical research.

“We’re teaching students their full range of options, and the different choices they have to conduct research to answer their [research] question,” LaTourette said.

The class format emphasizes independence and self-accountability. Much like a real college research class, there is no one standing over the students’ shoulders to make sure they complete their work on time, according to Veto.

“Anyone could end up being successful in this class, but I don’t think it’s necessarily for everyone,” Veto said. “If you need someone to check in on you every once in awhile, it’s just not the class for you because you need to be a self starter, but if you’re dedicated to your project you’ll enjoy it.”

Veto, whose project is centered around analyzing the effect of social media on teenager’s perception of Hurricane Harvey, found that a critical aspect of the class appeal was the idea of picking a topic unique and important to each individual student.

“I have a best friend who lives in South Carolina who had to evacuate for Hurricane Irma, and then I saw all this stuff on social media, like the guy holding up the gun to the wave, and I didn’t think that was funny because it wasn’t at all what was going on,” Veto said. “So then I realized that social media has such a huge effect on me, and I needed to understand if it did on my peers, too.”

“For some people, the memes made the whole thing less serious, while for others the pictures of people with their houses destroyed made it more serious for them,” Veto said.

Aside from the opportunity to pursue a specialized interest, members of the AP Research course additionally gather valuable skills over the course of the year in how to properly conduct research and source analysis. For many AP Research students, the extensive research and emphasis on self reliability was beyond anything they’d experienced in other high school, and even AP, classes.

“What we’re learning is really college level stuff taught at a college level, not dumbed down for high schoolers,” von Franqué said. “Now we only pull from peer-reviewed journals, and the vast majority of our information is from the actual research we’re conducting.”

Van Dorsten echoed that sentiment by explaining the importance of the research skills she acquired through the program, and how it will impact her life after high school.

“I never really knew I could go beyond Wikipedia, and now I’m in these databases going through all of this scholarly work and writing research papers that flow well and that I wouldn’t feel bad submitting,” van Dorsten said. “I’m interested in doing medical research later on, so it’s been like an introduction to a thesis paper.”

The combination of independence both in terms of creativity and work management  produces a class unlike anything else Redwood has to offer, and serves as the reason why those who take it feel so passionately about their experience.

“I loved it because I was able to get my work done and manage my time, so I even had space in class to finish other stuff and balance my schedule because you make your own schedule,” Veto said. “Everyone who does it ends up getting super interested in their project and then it doesn’t feel like work anymore.”