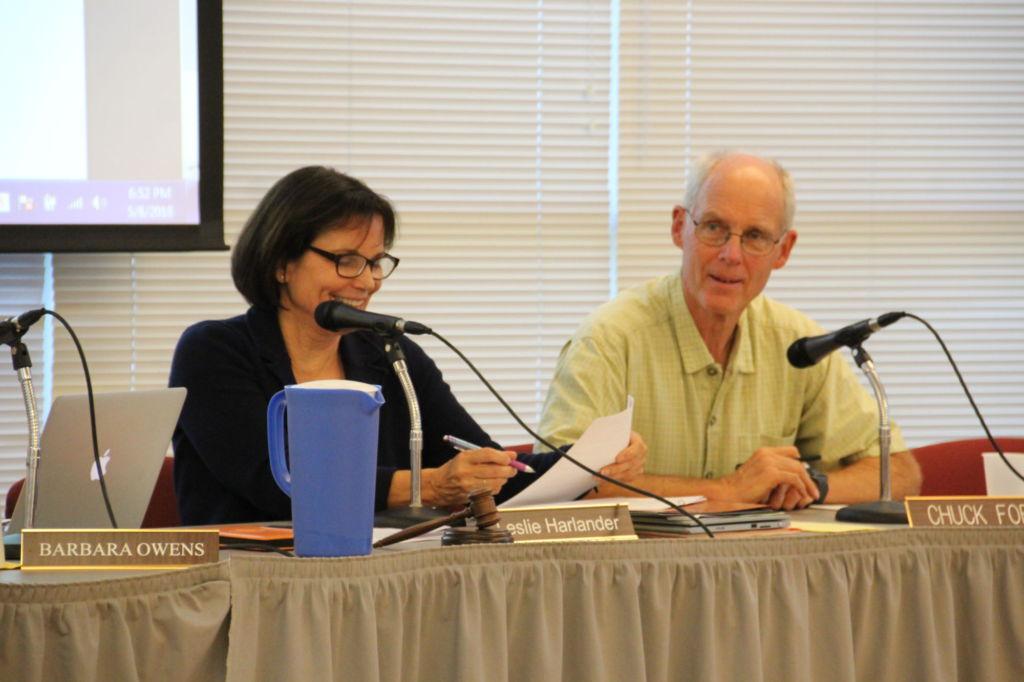 Board President Leslie Lundgren Harlander and board member Chuck Ford look over a resolution during the board meeting on May 8th.

After further discussion of the Tamalpais Union High School District (TUHSD) fiscal situation, additional revisions to the TUHSD Budget Reduction and Recovery Plan have been initiated by the Local Control and Accountability Plan Committee (LCAP) to combat increasing enrollment growth costs and budget deficiencies. With the revised budget plan, no employee positions will be laid off to limit student impact and disruption, and other organizational changes are being discussed.

Currently, the TUHSD is facing a $6 million budget deficit as a result of increasing enrollment and employee numbers, growth of the Special Education department and network infrastructure upgrades, in addition to other educational facilities such as the portable classrooms, according to the TUHSD First Interim Report.

Although issues pertaining to resource allocation have been foreseeable for a few years as enrollment growth has been on a steady incline, unexpectedly high enrollment numbers combined with recent state legislature brought additional budget deficiencies previously unaccounted for, according to Leslie Lundgren Harlander, President of the Board of Trustees.

“We have known for a long time that this was coming, mainly because we knew that there was an enrollment growth coming,” Harlander said.

To refine the budget outline and reduce budget deficiencies, TUHSD Superintendent David Yoshihara has worked in conjunction with county oversight from Deputy Superintendent Terena Mares and the Financial and Local Control and Accountability Plan Committee (LCAP), a collection of parents, staff, community members, board members and students that provide recommendations for budget changes.

“The Superintendent directed work groups to evaluate the enrollment growth, budget and facility needs. Work from these groups resulted in program adjustments and efficiencies, but these adjustments are not enough to address the magnitude of our growing costs,” Harlander wrote in an email to families within the TUHSD.

According to Yoshihara, the revised budget outline looks to cut budget expenses by approximately $2.8 million by next school year through organizational and administrative changes as well as the increased parcel tax.

“The LCAP/FA group was tasked with coming up with a targeted $3 million in cost reductions. The District is looking at ways to further reduce expenditures for 2019-20 and beyond,” Yoshihara said.

According to Harlander, the LCAP committee continued to revise their Reduction and Recovery plan to make sure that changes to the budget were being initiated outside the classroom instead of within. In March, discussion about cutting district librarians and athletic trainers sparked intense controversy within the community. Harlander said that the influx of community feedback about potential employee cuts influenced the decision to halt employee layoffs.

“The board remains committed to providing every student access to programs and services that support learning and maintain high-quality education. This includes supporting each student’s emotional and social growth, and a well–rounded educational experience at our schools,” Harlander wrote in the email.

Removing librarian and athletic trainer positions was initially proposed as a budget reduction solution to trim down employee costs. Other administrative and organizational changes are being organized to replace cuts in employee positions with other areas impartial to student learning.

As of March, to combat growing costs and budget deficits, the district set forth numerous reduction plans to decrease district spending. Since the TUHSD is a basic aid district, funding is acquired primarily through property taxes such as parcel taxes. In conjunction with oversight from professional consultants, such as the San Francisco company Whitehurst Mosher, the district decided to increase the district wide parcel tax by 50 percent, from an estimated $285 to $434 per parcel. The parcel increase will generate an additional $5 million per year for the district, according to an email sent by Harlander. Additional budget reductions for the 2018-2019 school year will supposedly reduce costs by $2.8 million.

According to Yoshihara, although the parcel increase will generate a substantial source of revenue for the district, additional budget refinements are being discussed as the district prepares for the possibility of the parcel tax not passing.

“A parcel tax of roughly a 50 percent increase will not solve the deficit. So there will still be some other reductions that are needed, but certainly a lot less than if we don’t pass the parcel,” Yoshihara said.

To replace the canceled reduction in employee costs, other administrative and organizational changes have been organized. Within Resolution 17-11 of the Budget Reduction and Recovery Plan, approved on March 13, classroom sharing is expected to increase to maximize classroom and staffing usage. Additionally, plans for new portable classrooms behind the big gym have been initiated to maintain the required student to teacher contractional ratio in a classroom. According to the TUHSD website, nearly 1,000 Redwood students, or over half of the student population, will have classes in the portables next year.

Additional alternative organizational efforts are still being developed with the oversight of Budget Study and Enrollment Growth Committees to make recommendations for fiscally prudent ways to reduce district spending, according to Harlander. These organizational changes include reductions of $100,000  in non-essential travel, $42,000 in food/beverage for school functions, $333,000 in instructional coaches, $1,063,500 in teacher leadership, $709,200 in reduction of hiring, and $560,000 in other budget adjustments.

Although the Budget Reduction and Recovery plan is in a constant state of revision, Harlander said she believes that the current plan set forth will provide enough leeway for the district to uphold the highest quality of education available. According to Harlander, even though budget fluctuations can be unpredictable, the district hopes that arising budget deficiencies will not deter from student growth and enrichment in the TUHSD.

“Ultimately students are our first priority; maintaining that high caliber of educational excellence offered by the TUHSD cannot be overlooked regardless of issues pertaining to the district budget,” Harlander said.