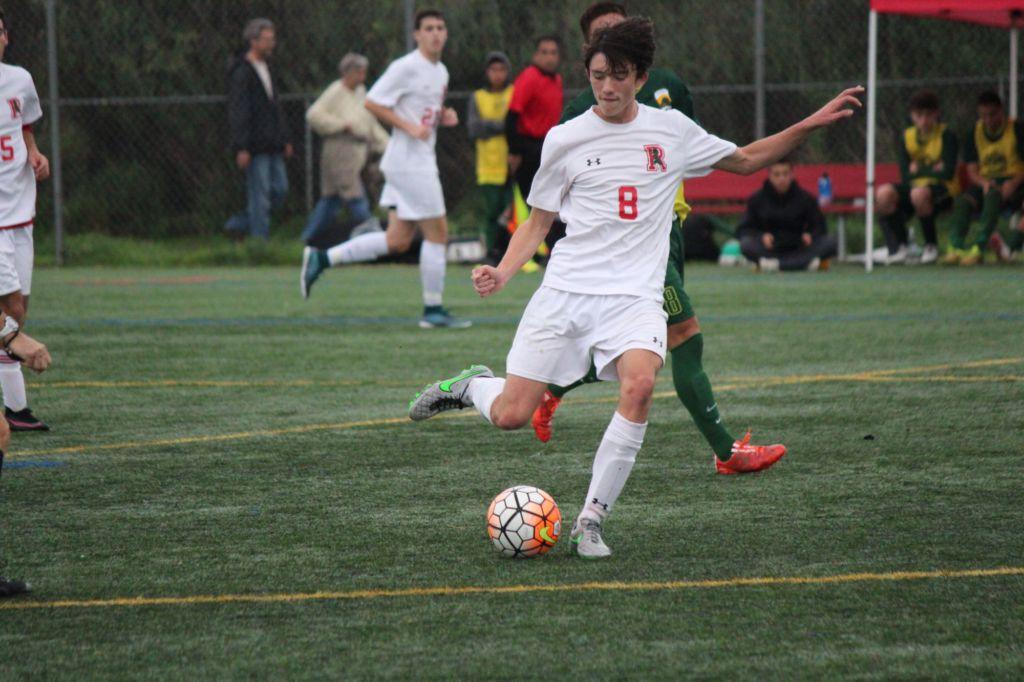 Students rushed onto the Marin Catholic field to join the boys’ varsity soccer team in celebration after winning the Marin County Athletic League (MCAL) Championships. Holding the victory pennant, senior co-captain Eamon Rogan beamed with excitement and soaked in what would be the culminating moment of his four years of playing varsity soccer. To top off his senior season, he was named MCAL player of the year.

Leading his team in goals, Rogan averaged 1.2 goals and 0.2 assists per game this year, scoring a total of 13 goals in 10 games, according to Max Preps. Along with being named MCAL player of the year, he was designated as the Marin Independent Journal Prep of the Week this past January and was awarded with the Mike Kavanagh Award at the senior athletic banquet, which is presented annually to a senior male noted for his athletic ability, scholastic achievement and community service. His hard work and dedication from a young age resulted in his many accomplishments.

Rogan began his soccer career by playing for small recreation leagues in San Francisco at the age of four. Growing up with a father who was a fan of soccer, the sport rubbed off on him at a young age. At 10, he began to play competitively for the Tiburon Peninsula Soccer Club and then continued on the Mill Valley Soccer Club. Currently, Rogan competes for Marin FC on the oldest, most competitive and highest-ranked team. His hard work during club seasons has proven to payoff in his high school career.

Throughout his four years of varsity, Rogan has left his mark on the soccer program. Winning MCALs his freshman and senior years as well as being a captain as both a junior and a senior, he has contributed to his team’s many accomplishments. According to Rogan, his role on the team this year was to be a leader and make sure all the members were playing to their full potential.

“This year, I helped make sure everyone was competing as hard as they could in every practice and game,” Rogan said. “We went the first 15 games undefeated, and winning MCALs just summed it all up.”

Not only did Rogan stand out on the field, but he also was a popular face amongst the Redwood community. Being involved in Leadership all four years of high school was another way he stayed connected with his peers, especially holding the title of ASB President this year.

According to Rogan, being immensely engaged in the Redwood community was advantageous and helped further develop his leadership skills.

“Being involved in so many things, it helps a lot with time management. The effect soccer has had is that it makes me more dedicated and academically inclined to work hard and be involved with the school,” Rogan said. “Whenever I’m playing, it’s easier to [get] my work done than when I have tons of time.”

Senior co-captain Brian Diaz has been playing alongside Rogan for the past three years on varsity soccer. According to Diaz, the team could always count on Rogan to step up and do whatever was necessary to win.

“His work ethic is really admirable. He doesn’t stop working hard, and was the soul of the team. I really looked up to him as a player,” Diaz said.

Next year, Rogan will be attending Georgetown University and hopes to continue to play soccer for a club team there. He was in contact with soccer coaches from some Division III colleges to play soccer, however he chose to attend a larger school in a major city. Rogan says there is still a chance he may be able to contact the coach of Georgetown and possibly walk-on for their soccer team.

According to Rogan, the transition from high school soccer to college club is going to be difficult. One of the things he admired most about playing for Redwood was his team’s chemistry each year, especially his senior year. Rogan thinks it will take time to form strong bonds with his teammates like he did at Redwood.

“I’ll miss the unity we had and also the personal relationships I built with not only my teammates, but the people at Redwood,” Rogan said. “It’ll be a big transition moving to the East Coast, but I am looking forward to it.”