Reload and reform: a look at gun control 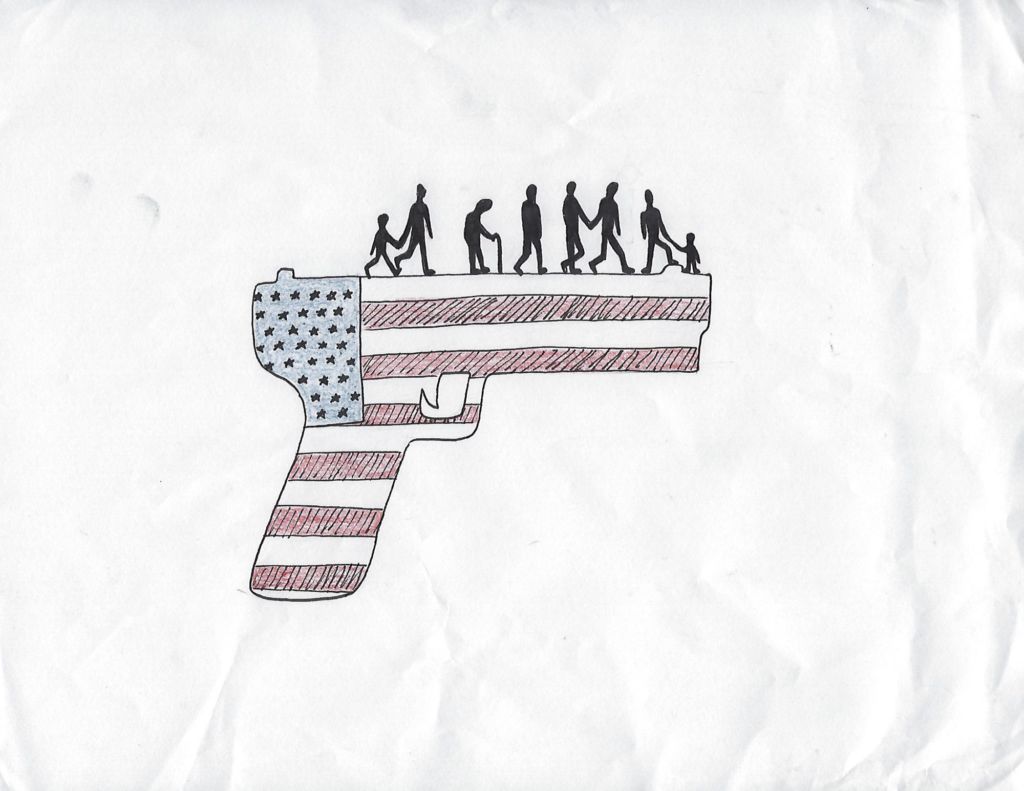 “I got lucky because I didn’t see anything. I only heard the gunshots and I was able to run. Some of my friends saw people get shot in their classroom. My friend was in a pile of blood. A lot of my friends saw dead bodies and had to walk over them when the SWAT team came to rescue them,” said Sari Kaufman, a sophomore at Marjory Stoneman Douglas High School in Parkland, Florida, in an interview with the Bark.

Kaufman said she thinks of herself as lucky for surviving the mass shooting, although she is still grieving the loss of her 14-year-old friend, Alyssa Alhadeff, from debate team and math class. Stories like Kaufman’s have become horrifically frequent in the media, from Sandy Hook to Las Vegas to Orlando.

The military-grade weapons of choice used in these mass shootings are the AR-15, the Glock-17, and Sig Sauer MCS. According to Kaufman, a common refrain that has resulted from these tragedies is that assault weapons should be banned. However, as Kaufman pointed out, an AR-15 rifle (the gun used by Parkland shooter Nikolas Cruz) is not an assault weapon. Kaufman said the term assault weapon is “too general,” as weapons that are not semi-automatic have been used in school shootings. Regardless of what these guns are called, Kaufman believes that there is little to no reason for an ordinary person to have military grade weapons for safety purposes. Yet many convicted criminals and those with mental health issues still manage to obtain them.

In the wake of the Parkland shooting, support for stricter gun laws has spiked to its highest level since 1993, according to a February CNN poll conducted by SQL Server Reporting Services (SSRS). Now, 70 percent of Americans say they support stricter gun laws, compared to 52 percent back in October.

Reidy is currently working with the Brady Campaign to Prevent Gun Violence, an organization that seeks legislation to get common sense laws passed by the federal government like the Brady Handgun Violence Prevention Act. This act was created by the Brady Campaign and passed in Congress in 1993 in the name of James Brady, President Ronald Reagan’s press secretary, who was severely wounded in an assassination attempt on the president.

The Brady Act established the National Instant Check System (NICS), a database launched by the FBI in 1998 that determines which persons are banned from purchasing firearms. These people include convicted felons (the largest category of firearm denials), individuals who have been legally declared mentally incompetent and persons convicted of domestic violence offenses. According to the Washington Post, between 1994-2016, the Brady Act has prevented over 3 million guns from being sold.

However, according to Reidy, there are major loopholes in the Brady Act. A Washington Post article found that one out of five gun sales occur in a “no questions asked” private transaction where no background checks are conducted. This kind of sale usually takes place on the internet or at gun shows. Sales that are unregulated can potentially make guns available to people who would normally not have access to them such as convicted criminals and the mentally unstable.

The NICS also suffers from incomplete records because states are not required by law to supply records to NICS databases, and according to NPR, only do so on a voluntary basis. In most cases, these records are inconsistent, incomplete, unclear, or never make it into the database in the first place.

According to Reidy, the NICS is only as strong as its weakest link, and all states need to have strong reporting systems to ensure consistent protections nationwide. Reidy also said that only half of the states in the country require background checks when a gun is purchased. For example, although California has relatively strong gun background checks, neighboring Nevada has a particularly weak background check system impacting California. According to Reidy, “Everytime there is a gun show in Nevada, the gun related crimes spike in California.”

Fix NICS, a recently passed act, will make $125 million available to each state every year from 2018 to 2022 to incentivize their participation in NICS and encourage states to upgrade their reporting systems. Fix NICS punishes federal agencies by prohibiting bonus pay for the agencies’ public appointees if they fail to upload relevant records into the database. The bill also uses some of the money to help enhance school security and invests in early intervention programs to stop school violence through an act called Students, Teachers and Officers Preventing School Violence (STOP).

Fix NICS was a response to the 2017 massacre of over two dozen people at a church in Sutherland Springs, Texas by a gunman who had previously pleaded guilty to domestic violence in a military court martial, according to the Washington Post. The U.S. Air Force acknowledged that it had failed to add the conviction to the report which would have barred the gunman from buying the guns he used.

Fix NICS was signed into law on March 23 as part of the omnibus spending bill. However, Kris Brown, Co-President of the Brady Campaign, called it “a tiny, baby step forward.”

Meanwhile, the NRA is supporting a legislation called the Concealed Carry Reciprocity Act. With the act in place as of now, conservative states such as Arizona and West Virginia allow almost anyone to carry a loaded firearm in public, while in liberal states such as California, it can be a felony. However, according to Congress, the Concealed Carry Reciprocity Act may make concealed carry gun permits more like drivers licenses. Therefore they would be transportable across state lines. Those who are allowed to carry a concealed weapon in their home state will be able to carry it in all 50 states. The Act passed in the House of Representatives in December 2017 and is headed to the Senate where, according to the Washington Post, its prospects are dim.

A protective action that could be required at the federal level is the Extreme Risk Protection Order (ERPO). ERPO prevents individuals with a high risk of harming themselves or others from accessing firearms. By allowing family, roommates and police to obtain a court order when there is evidence that the person poses significant danger, ERPO restricts access to guns to these individuals who are not capable of handling them. Some of these mass shooters were known to have violent tendencies or criminal pasts such as being domestic abusers and convicted criminals. Had ERPO been in effect, it could have potentially saved the students in Parkland and other people who have been harmed by gun violence. There were numerous red flags and warning signs that could have resulted in Parkland shooter Cruz’s arsenal of guns being taken away.

Paul Gold was a next-door neighbor to the Cruz’s in both 2009 and 2010 and noticed Nikolas Cruz’s abnormal behavior.

“He had emotional problems and I believe he was diagnosed with autism,” Gold said of Nikolas Cruz in a New York Times article by Richard Fausset and Serge F. Kovaleski. “He had trouble controlling his temper. He broke things. He would do that sometimes at our house when he lost his temper. But he was always very apologetic afterwards,” Gold said.

Similarly, Cruz would not have been able to buy assault weapons had there been a minimum age of 21 required to buy guns. Advocates of a minimum age requirement for guns reason that unless you are 21 or over, you cannot buy alcohol because brains are not fully developed until 25 according to the Rochester Medical Center. Yet when youth are just 18-years-old, they can buy guns. According to the New York Times, in Florida, it was easier to buy an AR-15 than a handgun, for which you were required to be 21-years-old, prior to the Parkland shooting. After the shooting, Florida passed a bill raising the age to 21 to purchase all guns. In response, the NRA has sued Florida because they believe the age requirement violates the Second Amendment.

The focus on raising the age of gun buyers is not random. According to the organization Everytown for Gun Safety, using FBI and census data, individuals ages 18-20 commit homicides using guns at a rate that is four times the rate for those over 21.

Though California is often considered to have strong gun protections, California gun laws do not require permits to purchase firearms or to register rifles and shotguns. However, these laws do require the registration of handguns and firearms that are considered “assault weapons.”

Freshman Sam Bonder is a pro-gun advocate who staunchly believes in the Second Amendment’s right to bear arms. Bonder does not think that stricter gun laws should be enforced, although he does agree that more accurate background checks should occur, a precaution that could possibly reduce the frequency of school shootings in the future.

“We should definitely crack down on illegal purchasing of guns because that could’ve stopped the Columbine shooting,” Bonder said.

Bonder also said he believes ERPO is fair. Although he acknowledges the need for ERPO and background checks, he said, “We cannot infringe on people’s right to own guns.”

In spite of the protections that background checks and ERPO may offer, Bonder said that “There are 310 million guns in the U.S. and criminals will find a way to get one.”

Bonder also said he thinks that the right to gun ownership is important from a self-defense standpoint.

“There have been convicts who agree they would be less likely to commit a crime if they knew or thought the victim was armed,” Bonder said.

Similarly, he believes that raising the age limit to buy a gun to 21 is an inadequate idea.

“We can’t trust 18-year-olds to live by themselves if they cannot protect themselves,” Bonder said.

Although the United States struggles to find a solution to the ongoing controversy regarding gun control, Australia found an alternative method of dealing with it. After a gunman with two semi-automatic rifles killed 35 people and wounded 23 more in a mass shooting, the public was horrified and the government mobilized. There was a massive gun buyback program where the government bought back and destroyed over 1 million firearms. The government entered into three national agreements, which included a ban on military weapons, high capacity semi-automatic rifles and pump-action and semi-automatic shotguns holding over five rounds. The agreements instituted a system of licensing whereby license holders must demonstrate a “genuine reason” for holding a firearm license and cannot be a person prohibited from carrying a gun. It also established ownership controls where all firearms must be registered by the gun serial number to the owner. There has not been a mass shooting in Australia since.

Kaufman and her fellow students from Marjory Stoneman Douglas High School, labeled by Time magazine as “the Young and the Relentless,” are leading the charge for gun reform in our country. Reidy and her counterparts at the Brady Center and Moms Demand Action continue their efforts, buoyed by the achievements of students. Most recently, on April 20, there was a student walkout across the nation to lobby for stricter gun laws. At Redwood, mostly freshman and sophomores participated, but on a larger scale, on March 24, hundreds of thousands of students, parents and community members participated in March for Our Lives rallies and marches across the nation. Addressing the March for Our Lives crowd in Parkland, Florida, Kaufman urged her fellow students “to make this moment a movement.” She exhorted her classmates to vote out politicians in office who receive money from the NRA. “They think we are all talk and no action,” Kaufman said.