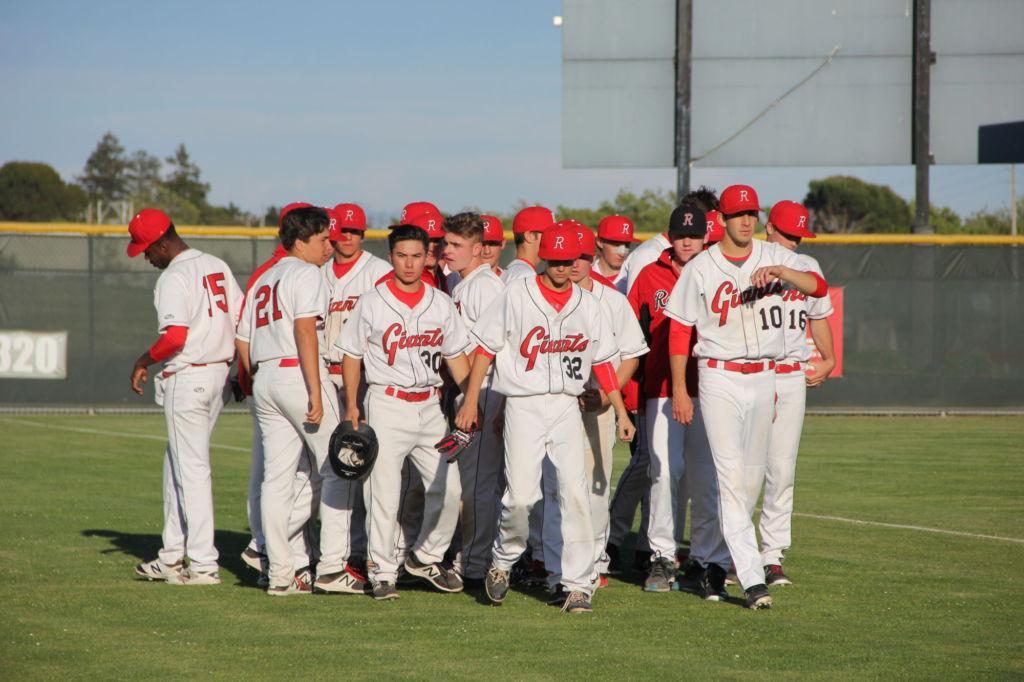 Redwood's team walks back to the dugout after a disheartening game.

This past Tuesday, May 1, Redwood’s varsity baseball team suffered a 12-1 loss against Tamalpais High School (Tam), moving Redwood into fifth place in MCAL with an overall record of 13-6-1. Though the Giant’s offense and defense were satisfactory, a lengthy pitching predicament put Redwood at a disadvantage, resulting in Tam’s victory.

Redwood and Tam have had similar standings nearly all season, and the Giants defeated the Hawks in their last match-up by a score of  2-0. Consequently, this left many Giants fans and players taken aback on Tuesday, especially with playoffs starting on May 15.

The first inning was full of action on both sides with Tam quickly scoring two runs. Redwood senior Dane Goodman scored Redwood’s only run for the game in the first inning. During the second inning, the Hawks scored three runs, then took home four runs in the third. They maintained loaded bases for some time before junior pitcher Jackson Bender induced the final out of the tumultuous inning. Tam’s strong offense in combination with a struggling pitching staff on Redwood’s side proved too difficult of a challenge for Redwood to overcome. However, Redwood batters continued to fight through the inning, with junior Jackson Barry hitting a double.

Junior pitcher Kyle Felder recognized the obstacles that the Giants faced without strong pitching, though he is hopeful that in the next few games Redwood can build team morale.

“Our pitchers did not perform well. I think we hit the ball hard but it didn’t find any gaps,” Felder said, “Hopefully [in the future] we can walk less people and find some holes in their bats.”

Progressing through the game, Redwood’s defense remained strong, keeping Tam from gaining runs. Likewise, Tam pitcher Jack Loder held strong through the inning and the entire game, only giving up one run. By the fifth inning, defense continued to support Redwood’s pitching, which fell short, allowing for Tam to score three more runs. With Redwood at bat, senior Dio Cornet hit a double and was driven to third base with a single from senior Luke Zlatunich, but no runs were scored. Through the entire game, Redwood’s pitching staff walked ten Tam players, according to Coach Mike Firenzi.

Tam senior Sam Pletcher hopes that the win will be a good omen going forward, especially in terms of Tam’s competition with Redwood.

“We are currently in the thick of it for that two seed, and Redwood is one of those teams that is right there with us. This game is huge, just setting the tone for the rest,” Pletcher said.

Despite an increasing score for Tam throughout the game, Redwood’s players continued to fight through the sixth and seventh innings, halting Tam from scoring any more runs.

Coach Firenzi, though frustrated with the results of the game, recognized the effort and accomplishments of Redwood’s team on Tuesday despite a loss. For the future, Firenzi hopes to continue refining Redwood’s pitching to end their season strong.