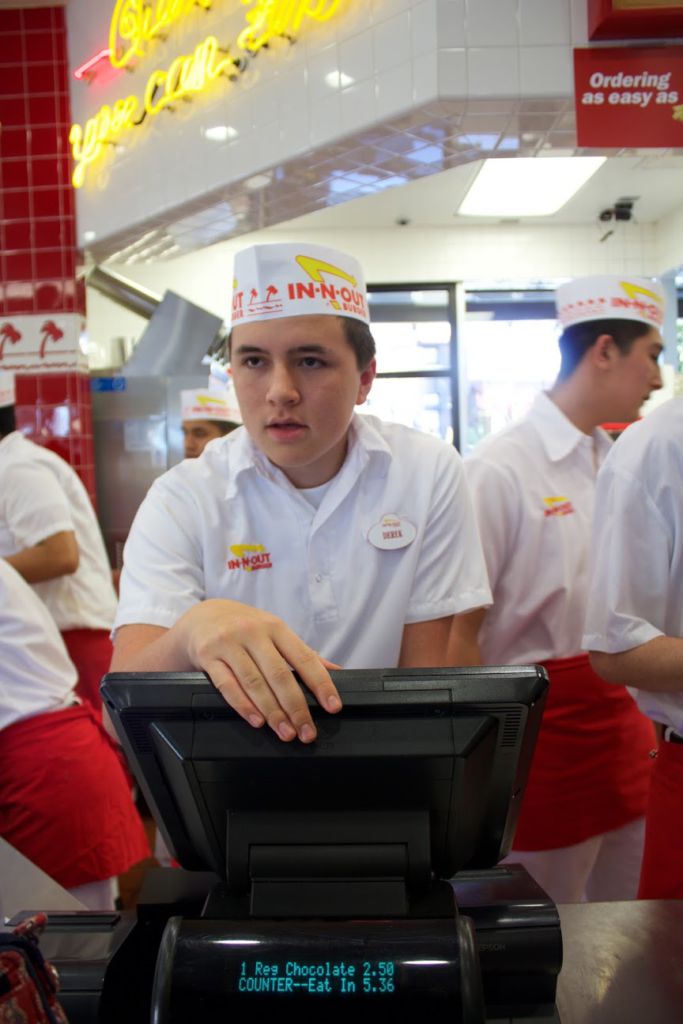 It is 12 a.m. on a Friday night and crowds of teenagers walk in through the brightly lit double doors of In-N-Out Burger in Mill Valley. Employees have many jobs and work up to six hour shifts. Juniors Derek Bindels and Kiyan Darznik know this routine like the back of their hand.

Both Darznik and Bindels started their work careers at In-N-Out because of the friendly environment and starting wage. According to Darznik, during the four months he worked at In-N-Out, he bonded with his co-workers and enjoyed friendly customer attitudes. This accepting atmosphere is complemented by the highest paying wage in the fast food industry.

While most fast food restaurants pay their workers under $8 an hour—less than the California minimum wage—In-N-Out in Mill Valley starts their employees at $14 an hour, though pay rates vary based on location. This means that Mill Valley has one of the highest pay rates of any fast food restaurant in the country. According to Business Insider, the average wage for a manager of a fast food eatery in the United States is $48,000 annually. Employees at In-N-Out can eventually work themselves up to $120,000. This is otherwise unheard of in the fast food industry.

According to a study in 2017 by Glassdoor, manager salaries at In-N-Out align with the salaries of attorneys, doctors, architects and engineers, which are some of the highest salaries in the workplace. Along with higher wages, In-N-Out also provides vision, medical and dental health benefits to both full and part-time workers.

Bindels has worked at In-N-Out for only about one month. He works four days a week as a level one employee, meaning he is in charge of clean-up and janitorial duties, restocking napkins and handing out burgers over the counter.

Both Bindels and Darznik emphasized the organized routine of their responsibilities.

“Working at In-N-Out is sometimes stressful because it’s always busy and there is a constant pattern of the work you do,” Bindels said.

The food business is a common first job among many teens because of the industry’s diversity in terms food culture and various working positions that offer a wide range of training. Before working at In-N-Out, Darznik had no prior work experience.
“It was a great first job, but I wouldn’t continue it long term because it was very repetitive, and the manager put a strong emphasis on using a specific script when taking an order,” Darznik said. ‘Scripts’ are commonly used at fast food restaurants to make every customer interaction the same, usually referring to the same language and tone.

He describes this routine as “robotic” which took away the fun in customer interactions. After working at In-N-Out for over four months, Darznik quit and began working for his father’s new business and cherished the more open-ended interactions rather than the structure he was accustomed to at In-N-Out.

On the other hand, Bindels really enjoys the structured work and looks forward to continuing working there.

“Hopefully I can continue working at In-N-Out until I am done with college. I will of course need money while in college and I think continuing to work there will provide me with a handsome salary, as well as a job I look forward to,” Bindels said.

Bindels has a very strong respect for the work he does and hopes to incorporate those skills into his future jobs.

“I think having an experience like this will help me incorporate some of those characteristics to everything I have done and will do in future jobs,” Bindels said.

Both Darznik and Bindels are thankful for the experiences given to them by working at In-N-Out and have a new appreciation for people working in the fast food industry.

“In-N-Out has given me a sense of pride and strive for hard work,” Bindels said. They both expressed how gratifying and constructive it was to have their first job be at In-N-Out and would definitely recommend it to kids who enjoy structured and organized working environments.