March for Our Lives movement advocates for safety in schools 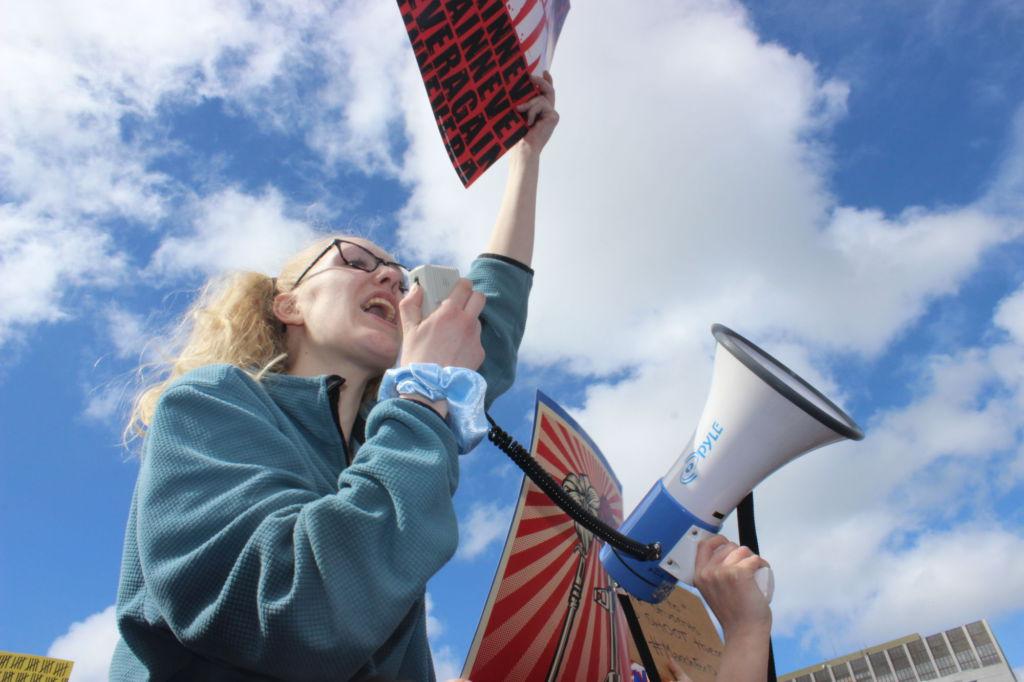 Thousands gathered at the San Francisco Civic Center to protest America’s gun laws and the government’s response to the recent mass shootings across the country. The center was filled with students and adults in support of school safety and stricter gun control. It is estimated that around 800 marches were held on March 23 and 24 all around the world with around 800,000 protesters in D.C. alone, according to NBC News.

The school shooting in Parkland, Florida last month that resulted in the deaths of 17 victims was one of the main causes for Saturday’s march, according to the March For Our Lives website. This and many other school shootings have lead to movements such as #NeverAgain and “Enough is Enough,” which were created by the students at Marjory Stoneman Douglas High School, the site of the Florida shooting. These movements prompted millions of Americans to attend the March for Our Lives protests all around the country.

Redwood students participating in the event held signs and led chants. They waved posters with messages such as, “I just want to feel safe again,” and “Not One More.” The signs were held up in protest of the latest mass shootings and  in supporting gun reform for America. Seniors Rob Hoffman and Alicia Furst attended the march, chanting statements such as, “Hey hey, ho ho, the NRA has got to go!” into a megaphone.

Principal David Sondheim participated along with other faculty members, including science teacher Melissa Boles, who organized the group of teachers that participated. The teachers wore specially-made T-shirts that read “Redwood Resistance.”

“We have a fairly politically active teaching population here at Redwood. This is a group that is, with some regularity, demonstrating things or writing letters to policy makers,” Boles said. “When I reached out to the group, I assumed that they would be interested in participating.  It was more like, ‘Since we’re all going to do this, let’s figure out how to do it.’”

Boles said she was proud of everyone who attended the event, as well as the students who had been fighting for gun control in other settings like the student walkout on March 14.

At the march, organizers walked around passing out voter registration forms for participating students. Juniors Ellah Chapman and Leela Dembowski signed up to be registered voters for the 2020 election.

“I’ve seen so much political turmoil occurring in this country and knowing that I can make a difference just by voting makes me happy, knowing I have a say in politics in this country,” Dembowski said.

People of all generations were marching, chanting and holding up homemade signs. Children sat on their parents’ shoulders, babies held onto their mothers and older generations marched along with the younger.

There were scheduled speeches from activists who spoke out in front of the crowd, such as Jennifer Siebel Newsom, the wife of California lieutenant governor Gavin Newsom. Gavin Newsom has recently started some of the largest reforms passed towards gun control in the country, according to the LA Times. This includes not only evaluating gun owners before purchasing guns, but also running background checks on people before they can purchase ammunition, as proposed in Proposition 63.

Many young activists participated as student speakers during the two hour rally preceding the march next to the San Francisco Civic Center.  These speakers consisted of age groups ranging from middle to high school students.

Two young middle school speakers, Charlotte and Dylan Dodson, spoke together in one speech regarding what changes the younger generation is capable of implementing.

“We are the generation that has grown up with school shootings, but we are the generation that will stop them. We are children and teenagers but we refuse to be passive witnesses of history. We are change-makers and we won’t sit and wait until we’re old enough to vote. That is why we are here today, we are motivated, we are ready and we can make a difference,” Charlotte and Dylan said.

Senator Dianne Feinstein spoke at the event, advocating for the student’s voices to be heard.

“Young America is stepping up. They are stepping out and they are saying ‘Never again,’” Feinstein said.

Farrell said he was concerned about the current measures the White House is taking towards addressing gun control in his speech during the rally.

“Why I’m excited [to be a part of this movement] as a parent of three young kids is because we see year after year, Sandy Hook, we see Parkland, and Washington, D.C. does nothing,” Farrell said. “I am here today to stand with you to say enough is enough. It is about the youth of our country today to make the difference.”

Charlotte proclaimed that the younger generation will change the future of gun safety for years to come, a sentiment echoed in her brother Dylan’s final words.

“They will only grow louder in 2022 and 2024 when middle schoolers like us will elect representatives who recognize that we are the future. We are here and we are not going away,” Dylan said.