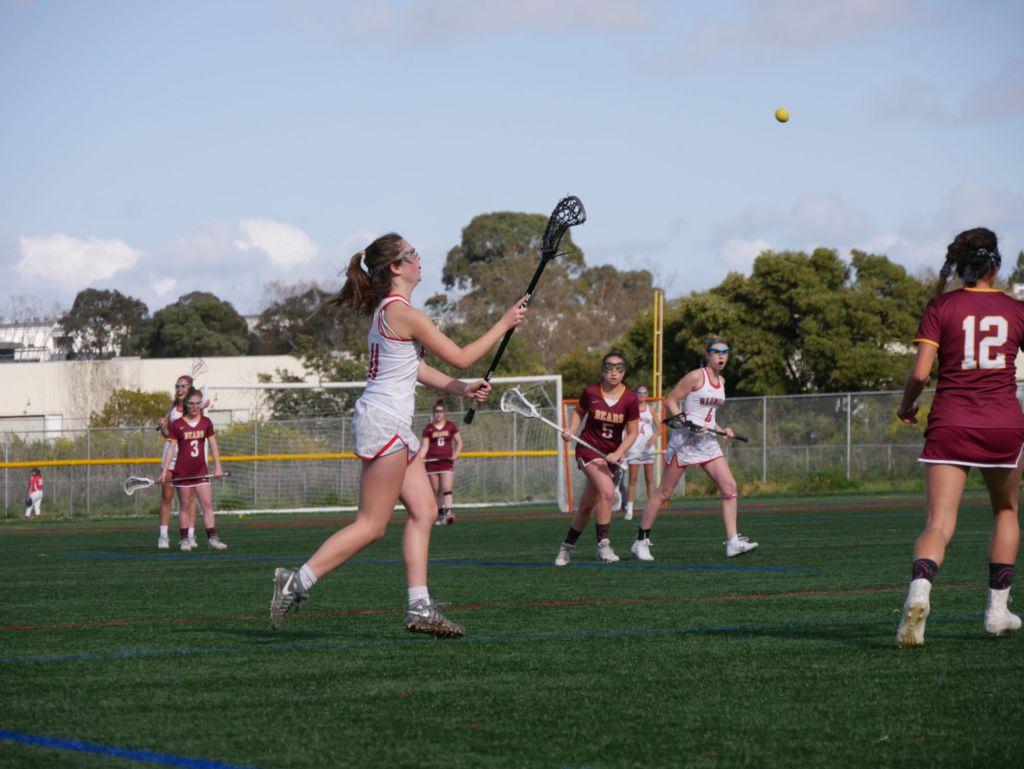 Junior Lucy Robbins catches a pass from a teammate

After a shaky start to the game, junior Amanda Morse and senior Caroline Watkins, the team captains, scored successive goals to bring the Giants within two points by the middle of the first half.

Morse and Watkins are already known to be high scorers; before Friday, they had scored 19 and 10 goals this season respectively, according to MaxPreps.

A series of completed passes followed by some brilliant shots on goal brought the Giants to a close scoring game at the half. The Giants were down by just a point, with a score of 6-7.

With an emphasis on defense, the Giants came ready to play in the second half. After only a few minutes, they had ripped another shot past the Menlo-Atherton goalie to tie the score.

Sophomore Lauren French, a two-year varsity player and starting defender, commented on the amazing defense during the game.

“I think our defense has definitely improved. I mean, we saw that today, with the shutout in the second half, and we’re only getting better. We’re going to keep improving as the season goes on,” French said.

French also remarked that the team’s spirit is what makes them so close and brings them success during games. They blast upbeat music during their warm ups and cheer loud for their teammates on the field.

“We’re going to keep bringing the energy every single day at practice and during the games,” French said.

Nevertheless, according to varsity coach Kyle Kennedy, the unfortunate loss against MC two days earlier put a temporary hamper on the team’s spirit.

“The MC game was a little tough. It didn’t quite go the way we wanted it to, although we played MC significantly better,” Kennedy said.

Some solid defensive stops ended Menlo-Atherton’s scoring streak and prevented them from making another shot for the remainder of the game. The game also proved the resilience of this team.

“This was a great pick-me-up game after [playing MC]. The ladies played extremely hard and showed some great defense,” Kennedy said.

According to French, one of the team’s goals this season is to rematch MC and win.

“Hopefully when we play MC again, we’re going to beat them. We just have to get better and work on our transitions,” French said.

The Giants are now 1-1 in MCALs and 5-4 overall. Their next game is at home versus Acalanes on March 27.