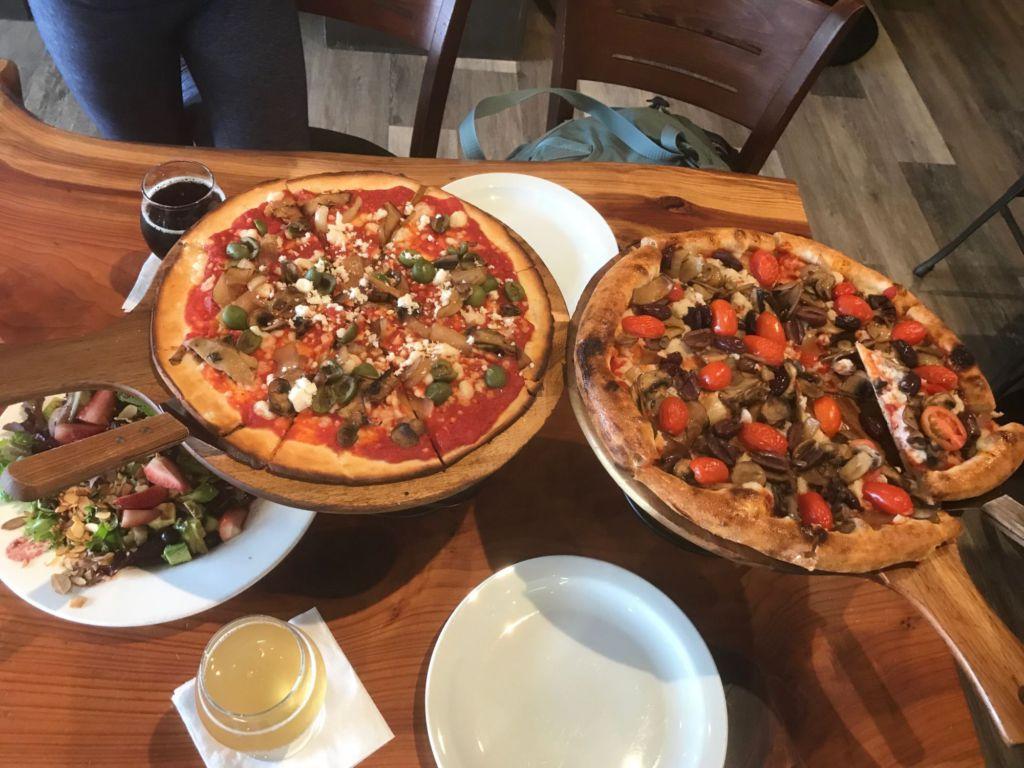 While plenty of artisan pizza restaurants have graced the streets of Marin, Creekside Pizza and Taproom already stands out as a local favorite. Located at 638 San Anselmo Ave. in downtown San Anselmo, Creekside not only captures Marin culture through the menu items and design of the restaurant, but also has an incredibly welcoming environment. Opened in November 2017 by owner Pat Townsley and head chef and Redwood graduate Janet Abrahamson, Creekside Pizza and Taproom has quickly become a successful new businesses in Marin, receiving the title of Readers Choice and Best New Dining from the Marin Independent Journal.

Both the menu and design of Creekside Pizza and Taproom are based on physical and cultural aspects of Marin, which can be seen through the use of local lumber in the interior of the restaurant and through names of menu items. A customer will immediately notice a rustic interior and open kitchen, which allows visitors to watch chefs prepare meals. Redwood and Cedar wood line the walls, giving the restaurant a casual feel while also highlighting Marin’s natural attractions, including Muir Woods and Mt. Tamalpais. The strategic use of storefront windows and mirrors not only open up the small dining space, but also provide a view of Mt. Tamalpais and the streets of downtown San Anselmo. At night, the design goes from an earthy daytime ambiance to a sleek and edgy atmosphere.

Creekside’s menu also captures rustic and trendy aspects of Marin culture and demonstrates careful consideration and precision in all food choices. The Sweet Heart Salad combines a unique blend of lettuce, fruits, vegetables, nuts, and goat cheese with a blackberry vinaigrette for a thoughtful combination of sweet and savory. The November Rain pizza balances three types of mushrooms without overwhelming the taste buds. Other menu items such as The Sleeping Lady pizza, a reference to Mt. Tam’s ladylike silhouette, and the Deconstructed Meatball Sandwich, put a trendy spin on classic Italian staples. The aspect of popular Marin trends are incorporated into the menu through the use of ingredients such as Kombucha, Avocado, and Goat Cheese. All of Creekside’s pizzas are made with dough that has been “proofed,” or allowed to rise for up to 48 hours, as well as their signature red sauce. Additionally, head chef Abrahamson takes pride in the restaurant’s use of locally grown produce used to make all menu items. Creekside also offers pizza made with dairy free cheese and gluten free crust in consideration of customers with dietary restrictions.

While several Marin pizza establishments boast a rustic interior and artisan menu, it is the hospitality that sets Creekside apart. While restaurant owners and chefs usually take responsibility for the business and food served, Townsley and Abrahamson usually can be seen taking orders and busing tables. The waiting staff does a great job of making sure every customer’s needs are taken care of and somehow manages to keep the wait time minimal, even on busy nights. Outside of the restaurant, Creekside shows appreciation for the Marin community by giving discounts to police officers and firemen and maintaining two local fundraisers that benefit families of fallen Marin police officers as well as high school students interested in going to culinary school.

One drawback of Creekside Pizza and Taproom is the high prices due to the expensive ingredients used. Prices of menu items can range from $8 for a single toss salad to $26 for the Meat Lover pizza. Most pizzas cost between $18 and $26 , while other Marin artisan pizza restaurants, such as Tamalpie Pizzeria and Boca Pizzeria, charge between $16 and $19 for a pizza the same size. Another downside is that Creekside’s quick rise to popularity often causes the restaurant to be crowded and noisy. However, the food is unlike anything that can be found at competing artisan pizza restaurants, and the environment can instantly make a customer feel at home. Creekside Pizza and Taproom is a restaurant that can be enjoyed by anyone with a sophisticated palate and appreciation for Marin culture. For more information, visit http://www.creeksidesa.com or find Creekside on Facebook at @creeksidesa.