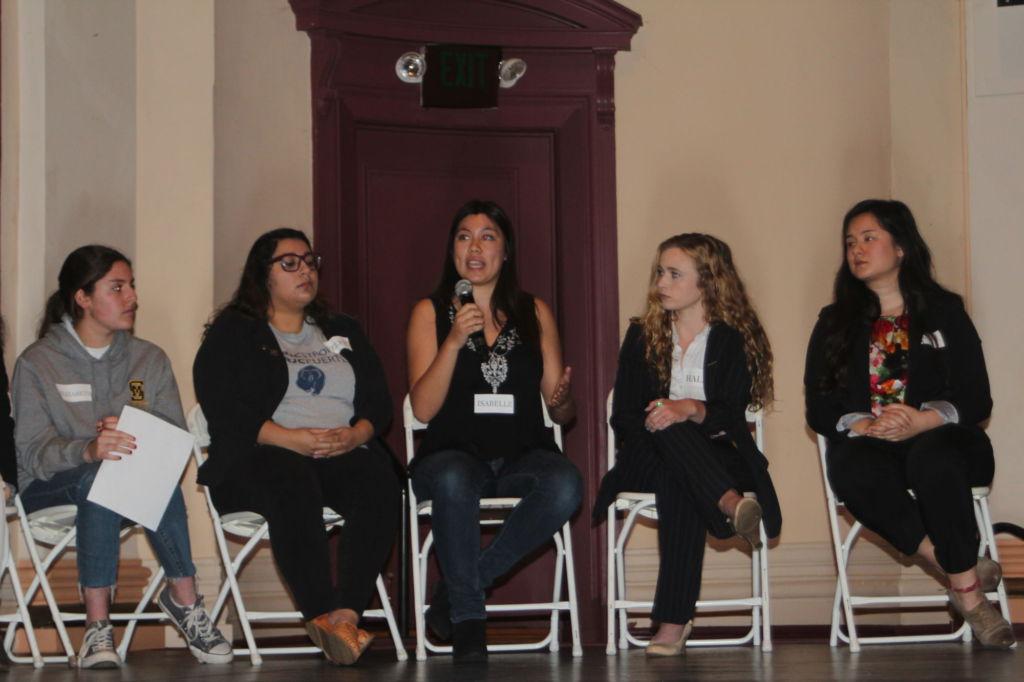 On Sunday, March 17, children, teenagers, parents and other community members gathered at Dominican University in San Rafael to attend a youth-led seminar on gun control, mediated by Congressman Jared Huffman. At the summit, college and high school students from across the Bay Area discussed the recent uproar over gun violence and shared their political perspectives on the issue.

Joined by the 18 students on the panel were representatives from organizations such as Beyond Differences, The Brady Foundation and Moms Demand Action. Congressman Huffman posed questions from the audience to the panelists, and also responded to subsequent student questions which were directed at him.

According to Huffman, since the shooting at Sandy Hook Elementary School in 2012 where 20 first-graders and six adults were killed, more than 400 people have been shot in over 200 school shootings across the nation. The most recent shooting took place at Marjory Stoneman Douglas High School (MSDHS) in Parkland, Florida on Feb. 14, where 17 unarmed students and teachers were killed.

Following the Parkland shooting, many MSDHS students have become nationally-recognized advocates for school safety and gun control, such as senior Emma Gonzales. Students across the country, including in the Bay Area, have similarly stepped up as leaders to demand stricter gun control laws.

Although Gonzales was expected to attend the event, she left many disappointed as she was stuck on a plane and could not to attend. Many people had wanted to hear what Gonzales had to say, according to Huffman.

Although Gonzales wasn’t present, a 2015 MSDHS graduate, Bradley Thornton, attended the seminar via Skype to share his thoughts. Thornton has worked with past and current MSDHS students to address bullying and gun violence across the country. Huffman asked Thornton about the community response following the Parkland shooting.

“The shooting was a month ago, but it feels like a lot longer than that,” Thornton said. “I know that students and staff can all say that this has probably been the longest month of their lives. The first week back was all half days with no curriculum, lots of counselors and overall a week of healing.”

Renee Marcelle, a woman who attended the seminar with her eighth-grade son, said she wanted to expose him to relevant perspectives around the topics of gun violence and gun control.

“I believe it is vital for my son to be present today, to hear the debate and become an activist, because activism is the only way that we are going to be able to get close to solving this problem,” Marcelle said.

One of the organizations represented at the event was Moms Demand Action. It was founded by Shannon Watts, a mother of five whose children had all attended Sandy Hook at the time of the shooting in 2012.

According to member Jennifer Gonzalez, a member, Moms Demand Action hosts marches and does extensive legislative work in order to push their beliefs on common sense gun reform.

“Wherever there are NRA-backed gun laws, we are there to speak for moms,” Gonzalez said.

Throughout the seminar, many students asked Huffman about what actions they could take to influence gun reform. Huffman explained that Congress tends to let controversial issues die down so that people will forget. He advised that the best way to stop this from happening was to keep putting pressure on legislators to enact change.

“Don’t let this topic slip away. Not this time, we are not going to let this one run away from Congress,” Huffman said.

According to Huffman, one of the ways students can get involved is to participate in the student lead March For Our Lives Movement. People from all around the United States will be protesting through the March For Our Lives movement on Saturday, March 24. Nationwide rallies are being held in big cities such as Washington D.C., New York City, Boston, Los Angeles and San Francisco.

Although the crowd was filled with adults, there were many teenagers and students, including some Redwood students. Freshmen Zeke Johnson said he liked hearing from from all sides of the gun control debate.

“This is a really complex issue with lots of different perspectives from people who are on the metal health side and the people who are pro-guns. It was interesting to see a lot of young people talking and showing their voice and power,” Johnson said.