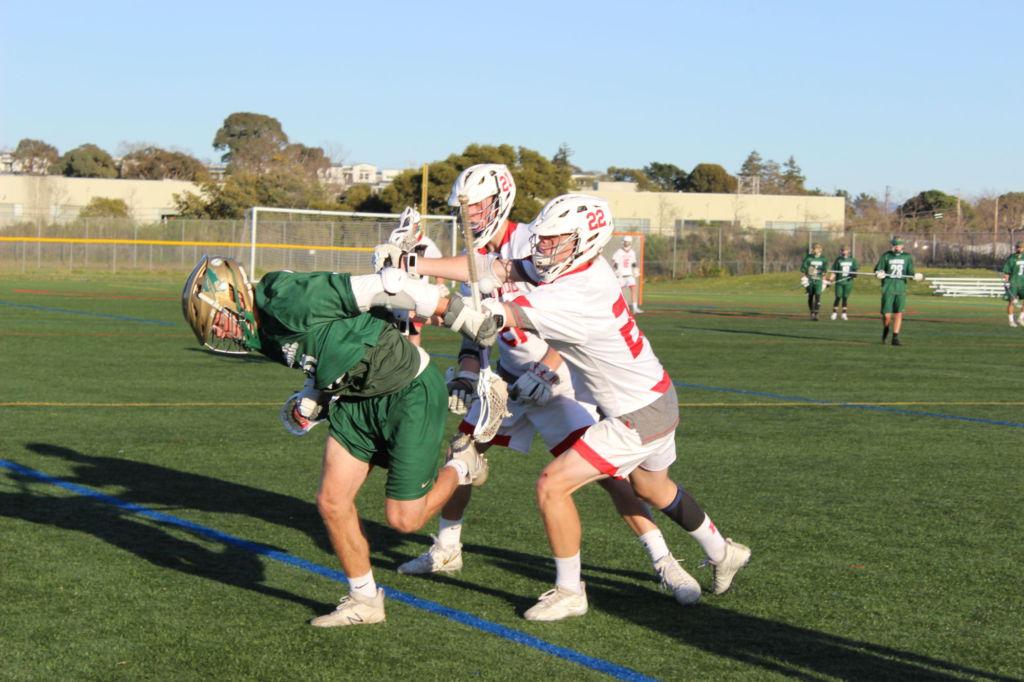 Teaming up on defense, Redwood players force an opponent out of bounds.

On Tuesday, Feb 27., the Redwood boys’ varsity lacrosse team beat Casa Grande High School with a final score of 19-10. After a tough loss earlier this week against the De La Salle Spartans, the Giants pulled their first victory in their second game of the season.

The game started off with the Giants gaining possession of the ball from the face off, which was then passed down to the offensive end, resulting in a goal scored by senior Brendan Hackett. Casa Grande controlled the play after the next face off but Redwood was able to regain possession and junior Luke Elders quickly scored. For the rest of the quarter, the game consisted of a similar pattern of Redwood dominance, resulting in a 5-2 Giants lead.  According to Senior Darren Miyawaki, the team entered the game motivated and ready to get their first victory of the season.

“We really just came out with energy and brought the team spirit up,” Miyawaki said.

In the beginning of the second quarter, Redwood struggled to maintain possession of the ball, forcing them to defend more shots. The Giants allowed Casa Grande to score four goals and the half ended with the Giants leading 7-6.

The second half started out slowly, with no goals being scored until four minutes into the third quarter. Yet, it was evident through an increased amount of team communication and overall quality of play that the Giants had brought more energy and determination to the field coming out of half time. Redwood increased their time of possession by avoiding turnovers and preventing the Gauchos from moving down the field, while also scoring five goals in the period. The quarter ended with a score of 14-8, with Redwood in the lead.

The game finished on a high note with Redwood using skilfull passing and good offensive positioning to score five goals in the final quarter. It was evident that the team’s increased motivation during the second half paid off as the game ended with a score of 19-10.

According to junior Harri Hetrick, the first half started off slowly because the Giants underestimated Casa’s energy and skill. However, Redwood was able to better adjust to Casa Grande’s level of competition in the second half and finished the game strongly.

“In the first half, it was hard because I think we weren’t really expecting for them to come out and be able to finish, but then we picked it up in the second half. We all got a little more mojo, a little more fire,” Hetrick said.

The players attributed the game’s success to good chemistry amongst the players. According to junior Miles Dean, a strong connection between teammates is helping to strengthen their team chemistry, both on and off the field.

“We really are starting to pick up the chemistry and working well together, we got the results today,” Dean said.

The boys’ varsity lacrosse team will look to secure another victory in their next game at Foothill High School on Saturday, March 3. at 3 p.m.