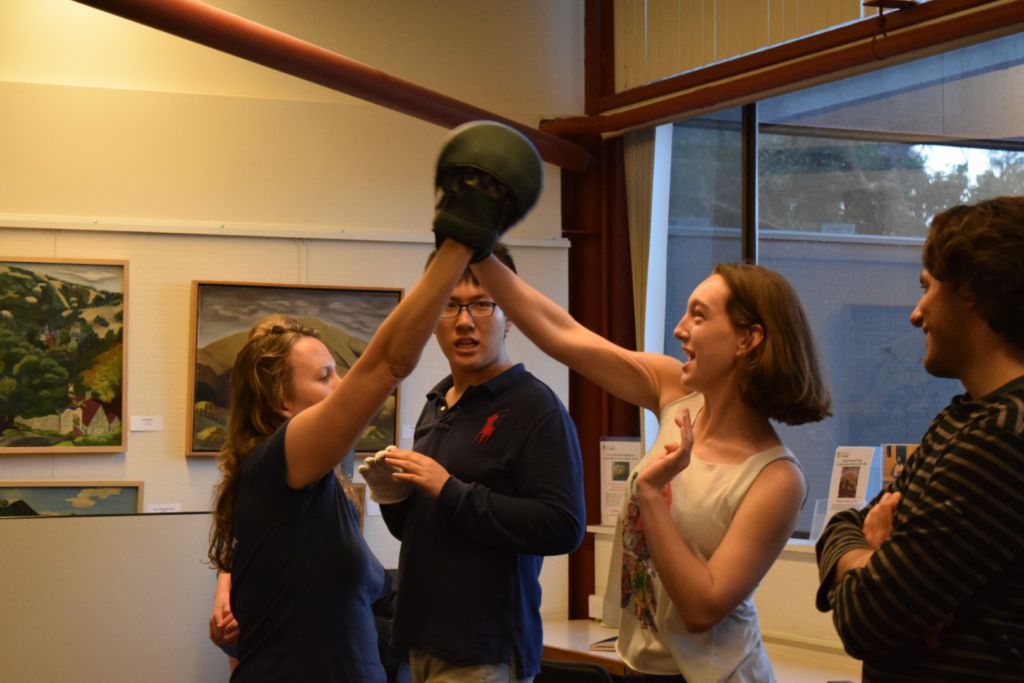 Thrusting her arm forward with full force, senior Clara Mckinley practices one of the self-defense moves taught at the Impact Bay Area workshop.

On Friday, Feb. 9, Impact Bay Area, a self-defense organization center in Oakland, hosted an hour-long introduction to self-defense at the Corte Madera Library. The event was attended by about 15 teenagers, who were taught the basic actions and steps to take if they find themselves in an unsafe situation.

According to librarian Sarah Butts, who manages the teen section at the Corte Madera Library, the Marin County Free Library system reached out to Impact Bay Area to hold self-defense classes in four different locations: Novato, Civic Center, West Marin, and Corte Madera. Easy access to self-defense information was part of the library’s goal in hosting this event.

“We’re all about the information here at the library, and so it’s giving people tools and for all different types of things and this is just one of the things that I felt [could be useful],” Butts said. “I am a parent of two teenage daughters, and it would be nice if my kids heard it from someone other than me.”

The class, instructed by Impact Bay Area worker Jemma Lester, focused on three crucial aspects of self-defense: learning how to avoid freezing in a scary situation, practicing skills “full force” and fighting from the ground. According to Lester, Impact Bay Area serves to prevent the traumatic after-effects that can arise from violence and harassment by providing people with tools to keep themselves safe.

“A lot of people experience, after taking classes, that they feel more free to live their life, do the things that matter to them and go places because they have some skills to back [themselves] up if they were to be in a compromising position,” Lester said.

According to senior Manuela Rosenfeld, who attended the self-defense class, while defense is briefly covered in P.E., there are not many resources for young people to learn how to protect themselves. Easy access to self-defense information was part of the library’s goal in hosting this event.

“I think that [self-defense is] not emphasized a lot and people think that [something dangerous is] not going to happen to them, but it unfortunately happens a lot more than we think it is, so just having those tools is really important,” Rosenfeld said.

Lester emphasized a similar point, saying that self-defense can be overlooked in Marin especially because of the safe environment.

“I think a lot of people don’t want to accept the realities of how dangerous [life] can be. Most attacks are through an acquaintance and it’s helpful to look at facts about these things when you decide whether or not it’s important for you to [learn about self-defense].”

According to Butts, learning even the few self-defense skills taught at the event can serve as a small arsenal to draw from if an unsafe situation were to occur.

“It means being able to go out into the world and not have fear and to have that confidence that you’re not going to have someone interfering with you. It just gives you a layer of ‘I’m in control,’ and being in control makes you free,” Butts said.