Let’s appreciate the Olympics as a time for cultural recognition 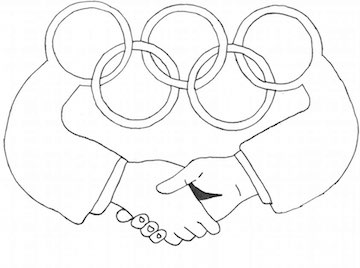 When the first Olympic Games were held in 776 B.C. in Olympia, Greece, the event was as much a religious celebration as it was an athletic competition. There was no running, jumping or throwing involved in the religious festival held to honor the Greek divinity. As the years passed, events were added to honor the Greek god Zeus, and each competition had a mythological origin and purpose. The games also inspired the establishment of an Olympic Truce, giving athletes the ability to travel safely through other hostile city states on their way to the games.

But as time progressed and the modern Olympic Games—meant to honor the ancient competition—began in 1896, the unifying goal of the Olympiad was lost. As countries begin to once again use the games to emphasize global unity, the Olympics are entering a new awakening, realizing their true objective. This shift in the purpose of the games deems it vital to view the Olympics, particularly through a political lens. The Olympics are no longer just an athletic contest, but a unique time for world reconciliation.

For decades, the modern Olympic Games held not much in common with its historical ancestor. Not only did the contest lose its religious significance, but the games no longer consisted of amateur participants. The athletes competing for their countries weren’t everyday people of the nation, but professionals whose primary goal was to place first on the podium.

The participants were not paying homage to their deities, but instead going to the extremes to win shiny, materialistic medals for themselves, and the involvement of endorsements and sponsorships monetized the event, deviating from the original intent of the Olympics.

Despite the extreme commercialization of the Olympics, we are entering a golden age of what the games mean for individual countries, continents and the entire world, as they have evolved into more than just an athletic event.

The competition now represents love, reconciliation and unity. Because countries are treating this years’ games as an opportunity to congregate peacefully and honor different cultures, viewers must recognize the event for what it truly is: a celebration of society through sport. Not only can the competition transform sports, it can also transform the world and its relationships. We may be in the modern age, but the Olympics of today have recaptured the true meaning for why the contest takes place.

For a period of time, the games were associated with scandals, conflict and hatred. In 1972, the Olympiad was home to the greatest Olympic performance of all time: Mark Spitz’s record of seven gold medals in one games. However, the historic contest was overshadowed by the hatred displayed by the Black September terrorist group, who held 11 Israeli national team members hostage and eventually slaughtered them, demanding that their Palestinian brethren be released from Western prisons.

Decades before, the 1936 Munich Games were funded by the Nazi regime. There, Adolf Hitler spewed his anti-Semitic message to the world while preventing Jews from participating in the events. Throughout the 20th century, the Olympics remained smudged by oppressive regimes, corrupt politics and conflict.

But today, the Olympics have become a platform to spread a message of compassion and showcase the host country’s culture to the world. In the past, Olympic opening and closing ceremonies consisted of primarily the host country’s leader giving a speech, the athlete introductions and the lighting of the Olympic torch. Now, in the new age of technology and the Olympiad, ceremonies utilize pyrotechnics, trapeze artistry, holographic images and projections to tell a captivating tale of the origin and heritage of the host country, giving the viewer a glimpse into what it is like to be from that nation. Providing insight into foreign culture gives viewers empathy and compassion for other cultures. Through watching the Olympics, people gain an in-depth understanding of foreign nations in the spirit of competition.

Even so, the games have recently experienced some of the similar and unfortunate trends that Olympiads before have showcased. Most recently, Russia has been involved with Olympic corruption, but the US has also has to deal with scandals that have cast a dark cloud over this year’s games. Russian athletes have been banned from this year’s games because of doping charges and their tireless efforts to evade drug testing. Also, on Jan. 24, the United States gymnastics trainer, Larry Nassar, was indicted for sexual abuse of over 150 women, many of which were gymnasts aspiring to compete for the U.S. National Team.

This year is the year for change. As showcased by recent host countries, a new era in the Olympics and hopefully world politics has been born. At this year’s games, taking place in Pyeongchang, South Korea, North and South Korea will march as one united team for the first time since 2004. This reconciliation due to the Olympics united the two countries for their first “high-level” talks in two years. Because of the games, North and South Korea were provided an opportunity to demonstrate their new efforts to lessen aggression towards each other. Due to this resolution, a path towards peace may finally be achieved between the two hostile countries.

Those who act like Nassar and the Russians are now part of a minority. As showcased by North and South Korea, the spirit of togetherness, respect and unity has proliferated the events once again, leaving a period of corruption in the Olympics’ past.

After the political turmoil, conflict and hostility that the world has suffered through this past year, we need an opportunity to celebrate our world’s cultures, and the Olympics provide just that. The athletes from North and South Korea may be the ones marching under a united flag in Pyeongchang, but the people of the world need to be the ones marching together under a single attitude of respect, togetherness and compassion.