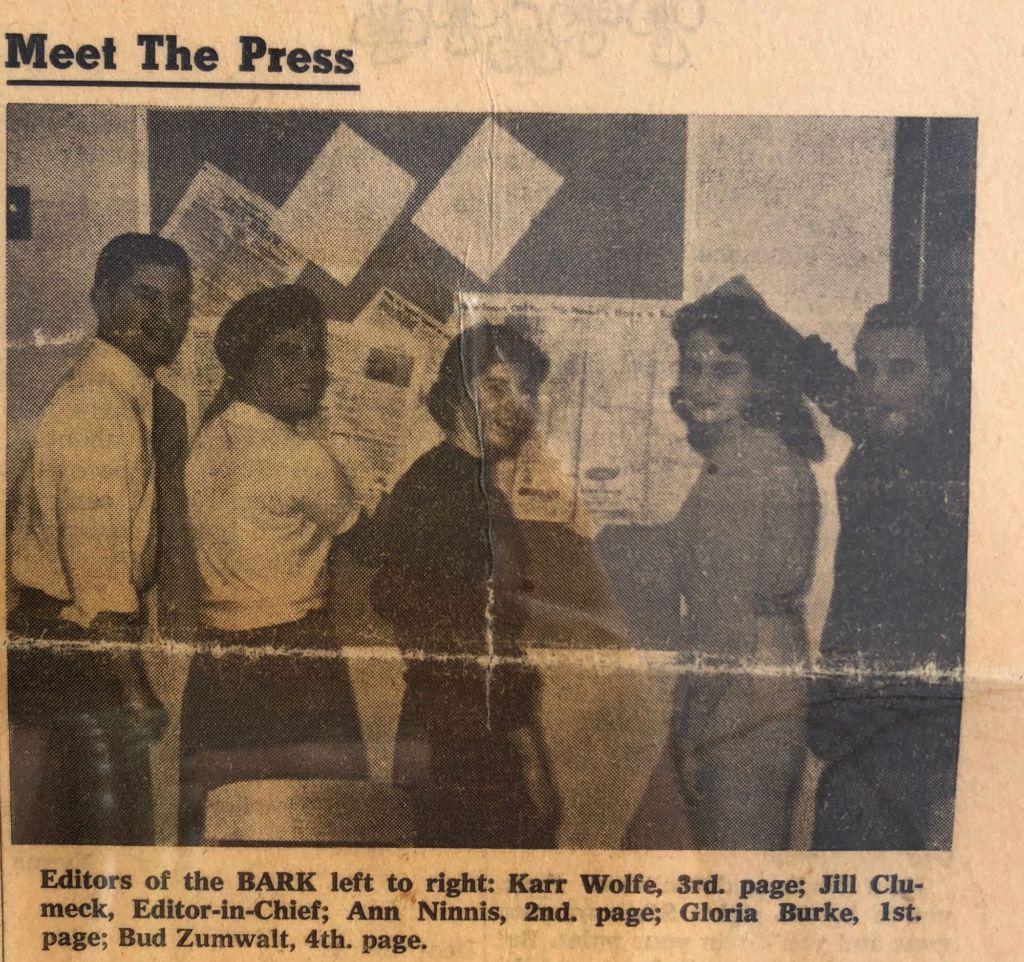 The Redwood Bark is celebrating its 60th anniversary in 2018! In honor of past news stories, we have chosen eight of some of the most dramatic and important news pieces from the first five years of Bark News.

Here is a interactive timeline summary of the article. 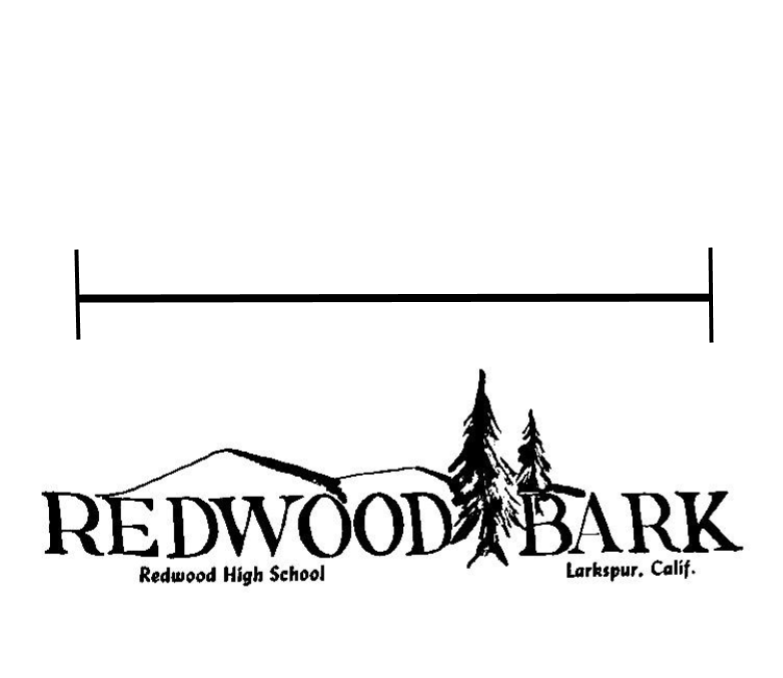 Built around a core Advanced Journalism class, the first ever Log and Bark staff surfaced eagerly, hoping to become involved in the school. The first class as a whole worked on publishing Redwood’s first newspaper and yearbook. During this time, over 100 students gathered together, spending time in and out of school working as staff members of the Bark and the Log. While a handful of students were in charge of picture identification for yearbook photos, others were responsible for selling yearbooks around school and helping out with reporting and writing juicy news stories for the Bark.

When the Tamalpais Union High School District school bond issue didn’t pass on a Tuesday in 1958, chaos broke out amongst students at Redwood. A school bond is generally issued by a local government, used to invest in and finance supplies and updates for school purposes. From this time in history and all the way until 2001, schools needed a majority of two-thirds to approve local bond measures from the district board. Unfortunately in 1958, the Tamalpais Union did not receive consent by representatives from local authority to approve the bond, dramatically affecting Redwood students.

“Freshman probably will be forced to continue sharing lockers; the halls will continue to resemble the morning commuter traffic on the Golden Gate Bridge; and Ruby Redwoodite will continue to drop her hot dog because she was bumped in the canteen line up,” a student reporter said.

As Redwood requested a $3 million bond, student capacity could have increased from its previous enrollment of 1,450 kids, which was already 200 students over the maximum capacity, to 2,400. Additionally, the school would have gained $1.9 million in order to follow through with their requests. Along with the increase of students, two new academic wings and an enlargement of the library would have been built as an improvement to the canteen and an expansion of the crowded parking lot. Students continually questioned the decision, all agreeing that the old cafeteria needed remodeling, the science rooms should be rebuilt to be up-to-par with lights and adequate sizing and new outdoor P.E. facilities should have been installed.

Attending Redwood for the fall semester of the 1960 school year, Redwood students returned with an earlier starting time for their first period of school. Through a new schedule change, school began 25 minutes earlier than the previous semesters. The 25-minute earlier arrival time allowed for a scheduled break in the early morning and additionally a welcome 15-minute earlier dismissal in the afternoon.

This new time schedule was planned to begin during second semester since students with a pre-period would have to come even earlier to school. These students would have to come earlier since regular school starts earlier, pushing their pre-period an hour before the earlier starting time. Luckily, the students with a pre-period schedule had time to try and change their schedules so they could come to school at the new time, though it was hard to do without disturbing their present schedule.

On Saturday, Nov. 19, 1960, the second annual Student Leaders Conference was held at Redwood. Suggested by Inter-School Relations Association, this Student Leaders Conference was held with an intent to improve the relations of Marin high schools. Prior to this meeting, the first conference occurred at Novato High School, which served as a first run. After the first meeting, it became clear to the conference leaders that the meeting was a great aid for specific schools who had problems with school activities. Six of the seven schools in the Marin Athletic League (Drake, San Rafael, Novato, Tamalpais, Marin Catholic, Redwood) all showed interest in attending the conference. But the seventh school, Terra Linda, being brand new, wasn’t able to attend until further meetings. Seven successful workshops were presented within hour-and-a-half sessions. The workshops included finance, public relations, judicial and student control, constitution, rallies and assemblies, newspaper, shop and yearbook. Additionally, the presidents of the respected student bodies joined together to run their own separate workshop. Each representative from the Tam district schools presented their school’s own individual ideas and opinions regarding the topics at hand.

“Exclusively for the pleasure of Redwood students and faculty is a ‘spectacular’ rally to be presented by the program committee,” said a student reporter.

During the winter break of 1960, Redwood Giants made sure to get into the holiday spirit. As it was a new year for Redwood’s Christmas programs, the evening of Dec. 15 was set as a provisional date for a variety show and music presentation in the main gym. The vice president of the student body served as the so called “Master of Ceremonies” for the planned 30 minutes of performances from talented Redwoodites. Ranging from skits to songs, many Redwood students entertained the crowd as crewmen sung folksongs and ballads. Student musicians accompanied each other’s voices as trios presented their new songs. A two-person skit of  “Frosty, the Snowman” was performed in front of the school. After the first 30-minute half came to an end, Redwood’s Glee Club and Chorus belted out their new songs as the orchestra  played Christmas music in the background.

On their first of four scheduled ski trips, Redwood’s Ski Club headed for the chilly hills of Yosemite during the winter sport season. Regardless of skiing ability or experience, any student eager to hit the slopes was eligible to sign up for their winter trips. Although the club members retained priority of the 38 seats on the Greyhound bus, the club planned on taking treks to Yosemite, Echo Summit, Donner Summit and Squaw Valley.

“The Club president has initiated a ‘pay-as-you-go’ policy, which ‘eliminated financial errors,’ whereby a skier deposits the total cost of the trip ($22-30) with his sign up. The prospective schusser then attends three of four dry land ski lessons [before going to the snow], which develop both physical and safety skills, and agrees to abide by a Ski Club Code of Ethics before climbing onto the bus,” said a student reporter.

Afterwards, the student would ride the team bus and hit the slopes in Yosemite. Although the club wasn’t officially recognized by Redwood High School, they still took part in many competitive events, including San Rafael Sporting Goods Championships at Heavenly Valley, MCAL competitions, and Redwood’s own race held at Squaw Valley in March of 1961.

Sponsored by the Parent Teacher Association , “Melody in Fashion,” Redwood’s annual spring fashion show, brought the warm feeling of spring-like weather into the Redwood gym. As the theme revolved around spring and summer, teen fashions, corresponding to the seasons, were shown by the H. Liebes Department Store of San Francisco. Two head members from The Mannequin League of Marin chose the chosen Redwood girls to model. “From 175 attractive girls, the league members had to select 20. Sixty-five of the girls who tried out were from the freshman class.” All proceeds from the show went to providing robes for the Redwood choir.

As student participation in school activities decreased in the year of 1961, Jeff Dippel (Head of Finance Committee) and his Finance Committee of Redwood experienced some problems while developing Redwood’s budget. Since the whole committee was built upon a certain budget, each student organization was supposed to give an estimate of how much money they needed for the year. Thereafter, the finance committee estimated the total budget and how much they would eventually gain from each organization. Since student participation in school wide events continued to decrease, the estimates of the receipts ended up being too pricey. Student body cards (purchasing an ASB sticker on student ID, in order to receive discount on school events) were bought by less than half of the student body, attendance at the football games was very low (according to proceeds from the games), and Redwood dances had poor turnouts as well.

Looking back at Redwood’s past, it’s evident that there are both similarities and differences to how the school is now. The crowded halls and enthusiastic skiers represent some of Redwood’s long-established characteristics. However, other aspects, such as student spirit, have come a long way. Although student spirit wasn’t very uplifting in 1961, Redwood students managed to pick it up throughout the years. We look back at 1961—and other prior years—as a reminder to current students that together everyone at Redwood is a family, and as a family we believe in one another and strive for our school. Together we are Giant!