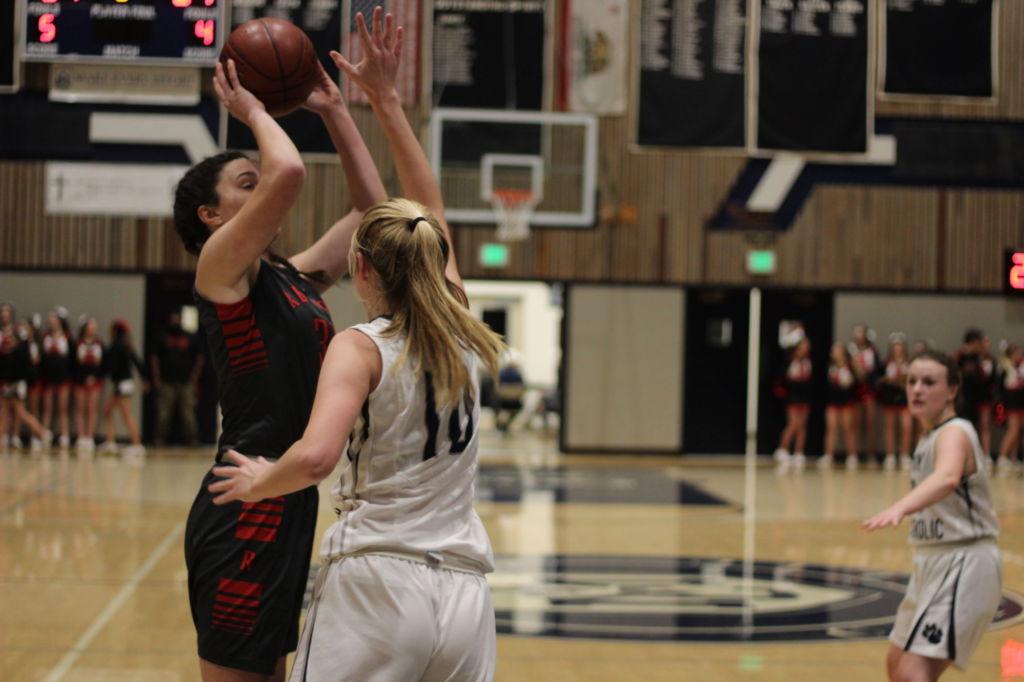 Julia Guisti rises and shoots over a MC defender

With Redwood leading 23-22 at half time, it seemed as if the rivalry game against Marin Catholic (MC) would be a a nail-biter to the final buzzer. However, after having halftime to recuperate, Redwood’s girls basketball pulled away thanks to stout team defense and offensive dominance by junior Jenny Walker. In the end Redwood handily beat MC 62-44 and maintained their perfect MCAL record.

Redwood’s coach Diane Peterson believed that Redwood’s success late in the game was a direct result of a strong, persistent defense and the ability to notice and exploit positional mismatches. Above everything else, Peterson claims that the team’s depth helps them adapt and overcome challenges in situations like Thursday night.

“We have outstanding players throughout the bench from our starters to the players coming off the bench,” Peterson said. “This is by far the most talented team that we have ever had.”

Coming into Thursday’s game, the Giants (10-0) and the Wildcats (10-1) held the top two spots MCALs. Marin Catholic’s only previous MCAL loss was to Redwood when they fell 64-47 in their first meeting.

After the loss, Marin Catholic’s coach, Ashley Saia, acknowledged Redwood’s talent and the challenge that they bring to each game.

“Redwood is a really good team. That’s why they’re undefeated and number one in the league,” Saia said. “They are very well coached and I’m always excited to get to step on the floor with them.”

Without a doubt, the star of the game was Walker who finished with 27 points, totaling to more than 40 percent of Redwood’s total points in the game. Although she was satisfied with her season high in scoring, Walker is eager for the next challenge.

“We will never stay satisfied. I’m happy we won tonight but that’s not all I want. I want to win MCALS and so much more. We just have to keep our goals in front of us because being complacent is just not going to work for us,” Walker said.

Redwood looks to maintain their perfect record against San Marin on Saturday, Feb. 3, at home.