Students build connections through ‘Breaking Down the Walls’ workshop 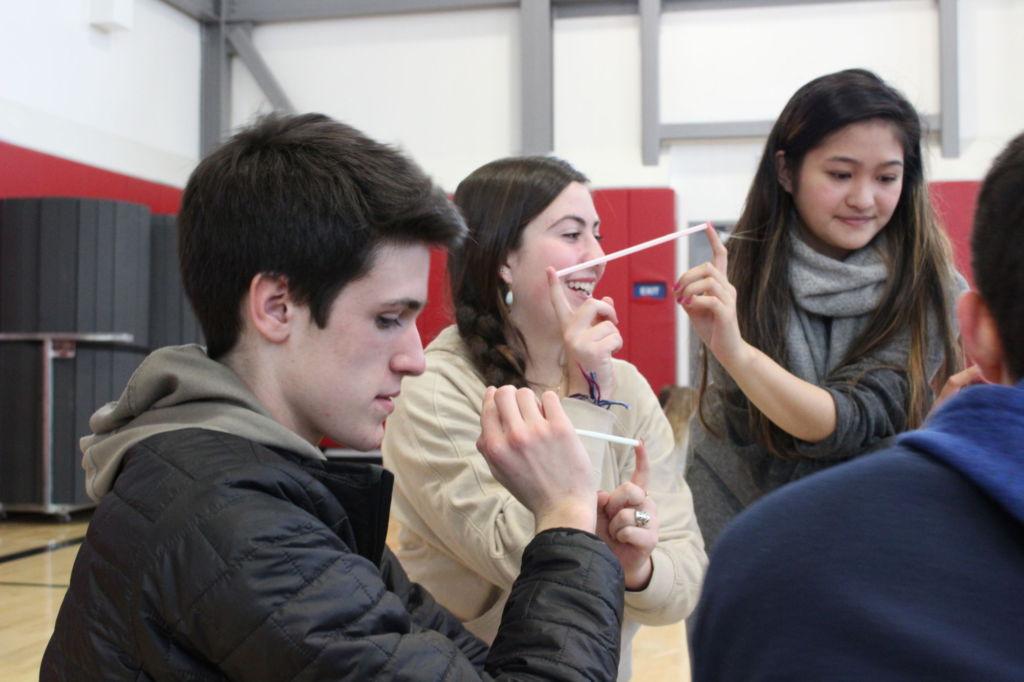 On Tuesday, Jan. 22, Link Crew hosted the Breaking Down the Walls workshop in the small gym for a select group of students who were nominated by their advisory teachers for demonstrating leadership potential.

The workshop was led by youth speaker Freddie Silveria, a representative from the Learning for Living organization. The organization leads workshops and assemblies on school campuses across the country to cultivate interactive communities through supportive interpersonal relationships amongst student bodies. Approximately 100 students attended the workshop, which spanned the entire school day.

Link Crew teacher leaders Erik Berkowitz and Katie Slattery planned on hosting this event in early September to set the tone for the advisory classrooms. The workshop was postponed until January due to some resistance about the student selection process.

“Our original idea was to do the workshop in early September so that we had students from each advisory participating to help create a stronger community among each advisory,” Slattery said.

Berkowitz and Slattery wanted the event to impact students in a way that would influence them to be comfortable starting relationships with new faces in their advisory classes and, more importantly, in their everyday lives.

Silveria noted that the goal of Breaking Down the Walls is to cultivate a safe social climate where all students can interact to build a thriving community.

“Ultimately, it’s how do we take what we’ve learned from this experience and then influence the rest of the campus on how to be a better place,” Silveria said.

During the workshop, Principal David Sondheim made a brief appearance to answer questions from the participating students.

Overall, students reacted positively to the event. Junior Link Crew leader Nicole Notter said that she was initially unmotivated to be a student leader for the workshop. However, she noted that the workshop ended up being a fun and impactful experience.

“I didn’t realize how much I assumed things about other people,” Notter said. “It really opened my eyes to what people experience and go through.”

Notter said that her favorite event from the workshop was a game called “Cross The Line,” where students would step forward if a certain statement applied to them and stay behind the line if it didn’t or if they wished not to answer. Whereas some statements were lighthearted, many revolved around sensitive subjects such as abuse, mental health, loss and insecurity. Several  students let their guard down and crossed the line when asked to identify with difficult statements.

“I didn’t realize how many people went through such hard things [in life],” Notter said.

“[Going forward], I’m going to try and expand my friend group because I am always hanging out with the same people,” Promitcher said. “I’m meeting new people, and a lot of the people I have met I wouldn’t talk to normally.”

“Being in the [Redwood] community, there are a lot of circles and a lot of cliques. I’m a transfer student from last year, so it’s hard getting into the cliques,” McKenna said.

McKenna noted that the workshop’s games and activities were a surprise to her, as she originally thought the workshop was going to be run like a seminar.

“I like that everyone is talking and that we have time to get to know one another better,” McKenna said.

Junior Robert Buchanan said that understanding others’ stories and what they go through will positively influence him moving forward.

“I feel like I can take the skills that I’ve learned and translate them into my life,” Buchanan said.

Berkowitz hopes that this experience will foster interpersonal connections between students who may have never met each other without a structured opportunity.

“My sense is that there is a yearning for students to meet new people and yet there is not an easy way to do that,” Berkowitz said. “And sometimes you actually need forced situations in order to meet someone new. If you are open to it, you might end up meeting one of your best friends or at least someone that you can rely on in the future.”

Slattery stated that another workshop opportunity may be available for students in the future depending on the responses from students who took a survey after the workshop.