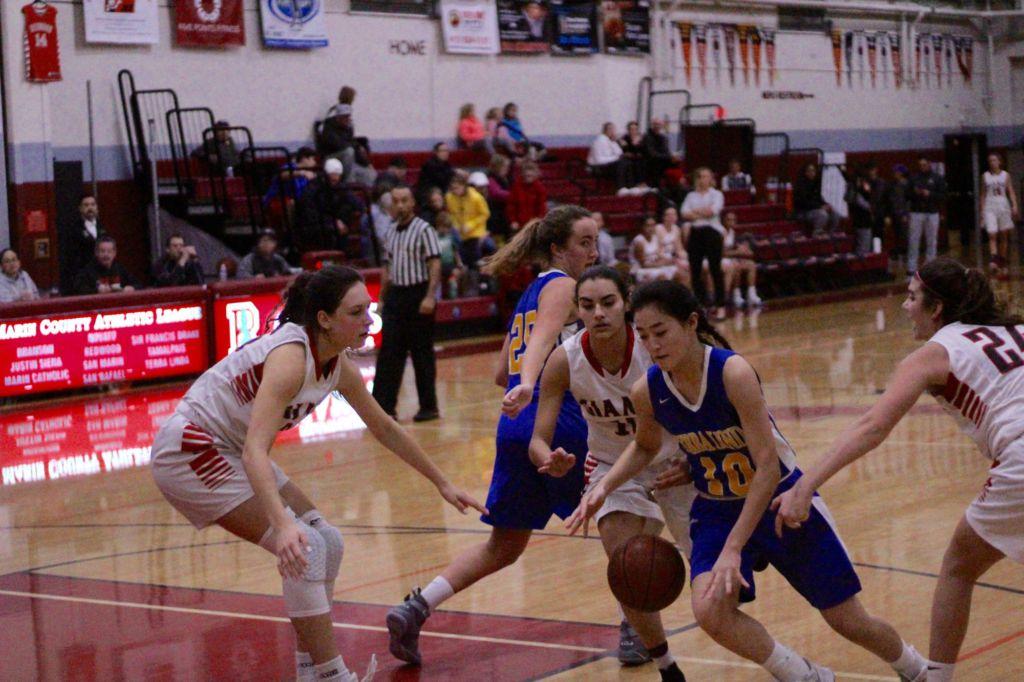 The girls’ varsity basketball squad (5-0 in MCAL) prevailed during Saturday night’s matchup against Terra Linda (2-3 in MCAL), beating them 74-26. This win changes their record to 13 wins and three losses and secures the team the first place spot in MCALs.

Though the girls were able to hold the Trojans to only 26 points, their success on the offensive front was what differentiated them from the opponent, according to head coach Diane Peterson. Many of the points were scored due to the quick transition offense, enabling for lightning-fast breaks.

“Going forward, we definitely need to work on our team defense, which is something that can be addressed in practice. We also need to work on fouling less,” Peterson said.

Despite being the youngest player on the team, Horstmeyer scored 15 points, which led the team Saturday night. Both Stachowski and Walker scored 14 points.

Offensively, Redwood was able to move the ball around the court easily, according to both Peterson and Stachowski.

“On offense, our passing was really good, but our overall performance on defe

nse is something that we need to continue to work on,” Stachowski said.

Although defense appeared strong during the game (the Trojans were held to 5 points in the third quarter), the team racked up a hefty amount of fouls; by the end of the game, Redwood fouled 15 times.

Having that many fouls can be costly against tougher opponents, according to Horstmeyer.

“We will definitely address man-to-man defense in practice, because [15 fouls] is a lot of fouls,” Horstmeyer said.

Standing at first place in MCALs, the Giants look strong heading into the remaining 13 games of the season.

“We have a lot of good players this year, so I think MCAL will be a breeze. We should set our goals on NCS this year,” Stachowski said.

Redwood’s next game is at home on Jan. 16 against Tamalpais. Considering that Tam beat Redwood in the 2017 MCAL championship, this will be a deciding factor on what the MCAL climate will be this year.