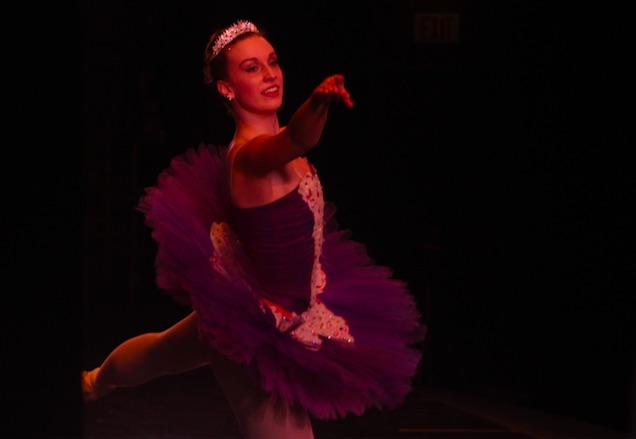 Stapleton School of the Performing Arts’ production of “The Nutcracker” was showed for its 29th consecutive year at the Marin Veterans’ Memorial Auditorium from Nov. 29 through Dec. 3. The timeless performance was showcased six times throughout the weekend.

The performance featured several Redwood students including junior Delilah Mittermaier, who took on the roles of the Arabian lead and a member of the Snow Trio. Mittermaier has been dancing since she was in the first grade and describes the adrenaline that comes with performing as why she loves to dance.

“Once you get on stage, it doesn’t really matter if your foot is hurting or if you’re pissed off at somebody. You kind of just forget about everything and it’s all about you for a second,” Mittermaier said. “I was nervous up until I got up on stage and it all just fell away.”

Mittermaier’s role included working with a partner, which she said was her favorite part of being the Arabian lead. According to Mittermaier, Stapleton hadn’t exposed her much to partner work until this year.

“We dance together but it’s not the same as having a partner and having to work with each other,” Mittermaier said.

Senior Lauren Roberts had the main role of the performance as the Sugar Plum Fairy. Roberts suffered an injury during the season and initially wasn’t sure if she would be able to perform, but she successfully danced all six shows, and said that it was a success.

“[Sugar Plum Fairy] was a lot of commitment and a lot of hard work. And a lot of expectations, because you are the queen of the whole Nutcracker,” Roberts said. “It was definitely a frustrating process because of course I wanted to be perfect and I wanted to be as I good as I possibly could be, but it set me back for a couple of weeks. But I pushed through, and I think that was very uplifting.”

Roberts said that her highlight of the weekend was the post-mattene meet and greet, where young audience members and dancers could talk to the lead dancers, as well as take photos with them.

“This one girl slowly shuffled up to me and got inches away from my face, stared at me for a couple seconds, and whispered, ‘I love you.’ And that was the most amazing feeling I think I’ve ever experienced. I really noticed how much of an impact we are on these children, and how much of an inspiration we are,” Roberts said.

Junior Kaitlin McGrath also had a prominent part in Stapleton’s “The Nutcracker” production this year as the Rose Queen lead. Additionally, she danced as part of the Snow Trio. McGrath, who has been dancing since she was two, takes four classes a week in addition to rehearsals.

McGrath described her love for the Stapleton community. The bond between the sophomores, juniors and seniors was built up through the extensive amount of time they’d spent together throughout their dance careers.

“It comes with all the classes and the rehearsals we’ve spent together, so it’s like we’re a little family,” McGrath said.

Beyond the tight-knit community of Stapleton, both Mittermaier and McGrath mentioned some of the struggles of performing.

“There are always parts of dances that can be super tricky. Like for me there’s this turn that I’m always worrying about hitting. There are certain things in dance that are hard for some people and easier for some others. So it really depends dancer to dancer what’s hard for you,” McGrath said.

Founder and Artistic Director Virginia Stapleton has been inspiring students to dance for around 35 years, and founded the Stapleton School of Performing Arts 30 years ago. Following her professional dance career with the San Francisco Ballet, Stapleton began teaching youth classes at a Marin recreational renter, and later founded her well-respected company.

Her company started with just 20 students, and according to Stapleton, her first year was very difficult. Now 30 years later, she has perfected the organizing and teaching of the now approximately 280 students enrolled at the performing arts school.

“It’s been a constant work in progress. Every year we try to hone in a little more on how we are going to present this so they can be a professional if they want to or not,” Stapleton said.

The Stapleton company has been performing “The Nutcracker” since its founding. Stapleton said that at this point students expect “The Nutcracker” to be practiced, and look forward to improving their roles in the show each year. However, each year comes with changes to enhance performances.

“Over the years it’s become much more sophisticated. We started out with paper sets at Drake High School; it was very primitive. And then as the years have gone we’ve gotten a professional house here, with professional technicians and professional set designers and costume designers,” Stapleton said.

Stapleton has also worked to improve the dance itself by tightening up choreography and shifting her teaching techniques to become more sophisticated.

However, this year was untraditionally hectic, as the Stapleton School of Performing Arts has been attempting to move into a new building since September. The transition was sparked by Stapleton’s need for a larger space to maintain cohesiveness with her faculty.

That setback didn’t deter Stapleton or her dancers from performing with beauty and grace.

“I love being a part of these young people and seeing the different aspirations they bring to it. That’s really exciting to me. It keeps me vital, it keeps me continuing to work and I’ll probably continue to do it for quite a little while,” Stapleton said. “I never knew 30 years ago that this would be my life for the Christmas season.”