Who will be crowned champion of College Football? 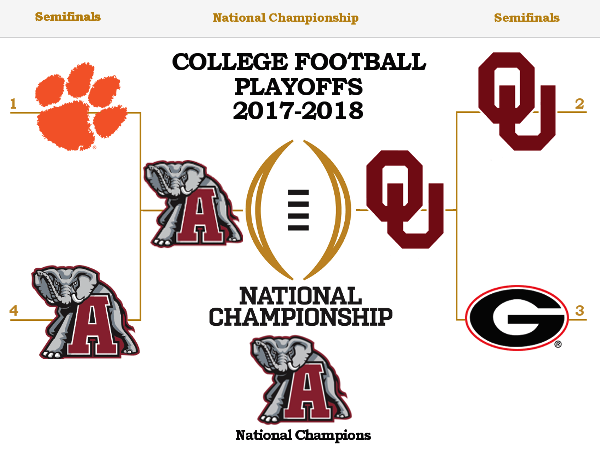 Without a doubt, this year’s college football season has been entertaining to watch. From the high-flying hurdles of Penn State’s Saquon Barkley and the spectacular scrambles of Louisville’s Lamar Jackson, to the thunderous touchdown throws made by Heisman Trophy winner Baker Mayfield from Oklahoma, this college football season has been one of the most electrifying to date.

Not only that, but it has been historic as well. For the first time in the four-year history of the College Football Playoff, the selection committee has accepted two teams from the same conference, Alabama and Georgia, both from the Southeastern Conference. This year’s selection was incredibly controversial among fans. Many believed that eighth-ranked Ohio State, after beating undefeated fourth-ranked Wisconsin in the Big 10 Championship game, deserved to be in the playoff over Alabama, who lost to Auburn in their final regular season game and failed to make it to the SEC Championship Game. However Ohio State’s 24-55 loss to Iowa from earlier in the season demolished their chances of making it into the playoff. With that, the College Football Playoff selections were sealed.

On New Year’s Day, top-ranked Clemson will take on fourth-ranked Alabama in the Sugar Bowl, while second-ranked Oklahoma will take on third-ranked Georgia in the Rose Bowl. The winners of the two games play each other on Jan. 7 in the National Championship game. After watching countless hours of college football every Saturday, I’ve made some educated predictions for how the tournament will play out.

For the third straight year, the fierce rivalry between Clemson and Alabama will be put on display in the College Football Playoff. But, there will be a slight difference this year. Instead of the two teams meeting to play for the National Championship, which Alabama won in 2015 and Clemson won in 2016, the two will meet in the first round of the playoffs, with the winner going on to play for the ultimate honor in college football—winning a national title.

The two teams are led by their ferocious defenses. Alabama, led by junior defensive back Minkah Fitzpatrick, has the number one ranked defense in the country, holding their opponents to an average of just 258 yards of total offense a game. Clemson, headed by a monstrous defensive line, leads all FBS teams in sacks and points off turnovers this season.

Both teams have potent offenses as well. True freshman quarterback Kelly Bryant leads the Clemson offense, who is one of the nation’s leaders in completion percentage and an imposing dual threat in the back field, rushing for eleven touchdowns on the season as well. As for Alabama, their dynamic backfield runs their powerful offensive attack. Running backs Bo Scarbrough and Damien Harris lead the 11th-ranked rushing offense in the nation, while sophomore quarterback Jalen Hurts has thrown and ran for a combined total of 23 touchdowns this season.

But what this matchup comes down to is less about what skills both teams possess, but more about the players’ experience. Although both teams return the same amount of starters from last year’s teams, Alabama has the upper hand in that category, as they return crucial players like Scarborough, Hurts, Harris, Fitzpatrick and wide receiver Calvin Ridley. Clemson has lost many crucial players from last year’s championship team, such as quarterback Deshaun Watson, wide receiver Mike Williams and running back Wayne Gallman, and has replaced them with players who are not as experienced at competing on the national stage. Because of this, Alabama will win, but the game will be close. Final Score: 14-21.

This matchup features two incredible offenses. Georgia is led by the two-headed monster of a backfield—seniors Nick Chubb and Sony Michel have combined for over 2,000 rushing yards and 26 touchdowns. But even with their success in running the ball, the Bulldogs have had a turbulent time with their quarterback situation. Georgia began their season with returning starter sophomore Jacob Eason, but in their first game against Appalachian State, he suffered a knee injury and was out for the next few games. The team then turned to true freshman Jake Fromm to lead the team for the rest of the season, where they finished with only one loss against 10th-ranked Auburn.

Oklahoma, on the other hand, is led by the Heisman trophy winner Baker Mayfield, who has thrown for over 4,000 yards this season and combined for 46 touchdowns through the air and on the ground. Mayfield, a senior, started his career as a walk-on at Texas Tech, but then transferred to Oklahoma and has been the starter since 2015. Mayfield leads the number one offense in the country that averages over 350 yards a game. Even though Georgia has the fourth-ranked defense in the country, look for Mayfield’s experience and poise to shine in the bright lights of Los Angeles. Final Score: 35-14

Both teams will be coming off major morale boosters with their wins over two of the best teams in country. But now, the big lights turn on and the real competitors come out. And when this happens, experience really comes into play. Although Mayfield has started the last three seasons for Oklahoma University (OU), he has yet to play in a bowl game of this caliber. In his first year, the Sooners played in the Orange Bowl in the playoff, and were demolished by Clemson, getting outscored by 20 points. Last year, OU played 22nd-ranked Auburn in the Sugar Bowl, where OU destroyed them, winning 35-19. In Mayfield’s career, he has yet to win a postseason game versus a top 20 team, and the rest of his team is in a similar situation.

But the inexperience doesn’t stop there. This year, Oklahoma has a new head coach, Lincoln Riley, who has never been a head coach of a college team before. Riley is currently the youngest head coach in the NCAA at 33 years old, and has yet to head coach a collegiate bowl game. This inexperience comes as a major contrast to Alabama’s head coach, Nick Saban. Saban has won four national championships out of the five Alabama has appeared in during his tenure. Saban is also one of three active Division I coaches with over two hundred wins, along with William and Mary’s Jimmye Laycock and Kansas State’s Bill Snyder. With a win this year, Saban will also become tied for the most NCAA football championships of all time. Saban also has a quarterback in Hurts who has national championship experience, and after losing to Clemson last year, he will be hungry for redemption. Hurts is also one of the most decisive and mistake-free quarterbacks in the country. Hurts has only thrown one interception all season, and in a game where every possession counts, not turning over the ball is key. Because of these reasons, look for Alabama to win their sixth national championship in 10 years. Final Score: 42-28. 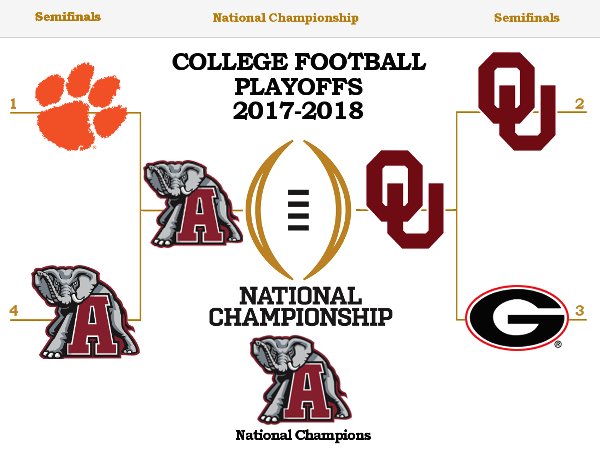