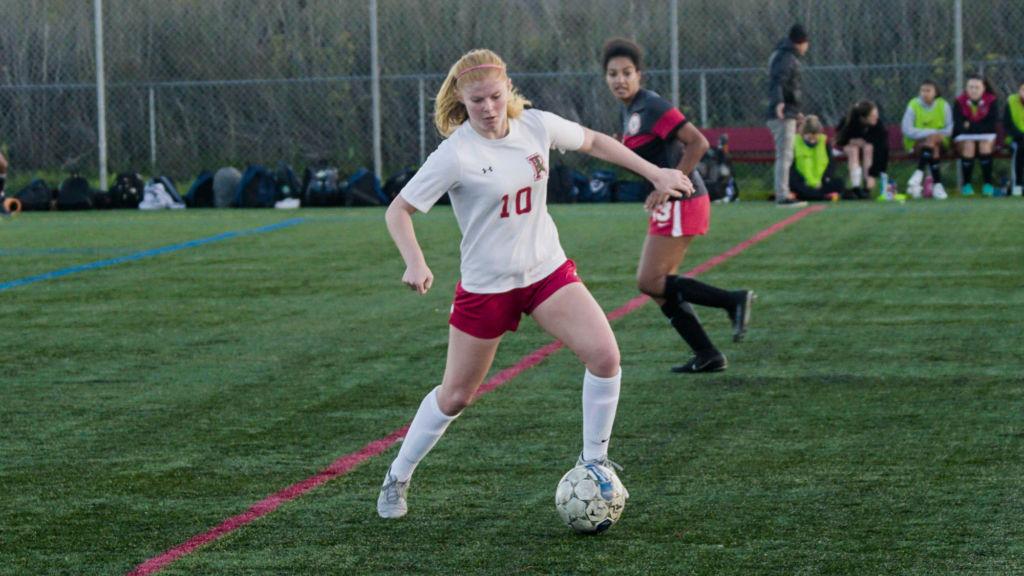 On Tuesday afternoon, girls’ varsity soccer took to the field for their first game of the season against Marin Academy (MA). Redwood came out with a rocky start in the first 15 minutes, as MA supplied plenty of offensive pressure. However, after a diving save from junior goalie Sam Ferguson, the girls rallied. Sophomore Grace Bouton scored two goals in the first half and junior Maddie Pero followed with a third to bring Redwood an early lead.

“Our keeper came out with a big save when it was zero-zero,” said Coach Mattias Kodzoman. “If they scored there, there might have been a different outlook on the game, but once we got the first goal, we became pretty comfortable.”

During the second half of the game, MA scored one goal and Redwood returned with two more points: a goal from senior Stella Campodonico and an own-goal from MA to put the nail in the coffin.

Campodonico, one of the four team captains, looks forward to an MCAL championship.

“Winning MCALs would be nice because it’s been four years. The Redwood team won MCALs the year before I came, so that would be nice if we could win. I think we are definitely capable, our team is supposed to be really good.”

Kodzoman also hopes to receive a banner at the end of the season.

“Last year, we were not successful getting one of those banners. We want to get a banner for sure. If that’s going to be in MCALs or NCS, if we make it there, we are going to take either one,” Kodzoman said.

According to Campodonico, her goal as captain this season is to help the team bond in a way that they couldn’t the previous year.

“Something that we want to do differently this year is have better team chemistry. Last year, we had a lot of issues both on and off the field trying to gel and trying to keep calm during games, and there was a lot of tension,” Campodonico said. “We’re trying to bond as much as possible and lower the hype, kind of relax.”

Both the players and the coaches have areas they would like to see improvements in. Sophomore Sophia Curtaz believes that the team should work on streamlining their possession, and Kodzoman wants to strengthen their defense.

“Like I told the kids, we are always going to score in our games because we are so good going forward, we just have to defend really well,” Kodzoman said.

Redwood’s next game is today at home against Casa Grande.