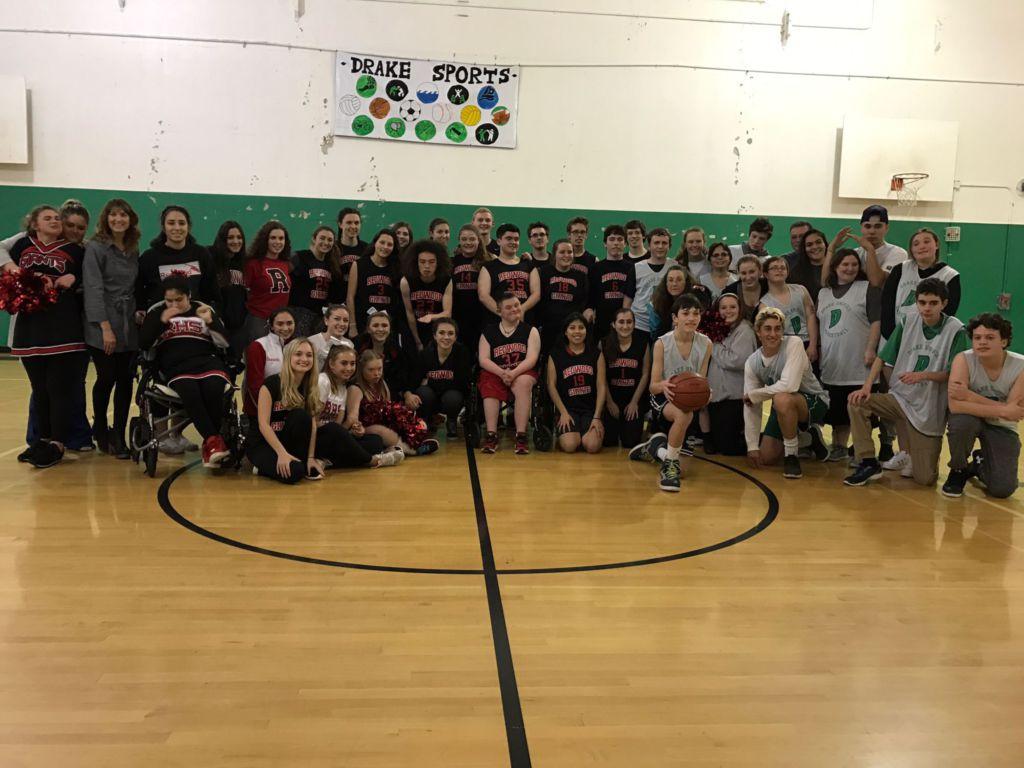 For the second year in a row, the Special Olympic Club’s coed Unified basketball team will return to the court in hopes of developing stronger team chemistry while also improving basketball skills. This program gives students who normally would not be able to participate in regular season sports the chance to be a part of a team and pursue their love for basketball.

The goal of the program is to put a smile on unified students’ faces who have had to struggle with both physical and mental disabilities, according to 2nd year club president Annie Connors.

Senior Cami Klemme, one of the co-presidents of the Special Olympics Club, joined the program after going to one club meeting during her freshman year. As president, she plans meetings, organizes fundraisers and coordinates games. According to Klemme, she fell in love with the welcoming atmosphere of the community and kind students.

“Altogether, supporting each other and having a great season is our goal. It does not matter if we win or lose, we just want to give kids the opportunity to participate in the basketball team,” Klemme said. “It puts a smile on everyone’s face and it’s an amazing experience for every participant, whether they’re cheering on the side or playing on the court.”

The Special Olympics Club has been around for four years. Now run by Klemme and Connors, the club gives Unified students the opportunity to be a part of the Redwood community. Through the past two years of running the club, they have implemented new sports programs such as basketball and track.

This year, the team will have 15 players. They have a total of four games as well as a tournament to start off their season in January. The Unified league includes teams from Terra Linda, San Marin, Drake, Grant Grover and San Rafael.

The team practices weekly during lunch, where they work on dribbling, shooting, passing and other basketball skills lead by club members and volunteers. As the start of the season approaches, they will have practices during SMART period as well.

“I’d say our team is going to be all around really strong this year because we have a bunch of new players. We have three new students in room 175 that want to participate on the basketball team so I think that will make us stronger and add to our competitiveness,” Klemme said.

According to Connors, they are hoping to spread significantly more awareness of the season throughout the Redwood community. One of the club’s goals is to have as much participation as possible, not only from Unified students but also Redwood students. They will be making announcements on Redwood TV, hanging posters throughout the campus and playing a game in the next rally.

“I love being able to create programs like this where it involves so much collaboration and brings social change to our campus by students working together in new and creative ways. Pairing that with physical activity, such as basketball, really creates something special,” Peter said.

Peter has been teaching the special education class for the past eight years. According to Peter, the creation of the team has been a group effort. Athletic Director Jessica Peisch and physical education teacher Mike Dibley both contributed to making the program possible. Dibley has refereed every Unified game that has taken place at Redwood.

“When you look at [a] softball team or volleyball team while they’re playing, everyone has different cheers. I want to bring that aspect of fun to this team. When someone shoots a basket—whoever that is—everyone has a [specific] cheer for them,” Peter said.

With a well-rounded group of students, they plan to accomplish their goals for the season.

“I’m looking forward to seeing them improve and form a new team dynamic through every practice and game this season. I think that the most important part is the students building relationships with one another and having fun,” Connors said.

The team’s first game is the jamboree tournament at Redwood on Jan. 26. They will be playing both Grant Grover and San Marin in the big gym. The first game of the tournament, Drake versus Tam, begins at 2:30 p.m. The team meets every Wednesday during lunch in the small gym.