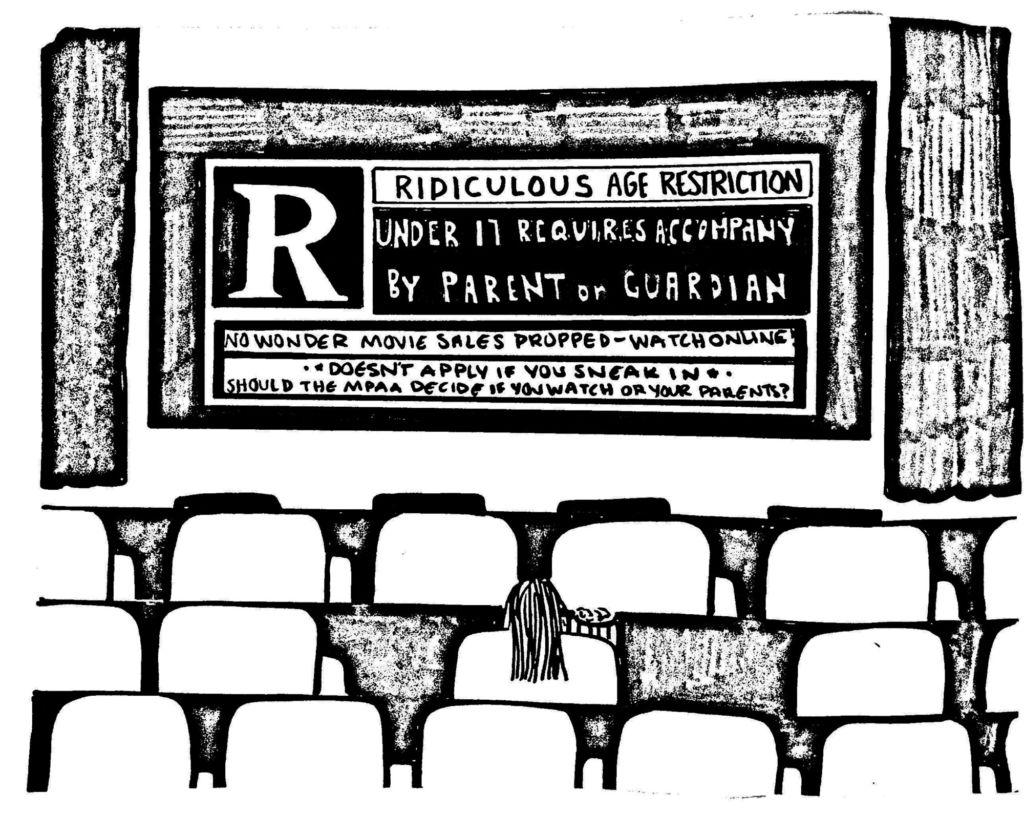 Months in advance, you hear about an exciting new movie, and you can’t wait to see it.. A couple of weeks later, the trailer is released. You watch it again and again, becoming even more anxious to see the complete film. A few more weeks pass by and finally the day has come, the movie is out in theaters. However, all of that packaged excitement comes to an abrupt stop when you’re denied entrance to the theater simply because of your age. The film is rated R. But, if the age limit for rated R movies was lowered to at least a more reasonable age of 14, then students would be able to see a movie they are enthusiastic about.

In the U.S., the Motion Picture Association of America (MPAA) classifies the different ratings for movies through the Classification and Rating Administration (CARA). According to CARA, people under the age of 17 are legally not permitted to watch R-rated movies alone, due to adult themes, adult activity, hard language, intense or persistent violence, sexually-oriented nudity, drug abuse or other mature elements. A parent or guardian must accompany them, making it inconvenient for many teenagers to attend a movie since they are restricted from seeing the one they want. Should it be up to a government-run organization to determine what children and teens are watching in America? No, it should be up to the parent and child to decide what a minor is allowed and isn’t allowed to watch.

Many teens are permitted to watch R-rated movies at a young age. Researchers from Dartmouth Medical School estimate more than 2.5 million children aged 10 to 14 watch typical violent, R-rated movies. According to a recent Bark survey, 65 percent of students under the age of 17 claim they are given permission by a parent or guardian to watch an R-rated movie, and only 9 percent who are under 17 are not allowed permission from their parent or guardian. If a child is 14 and can handle the exposure of an R-rated movie, then that kid should be able to watch that movie. The parent should be the one responsible for what their child watches as they would have a better idea of what their kid can handle. An easy compromise would be allowing kids to bring permission slips signed by parents giving their child permission to see a certain movie, or even a digital waiver that the movie theater has on file for each individual person. To avoid forgery, the parent must provide proof or I.D. when signing a waiver. As theaters allow kids to watch R-rated films with the accompaniment of their parent or guardian, then why can’t the parent give vocal or written consent for their child?

Furthermore, in today’s culture, modern teens are exposed to R-rated content in their everyday lives. Whether that’s swearing, violence on news or sexual contact, teenagers are not strangers to the content in R-rated movies. A Pew Research Center survey reported that 95 percent of U.S. young adults between the ages of 12 through 17 explore online and 80 percent of them have seen R-rated content on their timeline at different points in their lives. Some of the content kids are exploring online includes TV shows and YouTube videos exposing violent images, nudity and swear words. Additionally, many “mature” TV shows contain “R” rated movie qualities, and additionally have an enormous teen fanbase. For example, Game of Thrones is an American fantasy drama which contains heavy violence and sexuality but has many teenage fans eager to watch from all over the country.

Additionally, teenagers are being charged for the adult price of a ticket at the average age of 12, but are still being treated as kids. Once you become an “adult” in the movie theater, you immediately no longer pay kid price. Then why, if you’re considered an adult at age 12, would they restrict certain “adults” from watching movies? Some younger seniors in high school can’t even watch an R-rated movie with their friends who are over 17 because they have to be supervised by someone older than 25 when watching the movie.

Also, at the age of 16, any United States teen is eligible to apply for a driver’s license. How come the government allows teens to drive cars but not to watch R-rated movies? This is an outrageous and ridiculous disconnect. Having your driver’s license is a major responsibility. You must continue to demonstrate your ability to drive safely on the road, as there are repercussions for bad driving actions. If you fail to demonstrate this ability, than you can be issued driving tickets, get your license revoked, or even put the lives of others and yourself in danger. Movies, on the other hand, do not rely on the responsibility and actions of the teens watching them.

Teens mature and grow at different rates and it is understandable for a parent to feel as though their teen isn’t “ready” to see adult content. But in the end, it’s all a part of growing up. R-rated movies containing graphic violence, nudity and bad language are all many factors a child will be exposed to some time in their lifetime. Prohibiting a teen from watching a movie only shelters them. In fact, allowing exposure to such content can open up conversations about similar real-world scenarios. As seen through recent bloody news coverage and violent current events, kids are already witness to daily events that would be considered R-rated. We should allow kids to watch more realistic and mature movie content as it provides opportunities for discussion and can provide the child with something new to learn. During a child’s development into a young adult, certain morals are instilled into their brain as they learn from their mistakes and others around them. If general life lessons are permanently implanted into a kid’s brain, then one movie won’t alter them.

Parents may believe that being exposed to quite a mature movie will tarnish their child’s innocence and convey the wrong message into their kid’s brain. It is understandable that many parents are concerned that R-rated movies can influence a child to make rash, or bad, decisions. However, every parent should be allowed to make that decision privately; there is no need for legal restrictions.