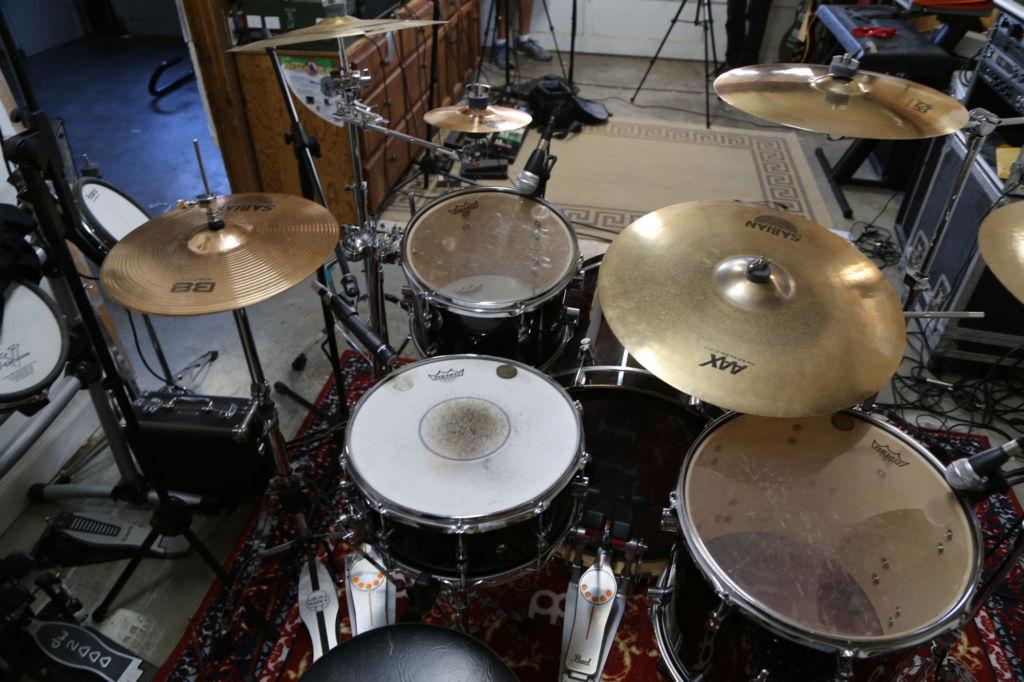 Senior Russell Camden sits behind his drum set, headphones in, drumming along to a metal song. The drumsticks in his hands are a blur of movement, followed by the crashing sound of a cymbal. Marco Zazzeron, another Redwood Senior, shares the same interest. Zazzeron stares off to the right, hyper-focused, as he hits down on the drum, freestyling a blues-infused beat. Though they do not play together, both Russell and Zazzeron have been developing their drumming skills for years.

Both Zazzeron and Russell discovered their raw talents early on in life. According to Zazzeron, he grew up in a family of musicians and was drawn to his father’s drum set at age six. Similarly, Russell has also grown up with a musician in the family, his father being a guitar player who was once in a high school cover band.

“There was a wonderful quote by Phil Collins, a very famous drummer, who said ‘If you go to see a band and they’ve got a great drummer, you can forgive just about anything else and you can listen to that drummer, but if you go see a band and the drummer is off, the evening is over,’” said Russell’s father, Dale Camden.

Russell wanted to start playing as soon as possible. Though he started small, with only a pair of drumsticks, Russell eventually got a true drum set.

“I hit upon the idea of merely getting [Russell] a set of drumsticks and seeing what he did, and he probably struck everything in the house with those sticks, in rhythm, for the next nine months,” Dale said.

This sort of determination and drive is needed to be a drummer. Without daily practice, according to Russell, it is very difficult to make a noticeable improvement. However, with the stress of life and school, there are days that Russell and Zazzeron are not in such a musical mood. However, they do their best to get in a daily practice or jam session.

Though Russell and Zazzeron do not play together, they share the

same musical creativity that has them constantly creating new beats. On days where they may not be sitting behind the drum set, they are still impulsively tapping a rhythm on a desk or their laps.

“Some days, I’m tired and I just start playing. I don’t play with any emotion, I’m just hitting it without really feeling anything or doing anything creative and [those practices] just aren’t worth it,” Zazzeron said.

The two drummers have different preferences about the style of music they practice and play. Russell stated that when he sits down to practice or jam, his preferred types of music are metal and alternative rock. According to Russell, he’s been drawn toward those genres since before he received his first set of drums.

Zazzeron enjoys more funk and blues, and expressed interest in bands like the Beatles and great artists like Zeppelin because of their jazz and blues influence and sound.

“There is a certain cultural aspect to [blues] music that gives it that dark but hopeful feeling to it which draws me to that music. Punk music or alternative rock normally doesn’t have any blues influence to it and when I listen to it, it just doesn’t draw me in like how a blues rock song does,” Zazzeron said.

Zazzeron has been practicing standard drum patterns called rudiments, which he learned from a drum teacher who taught him for six months. Through this practice, Zazzeron gained the ability to create a groove with his beat; the rudiment patterns act as a basis to any freestyle beat he may produce.

“Playing more and more helped my speed develop. Playing has become almost unconscious to a point because now I don’t even think about what rudiment I’m going to play. It just comes out,” Zazzeron said.

Russell also practices certain standard drumming patterns. He learns specific patterns through practicing in front of sheet music and turning on a metronome to help with timing. Through his practice, Russell feels that he has been able to widen the scope of his abilities.

“Dynamically I have improved the most because I listen to a lot of metal which is very straightforward and hard hitting and it doesn’t have a lot of ‘push pull,’ but then I started playing more funk and that is when I developed more of a dynamic balance,” Russell said.

Though both musicians use this more formal way of practicing and developing their skills, both Zazzeron and Russell prefer to let what they feel dictate what they play.

Russell and Zazzeron have the same hope to one day join a band and pursue drumming as a career after high school. As far as college is concerned, neither Zazzeron nor Russell intend on applying with a music focus. Zazzeron stated his reason is to ensure that he has options open if his dream falls short. However, he still plans to strive for a profession in drumming.

“Life gets in the way of passions and hobbies and that sucks,” Russell said. “But at the same time, if you can implement it into your everyday routine, there is always a chance that something is going to work out and I plan on putting myself out there and using my talents and abilities to get me somewhere with what I want to do.”