Matadors overwhelm the Giants in a first round knockout 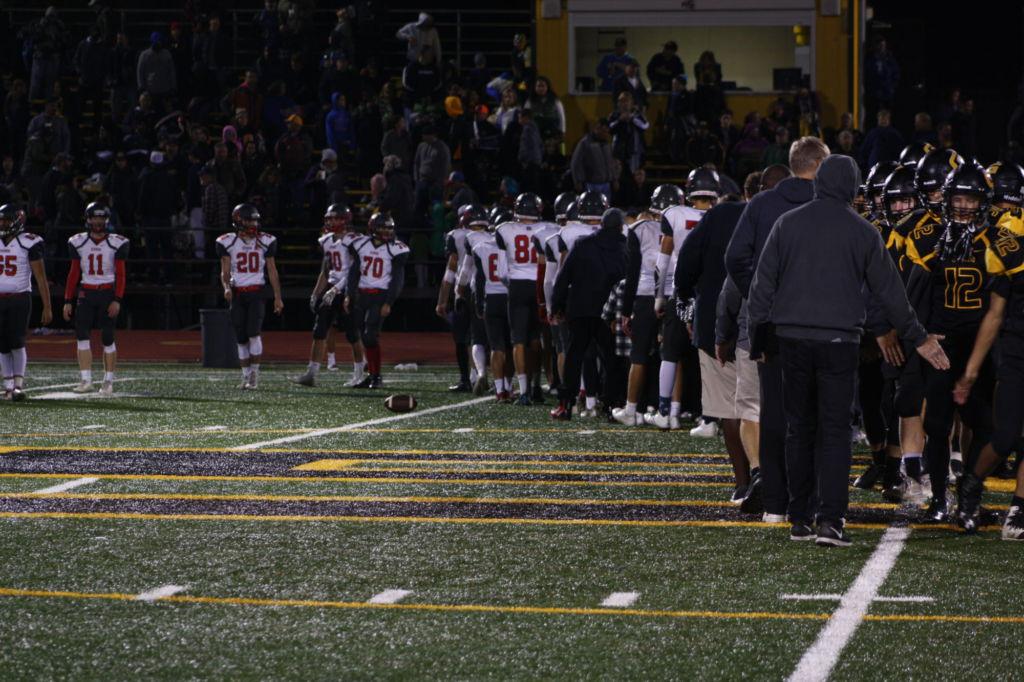 It’s 7 p.m. on a cold Saturday night in Livermore, Calif. on Nov. 11. The Giants are seeded 15th in the North Coast Section (NCS) playoffs, playing the second-seeded Granada Matadors. The Matadors’ stands are completely filled and a school band plays by the field.

The Giants have now gone back-to-back years in the NCS playoffs; last year they made it to the second round. Unfortunately, luck was not on the Giants’ side this game as a series of penalties forced loss of yards and a head-to-head collision in the second quarter resulted in the loss of junior running back Alex Aguero. The Giants lost in a blowout of 42-0.

Junior defensive end and wide receiver Jack Morken thought the loss of Aguero was a big hit to the team both emotionally and physically.

“He’s one of our best players and our second string running backs are sophomores who don’t have lot of experience. We definitely lost his skill set, a leader and his experience,” Morken said.

Many times the Giants’ defense was able to keep the Matadors stagnant until the third down, where the Matadors ran a sweep for first down. A sweep is generally a handoff or pitch to the running back, who will run outside of the offensive lineman with everybody else blocking in front of the running back.

The Giants’ offense did not fare much better. The Matadors focused on penetrating the offensive line and on junior quarterback Sam Warren, leading to several scrambling throws by Warren and little yard gainage on the Giants’ runs.

Senior lineman Gabe Gordon believed that the defense didn’t adapt well enough to the way the Matadors’ offense was run.

“They ran a bunch of bump sweeps. We didn’t really adjust. I don’t think they adjusted well, I think they should have realized what [the Matadors] were doing pretty quickly,” Gordon said.

According to senior wide receiver Joe Lewis, the team didn’t come out as strong as they could have.

“Preparedness-wise, we thought that we’d go in there and do what we normally do. We never really adjusted to what they were doing offensively and defensively,” Lewis said.

In the second quarter, the Matadors once again scored within the first five minutes, making the score 21-0. On the response drive, the Giants were hit hard, losing Aguero in a head-to-head contact hit.

Despite the loss of Aguero, the Giants were able to move downfield. Warren was able to throw a 30-yard pass down to senior tight end Matthew Mulcahy to get within 10 yards of a touchdown. Unfortunately, a series of penalties continuously pushed the Giants back out of field goal range.

On the turnover, the Matadors ran a series of sweeps past the Giants’ right side to score another touchdown. The score entering half time was 28-0.

The third quarter was more competitive, with a series of back-and-forth offensive and defensive drives between the two teams. Freshman wide receiver Geordie Aarsheim and sophomore running back Rudy Washington, who stepped in for Aguero, helped keep the offense moving downfield.

According to Gordon, Aarsheim and the other sophomores will be valuable assets in the future.

“Geordie is going to be a monster. He’s going to have years to develop. Joey Calzaretta and Kobe Gerstein are both going to be really good when they develop,” Gordon said.

Despite the underclassmen performances, penetration of the offensive line left them scrambling to throw the ball away. Towards the end of the quarter, the Matadors threw a touchdown pass on third down to make the game 35-0.

The fourth quarter remained a struggle for momentum between the teams. The Matadors were able to run a series of sweeps to the right side to break through, scoring on a sweep to end the game 42-0.

This year’s record of 3-7 was not as favorable as the previous year’s record of 9-3, but the Giants were still able to make another appearance at the playoffs. Lewis believes that Redwood football’s future is in great hands with the incoming freshmen and sophomores who came up to varsity for this game.

“From how the underclassmen season[frosh-soph] went, there’s a lot of good to come in the future for Redwood. They had an outstanding year, only lost once and beat [Marin Catholic],” Lewis said. “Once they get to their varsity season, there’s going to be some great seasons to come.”