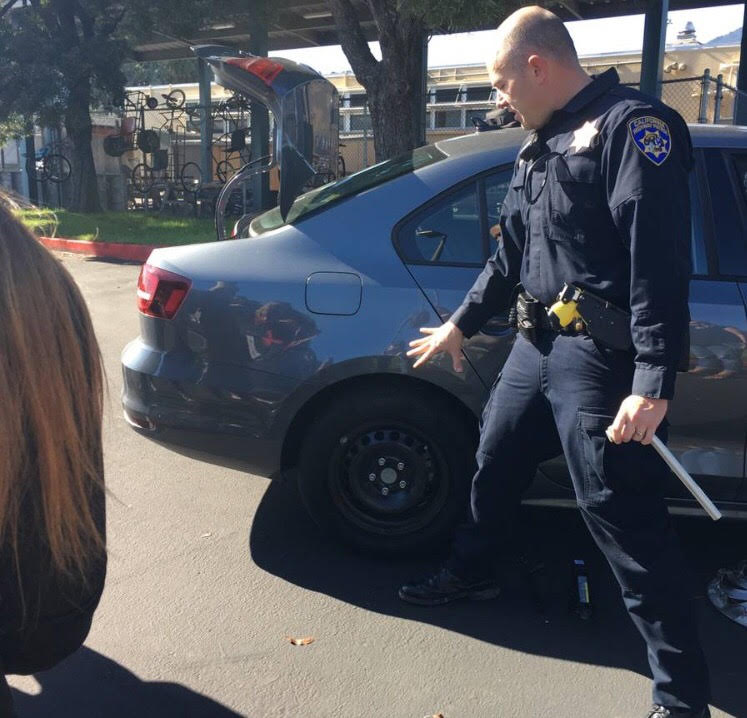 CHP officer comes to school to show the club how to change a tire. (Courtesy of Natalie Veto)

Imagine you’re stuck on the side of the road with a flat tire. You have no service and haven’t seen a car drive by for the past ten minutes. You’ve spent most of your life in school preparing for adulthood, yet you probably know more about MLA citations than you do about changing tires. Why does school spend so much time focusing on math, English and science but never teach you day-to-day tasks that you need to succeed as an adult?

Senior Natalie Veto thought that it was important to learn life skills at school and started the How To Grow Up Club last year. The How to Grow Up Club focuses on learning different life skills such as how to change a tire or how to properly set a table.

This idea originally came to Veto while attending a camp at Stanford called Miss CEO when her group was assigned a project to create an action plan   .

“Me and a couple of my friends [at camp] decided to start the club because we don’t learn a bunch of things in school that we need to learn for life,” Veto said.

This project was supposed to be hypothetical and just practice as a part of the camp activity, but when Veto started school that fall she decided to actually create the club.

“I thought to myself, I’m actually going to do it, I really like the idea and I think it’s really valuable and we have the resources around us to do it,” Veto said.

This year Veto has an organized schedule with a calendar and emails sent out to all of the guests she hopes will visit a club meeting to teach a lesson. Some of the lessons that the club members are going to learn this year include how to properly set a table and what to do if they get pulled over or in an accident. This is the lesson Veto is most excited for, as a California Highway Patrol (CHP) officer will be coming in to speak to the club about how to properly handle this situation.

“It’s one of those things I should know. I’ve been driving for three years and you don’t know, and when you’re in the situation you realize you don’t know and nobody taught you this,”

Next year when Veto goes to college she hopes that the club stays active at Redwood but said that she has no confirmation that it will. Veto believes that the How to Grow Up Club could continue being powerful if people take the time to think it through and get the right guest speakers. She hopes that instead of taking it to college next year she can go to local middle schools and teach them the skills she has acquired.

The How To Grow Up Club meets every other Wednesday at lunch in room 153.