Baseball players venture to Cuba to give back to community 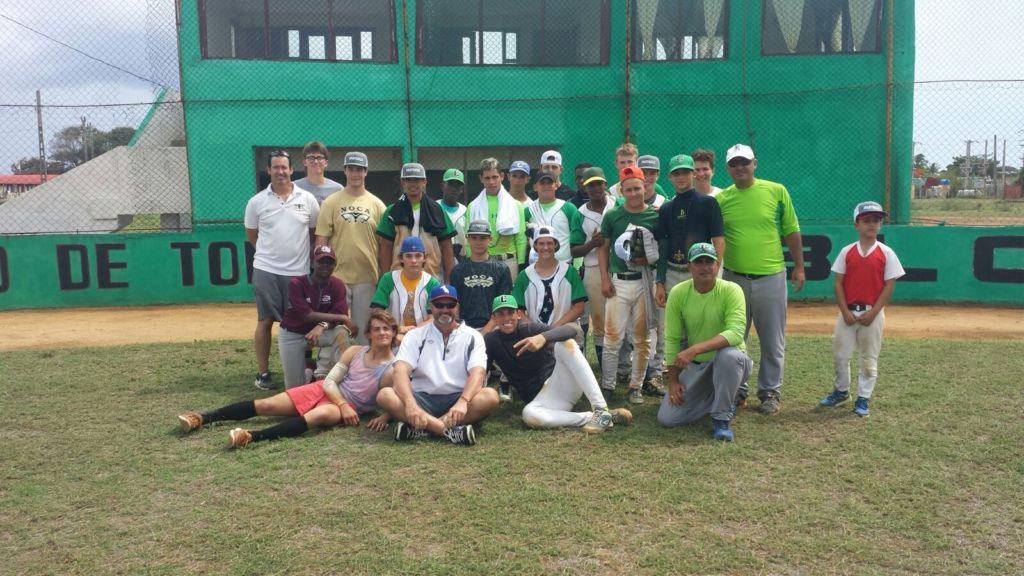 This past summer, Redwood varsity baseball player, junior Jackson Barry, and JV players junior, Jake Nordstrom and Erik Simonson, ventured to Cuba as a part of a community service trip to both expand their cultural experience and further their sports careers. They traveled to Havana and Viñales with a New Orleans baseball team from June 11-19. In Cuba, they gave back to the community through volunteering and played four baseball games against a Cuban team.

The boys first flew to Havana, Cuba, and stayed at a private lodging home. On their second day, they went to Jovellanos to meet community leaders. They learned of the local church’s work to support the community by delivering foodstuffs to families in their homes by horse and buggy and interacting with disabled children according to their daily schedule.

Junior Erik Simonson found the experience of giving back to the community to be a total culture shock.

“I found out that the average Cuban only makes $25 a day, so the supplies we delivered made a huge impact on their life. It’s awesome to know that my little gesture went a long way,” Simonson said.

Their community service included cleaning local beaches, interacting at the Viñales community center with children, and delivering donations such as food and clothes to houses in the locals.

Connected through a former baseball coach, they were asked to accompany a New Orleans baseball team who needed a few extra players.

“The Cuban players were a lot younger than us, but they were just as good, if not better, since the competition is a lot tougher in Cuba,” Barry said.

The equipment used in Cuba is a lot different than the typical equipment used in America. The baseballs were wrapped in electrical and duct tape, and their baseball bags were sandbags due to their lack of resources, according to Erikson.

According to Nordstrom, he did not face the pressure to do well in the same way as in past baseball experiences. Nordstrom was surprised to see how different cultures interpret different sports compared to the United States, and on a smaller scale, Redwood.

Barry found the experience of giving back to the community far more important and meaningful than playing baseball. They only played four baseball games in total over the course of nine days.

“My biggest takeaway is to not take anything for granted, even the small things I have in my everyday life, because someone out in the world is always going to have it worse than me,” Barry said. “The kids in Cuba always had a smile on their faces even though they lived in the worst circumstances I had ever seen.”

In addition to giving back to the community and playing baseball, they also had time to tour Cuba. They hiked the rainforest with a resident naturalist and ziplined over a coffee plantation. They also got to engage with local citizens by practicing their Spanish throughout the trip.

“One of my favorite parts was being able to communicate with the locals through Spanish. I loved being able to use what I’ve learned and apply my Spanish to real-world conversation since most of the time I’m speaking Spanish [when] it’s just in a classroom at school,” Nordstrom said.

Since Americans have only recently been allowed to travel to Cuba and there is still a trade embargo against the nation, the cultural dynamic of the country is a lot different compared to the United States.

“I noticed in groceries stores there was only one brand of everything, which is the opposite of stores we have here. You can go into somewhere like Safeway and there’s at least five brands for the same item,” Barry said.

A takeaway for all three of the players was the connections they built with the players they met on the Cuban teams. After each game they played they would go to a player’s house to swim or meet them for team dinners. Unfortunately, they have not been able to communicate with any of the Cuban players since they ended the trip due to the Cuban players’ lack of ability to use communication technology.

“I would go back 100 percent, I miss the kids so much. This trip was a life-changing experience I’m never going to forget,” Barry said.