Varsity volleyball’s tenacious offensive digs up a win vs. Bulldogs 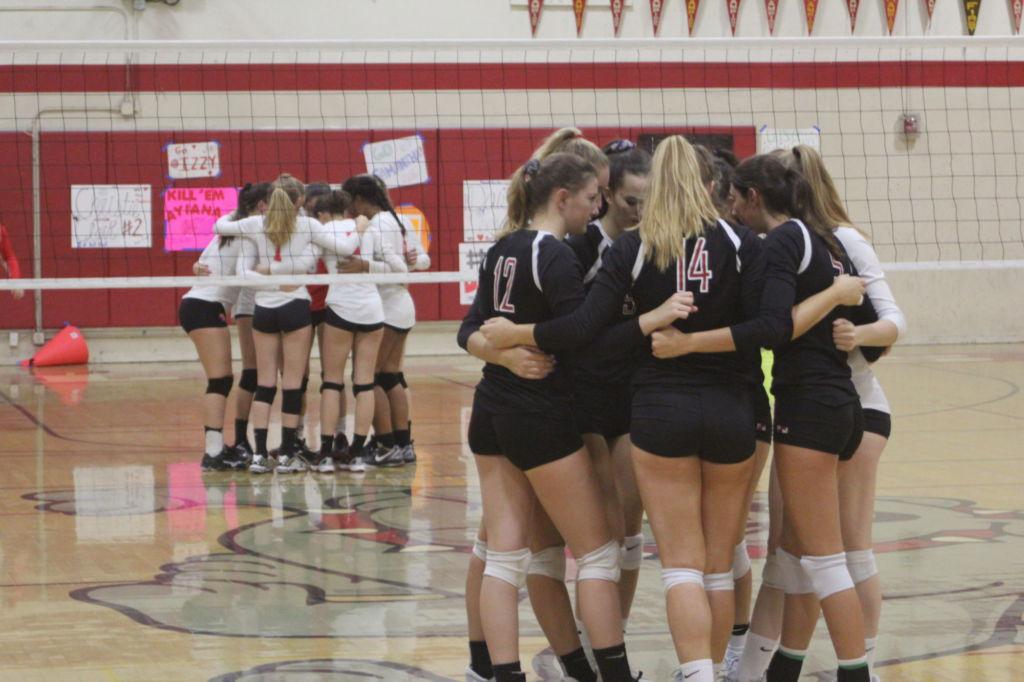 After losing to the Branson Bulls the night before, the girls’ varsity volleyball swept the San Rafael Bulldogs in three sets to none on Thursday, Oct. 19, advancing their record to 8-4 in MCALs.

The Giants had easily beaten the Bulldogs earlier in the season, so their focus going into their game was to minimize their defensive errors and missed serves.

By concentrating on improving those specific aspects of their game, Redwood was able to comfortably slide into the playoffs with confidence, momentum and a win under their belt.

Moreover, with a sudden halt in both practices and games last week due to poor air condition (https://redwoodbark.org/2017/10/13/raging-wildfires-force-cancellation-sports-school/), a high-energy, lively and inclusive game was just what they needed to help the Giants get their momentum back before the playoffs.

“Last night we had a tough loss, so I was happy to see them be comfortable and play their aggressive game on the offensive side,” said coach Tahan Minakov. “It was really good to shake off some of the rust we have had from not practicing or having any games last week.”

According to Minakov, the Giants’ goal going into the game was to get their consistency back, and in order to execute that they needed to stay attentive for the entire game.

“It is tough to stay focused in a game like this where the opponent is not playing as fast as us, but we were definitely able to maintain our aggressiveness through the whole match,” Minakov said. “That is the exact type of energy we need going into the playoffs.”

According to Minakov, the team is ready to go mentally and physically, and they simply need to maintain their forceful offense rolling into their playoff game.

According to senior captain Raya Corren, the Giants were very excited for their last MCAL regular season game where they could strive to win with an attitude of consistent competitiveness.

“It was really nice to get everyone playing time today, and cheer on those who don’t always get to be cheered on,” Corren said. “However, to beat Branson our back row defensive and services, specifically, are going to need to step it up.”

Because of their previous success in games against the Bulldogs, the team came into their last regular season game with a great deal of confidence, making it more enjoyable, according to Corren.

“Even though the seniors didn’t play a lot tonight, it was still super fun to see the younger teammates play and cheer them on,” Corren said. “It assures us, as seniors, that our legacy will still be there when the season is done.”

According to senior captain Alex Lefebure, the Giants are ready for their first playoff game at Redwood next Tuesday, Oct. 24 at 7 p.m. vs. the Justin-Siena Braves.