Balancing family and a restaurant business while making it seem effortless 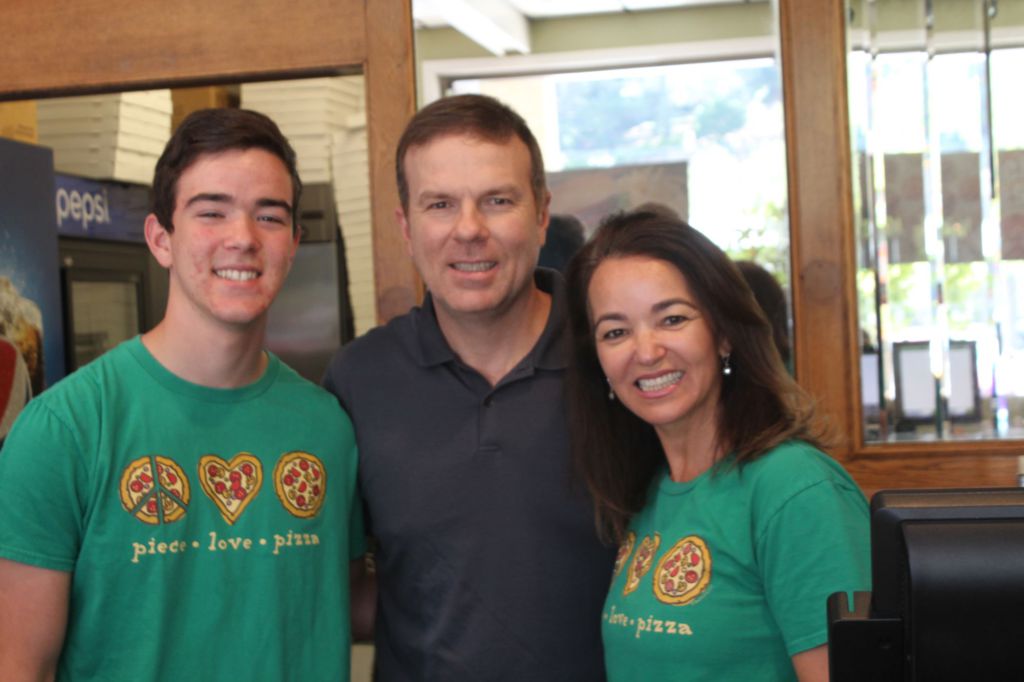 While several students find themselves ordering and taking out food, other students experience the restaurant industry through a different lens. Junior Luciano (Lu) Faria and senior Alyssa Saylor understand the strenuous efforts of owning a business through their family-run restaurants.

Lu’s parents, Luciano and Rosilene, have owned Rocco’s Pizza in Mill Valley for 20 years. After moving from Brazil when he was 19 years old, Luciano started to work for the company as a driver, then as a cook, an assistant manager, manager and five years ago, he became the owner.

“It started out with a few Brazilian people working there and now, basically our whole staff is Brazilian. So it’s really cool, it’s kind of like a little family. All of the Brazilian community: from the church and my mom and dad’s friends, they come over,” Lu said.

The move from Brazil to America had an immense impact on Luciano’s life and has helped shape him into the person he is today.

“I learned pretty much everything, even the English that I know, by making pizza and answering phones on an everyday basis. I learned how to survive in America from the pizza business. I am very grateful for what I got,” Luciano said.

Luciano works alongside his wife, son and 27-year-old daughter, who is the assistant manager.

Lu works there each Friday, Saturday and every other Sunday.

“I work and whenever my dad needs me, I try to go there. If my dad says, ‘Hey Luciano, I need a little help right now,’ I just come over. I like helping my parents because I know how hard it can be to have the business,” Lu said.

According to Luciano, he works for 13 hours on Fridays and about 10-12 hours on Saturdays.

“[Balancing work and family], it’s hard. Luckily, I have a lot of [family] working with me so I get to see them all the time, but it used to be easier when I had more people working for me. But right now, it is really hard. I work extra hours so I can take care of my business and also take care of my family,” Luciano said.

Despite the long hours, working with family definitely has its benefits, according to Luciano.

“I think [my children] appreciate more because they are involved with my everyday work at the pizzeria. They see how hard it is to earn money,” Luciano said.

Not only does Luciano see his children grasping the value of hard work, but he reflects upon his childhood and how he came to appreciate dedication.

“When I grew up, I saw that in my dad. We were middle class in Brazil. My dad really worked hard. We always helped him,” Luciano said.

Besides admiring his dad’s perseverance, he had direct experience with having a job in his early years.

“I started to work at the farm in Brazil when I was really young, when I was 12 years old. I always wanted to play more, but today I look back and say that was good because I learned how to take care of myself. I learned how to appreciate work, so I see that in my kids too,” Luciano said.

Lu acknowledges his dad’s efforts and admires his stamina.

“He is supporting our family, so I look up to him as inspiration because he works that hard and doesn’t complain. I really respect that,” Lu said.

Regardless of the number of hours spent at the restaurant, the Farias are still able to enjoy family dinners together at home.

“I’m very grateful. It is awesome having two amazing cooks at home. I’m super lucky. Being surrounded by great food, at home and in the restaurant, I’m super blessed by that,” Lu said.

Luciano also shares his gratitude towards his daily life.

“I don’t have a lot of free time, but when I do, I try to enjoy it as much as I can and have quality time with family,” Luciano said.

Regarding the future of the restaurant, Lu ponders over his share in the business.

“I always want to be present there. I don’t really want to continue to necessarily own it, but I always want to be there to support the business because it is what I have known for my entire life and I really care about [the restaurant],” Lu said.

Meanwhile, senior Alyssa Saylor’s dad, Sean Saylor, is the owner of Saylor’s Restaurant and Bar. Her mom, Sonja, does the paperwork for the business.

Located in Sausalito on Bridgeway, the establishment is a Mexican restaurant that has been open since 2008.

Sean, a Redwood alumnus, started his culinary career locally, working at Red Boy Pizza in Larkspur when he was 15 years old, working there for six years. Following this job, he worked at multiple other restaurants before attending California Culinary Academy, where he graduated at the top of his class.

After this success, he decided that he wanted to own a restaurant. He first opened Saylor’s Landing on Harbor Drive in Sausalito, which was closed in 2007 and replaced by Saylor’s Restaurant and Bar.

“Owning a restaurant is really stressful because there are so many bodies to worry about. You have to take inventory and you have to make sure everything is in order and is clean. And when a customer walks in, [you have to make sure that] it is inviting and it is nice to be there,” Alyssa said.

Alyssa occasionally works there if they are short of staff and will help her dad out if there is a large party or catering.

Alyssa has also learned several significant lessons from this aspect of her life.

Alyssa has also been able to determine what traits make for a successful restaurant owner.

“[The most important qualities to have when owning a restaurant] are perseverance, a passion for cooking and hospitality for sure. Hospitality, I think, is actually one of the biggest. I think being a perfectionist, in a way, [is important] because everything needs to be clean all the time,” Alyssa said.

Through the restaurant business, Alyssa has also made several meaningful connections.

“My dad has a ton of friends that he’s made through them coming in and being customers and I like having all those relationships with those people because they are kind of my friends too and they all know me,” Alyssa said.

When it comes down to the heart of the industry, Alyssa is assured that all of the work is ultimately fulfilling.

“Owning a business is very very difficult to do, but as long as you love what you are doing, it is totally worthwhile,” Alyssa said.